The North-Western Territory was a region of British North America extant until 1870 and named for where it lay in relation to Rupert's Land.

Due to the lack of development, exploration, and cartographic limits of the time, the exact boundaries, ownership, and administration of the region were not precisely defined when the territory was extant. There is also not a definitive date when the British first asserted sovereignty over the territory. Maps vary in defining the boundaries of the territory; however, in modern usage, the region is generally accepted to be the region bounded by modern-day British Columbia, the continental divide with Rupert's Land, Russian America (later Alaska), and the Arctic Ocean. The territory covered what is now the Yukon, mainland Northwest Territories, northwestern mainland Nunavut, northwestern Saskatchewan, and northern Alberta. Northern modern-day British Columbia is sometimes also considered to have been part of the territory as well.

It is obscure when exactly the United Kingdom first asserted sovereignty over the territory; however, after France accepted British sovereignty over the Hudson Bay coast by the Treaty of Utrecht (1713), the UK was the only European power with practical access to that part of the continent. The Hudson's Bay Company, despite the royal charter assigning only Rupert's Land to the company, had long used the region as part of its trading area. The North West Company also hunted and trapped on the land and this led to frequent conflicts between the companies. [2] To ease tensions, the UK government assigned administrative duties to the HBC, while still allowing The North West Company to hunt on the lands with the passage of "An act for regulating the fur trade, and establishing a criminal and civil jurisdiction within certain parts of North America", in 1821. [3] [4] As well, large areas of Rupert's Land were not accurately mapped then to know the precise boundaries. The British made almost no effort to assert sovereignty over the aboriginal peoples of the area. In accordance with the Royal Proclamation of 1763, large-scale settlement by non-aboriginal people was prohibited until the lands were surrendered by treaty. [5] 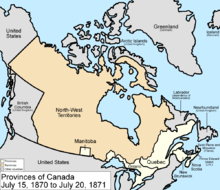