From Wikipedia, the free encyclopedia
Churches which distance themselves from the confessionalism or creedalism of other Christian communities

Nondenominational Christianity first arose in the 18th century through the Stone-Campbell Restoration Movement, with followers organizing themselves simply as " Christians" and " Disciples of Christ". [note 1] [2] [3] [4] [5]

Often congregating in loose associations such as the Churches of Christ, or in other cases, founded by individual pastors, they have little affiliation with historic denominations, [3] but many typically adhere to evangelical Christianity. [6] [7] [8] [9] 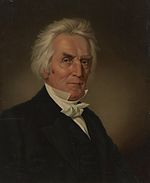 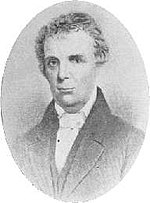 Alexander Campbell and Barton Stone believed in a Nondenominational Christianity, which they spread in what is known as the Restoration Movement. [4] [5] 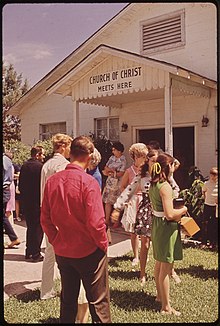 Christians gather at a nondenominational congregation of the Churches of Christ in Texas.

Independent nondenominational churches continued to appear in the United States in the course of the 20th century. [10]

In Asia, especially in Singapore and Malaysia, these churches are also more numerous, since the 1990s. [16] 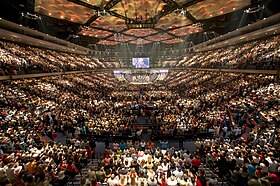 Worship service at Lakewood Church, a nondenominational megachurch, in 2013, in Houston, United States

Nondenominational churches are recognizable from the evangelical movement, even though they are autonomous and have no other formal labels, such as the Church of the Highlands and the Willow Creek Community Church. [19] [20] [21]

The movement is particularly visible in the megachurches. [22] [23]

The neo-charismatic churches often use the term nondenominational to define themselves. [24]

Churches with a focus on seekers are more likely to identify themselves as nondenominational. [25]

Boston University religion scholar Stephen Prothero argues that nondenominationalism hides the fundamental theological and spiritual issues that initially drove the division of Christianity into denominations behind a veneer of "Christian unity". He argues that nondenominationalism encourages a descent of Christianity—and indeed, all religions—into comfortable "general moralism" rather than being a focus for facing the complexities of churchgoers' culture and spirituality. Prothero further argues that it also encourages ignorance of the Scriptures, lowering the overall religious literacy while increasing the potential for inter-religious misunderstandings and conflict. [26]

Baptist ecumenical theologian Steven R. Harmon argues that "there's really no such thing" as a nondenominational church, because "as soon as a supposedly non-denominational church has made decisions about what happens in worship, whom and how they will baptize, how and with what understanding they will celebrate holy communion, what they will teach, who their ministers will be and how they will be ordered, or how they relate to those churches, these decisions have placed the church within the stream of a specific type of denominational tradition." [27] Harmon argues that the cause of Christian unity is best served through denominational traditions, since each "has historical connections to the church's catholicity ... and we make progress toward unity when the denominations share their distinctive patterns of catholicity with one another." [27]

Presbyterian dogmatic theologian Amy Plantinga Pauw writes that Protestant nondenominational congregations "often seem to lack any acknowledgement of their debts and ties to larger church traditions" and argues that "for now, these non-denominational churches are living off the theological capital of more established Christian communities, including those of denominational Protestantism." [28] Pauw considers denominationalism to be a "unifying and conserving force in Christianity, nurturing and carrying forward distinctive theological traditions" (such as Wesleyanism being supported by Methodist denominations). [28]

In 2011, American evangelical professor Ed Stetzer attributed to individualism the reason for the increase in the number of evangelical churches claiming to be non-denominational Christianity. [29]