From Wikipedia, the free encyclopedia
Legislative branch of the state government of New York

Legislative elections are held in November of every even-numbered year. [5] Both Assembly members and Senators serve two-year terms. [6]

The Assembly consists of 150 members; they are each chosen from a single-member district. The New York Constitution allows the number of Senate seats to vary; as of 2014, the Senate had 63 seats. [8]

The Assembly Speaker and Senate Majority Leader control the assignment of committees and leadership positions, along with control of the agenda in their chambers. The two are considered powerful statewide leaders and along with the Governor of New York control most of the agenda of state business in New York.[ citation needed]

The Legislative Bill Drafting Commission (LBDC) aids in drafting legislation; advises as to the constitutionality, consistency or effect of proposed legislation; conducts research; and publishes and maintains the documents of the Legislature, such as the Laws of New York. [10] [11] The LBDC consists of two commissioners, the Commissioner for Administration and the Commissioner for Operations, each appointed jointly by the Temporary President of the Senate and the Speaker of the Assembly. [12] 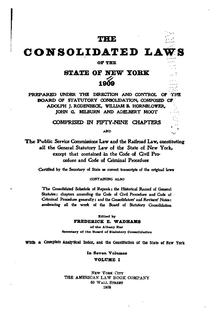 The Legislature is empowered to make law, subject to the governor's power to veto a bill. However, the veto may be overridden by the Legislature if there is a two-thirds majority in favor of overriding in each House. Furthermore, it has the power to propose New York Constitution amendments by a majority vote, and then another majority vote following an election. If so proposed, the amendment becomes valid if agreed to by the voters at a referendum.[ citation needed]

The legislature originated in the revolutionary New York Provincial Congress, assembled by rebels when the New York General Assembly would not send delegates to the Continental Congress.[ citation needed]

The New York State Legislature has had several corruption scandals during its existence. These include the Black Horse Cavalry and Canal Ring. [16] [17]

In the 1840s, New York launched the first great wave of civil procedure reform in the United States by enacting the Field Code. The Code inspired similar reforms in 23 other states, and gave birth to the term " code pleading" for the system of civil procedure it created.[ citation needed]

Five assemblymen were expelled in 1920 for belonging to the Socialist Party. [21]

There is said to be a compact to which members of the New York Legislature unofficially adhere a code of silence regarding behavior such as illicit extramarital affairs or other embarrassing behavior. [22]