New York Life Insurance Company (NYLIC) is the third-largest life insurance company in the United States, [5] the largest mutual life insurance company in the United States [6] and is ranked #67 on the 2021 Fortune 500 list of the largest United States corporations by total revenue. [7] NYLIC has about $593 billion in total assets under management, and more than $25 billion in surplus and AVR. [8] In 2019, NYLIC achieved the best possible ratings by the four independent rating companies (Standard & Poor's, AM Best, Moody's and Fitch). [9] Other New York Life affiliates provide an array of securities products and services, as well as institutional and retail mutual funds.

Advertisement from Shole's Directory of the City of Macon, December 1st, 1894.

In its early years (1846–1848) the company, along with other insurance companies of the day including Aetna and US Life, insured the lives of slaves for their owners. By 1847 these accounted for one‑third of New York Life's policies. [10] The board of trustees voted to end the sale of insurance policies on slaves in 1848. [10] The company also sold policies to soldiers and civilians involved in combat during the American Civil War and paid claims under a flag of truce during that time. [14] [15] In the late 1800s, the company began employing female agents. [16]

New York Life continued to grow throughout its first 100 years as the national population and the market for life insurance increased. [17] New York Life's growth was in part fueled by its introduction of a system by which the company used agents to find new business. [17] In 1892, company President John A. McCall introduced the branch office system: offices that served as liaisons between New York and field agents. [17]

In 1894, the company became the first US-based insurance provider to offer life insurance to women at the same cost as men; social reformer Susan B. Anthony was one of the company's first female policyholders. [18] In 1896, New York Life became the first company to insure people with disabilities or in hazardous occupations. [18]

New York Life, along with other insurance companies, relaxed the claims process for missing persons in the wake of the September 11 attacks. [17] Fearful of the stability of the market during the two years prior to the financial crisis of 2007–2008, New York Life moved its cash into other investments such as treasury bonds. [15] In the ensuing financial crisis, New York Life Insurance Company rejected assistance from the U.S. Treasury Department. [22]

Following the 2013 acquisition of Dexia Asset Management, later renamed Candriam Investors Group, New York Life Investments became one of the largest asset managers worldwide, with access to markets in Europe, Asia and Australia, in addition to the United States. [23]

In November 2021, the company announced that company president Craig DeSanto was replacing CEO Ted Mathas, The transition was finalized in April 2022, and Mathas stayed with the company as a non-executive chairman. [1] 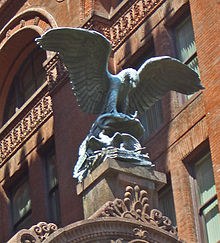 New York Life Investments is a subsidiary global asset management business which serves both institutional and retail clients. [29] It ranks No. 26 by total worldwide institutional assets under management, according to Pensions & Investments' Largest Money Managers Survey 2017. [30]

The group manages money through independent investment boutiques. [31] These boutiques include:

By the end of 2019, New York Life had earned the highest financial strength ratings from major four rating agencies: A++ from A.M.Best, AAA from Fitch Ratings, Aaa from Moody and AA+ from Standard & Poor's. [9]