The New York Liberty is an American professional basketball team based in Brooklyn, New York City, which plays in the Women's National Basketball Association (WNBA) as part of the Eastern Conference. The team was founded in 1997 and is one of the eight original franchises of the league. The team is owned by Joe Tsai, the majority owner of the Brooklyn Nets. The team's home games are played at Barclays Center.

The Liberty have qualified for the WNBA Playoffs in fourteen of its twenty-four years. The franchise has been home to many well-known players such as Teresa Weatherspoon, Rebecca Lobo, Becky Hammon, Leilani Mitchell, Essence Carson, Cappie Pondexter, Tina Charles, and the team's first-ever No.1 overall Draft pick Sabrina Ionescu. The Liberty have four conference championships and have played in the WNBA Finals four times, falling to the Houston Comets in 1997, 1999, and 2000, and losing to the Los Angeles Sparks in 2002. They have the most appearances in the WNBA Finals without a championship.

Prior to the team's first season, to avoid potential trademark infringement, the team purchased the trademarks of the defunct Liberty Basketball Association.

When the WNBA opened in 1997, the Liberty were one of the first teams to choose a player, and they signed college superstar Rebecca Lobo ( UConn) to a contract. Lobo was a starter for two seasons, but was injured in 1999. Her injuries eventually led to her retirement several seasons later. Point guard Teresa Weatherspoon emerged as a star, and the Liberty made it to the 1997 championship game, where the team lost to the Houston Comets. In 1999, they added Crystal Robinson with the 6th overall pick [3] and returned to the WNBA Finals, where they again faced the Comets. In Game 2, Teresa Weatherspoon's halfcourt shot at the buzzer gave the Liberty a one-point road win that tied the series at a game apiece. However, the Liberty lost the third game of the series and the Comets became champions for a third straight time.

In 2000, the Liberty traded for Tari Phillips who blossomed in New York and made four straight All-Star teams. In 2001, Weatherspoon became the WNBA's all-time assist leader. Teamed with Robinson, Phillips and an emerging Sue Wicks, who was once a back-up to Lobo at forward but made the 2000 All-Star game, Weatherspoon and the Liberty subsequently returned to the finals in 2000 and 2002, but lost once again to the Comets and to the Los Angeles Sparks, respectively. The Liberty also advanced to the WNBA Eastern Conference Finals in 2001. 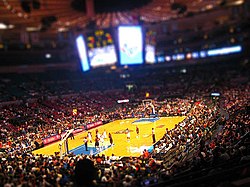 The 2003 season marked a transition for the Liberty and with team leader Teresa Weatherspoon's WNBA career winding down, fan favorite Becky Hammon emerged as a star player. The 2004 season saw Hammon replacing Weatherspoon as the team's starting point guard.

The Liberty played six of their home games during the 2004 season at Radio City Music Hall as Madison Square Garden was hosting the 2004 Republican National Convention. [4] These games marked the first time Radio City had hosted a professional sporting event since the Roy Jones Jr. boxing match held in 1999.

With team leader Tari Phillips being signed away to the Houston Comets, Ann Wauters emerged as a force at the team's starting center position in 2005. However, she was unfortunately injured midway through the season. The loss of Wauters was felt as the team was swept two games to none by the Indiana Fever in the first round of the playoffs.

The Liberty had a poor 2006 season, winning only 11 games, the fewest in franchise history.

At the beginning of the 2007 WNBA season, the team traded Becky Hammon to the San Antonio Silver Stars for Jessica Davenport, a first round pick in the 2007 WNBA Draft. They also acquired center Janel McCarville through the dispersal draft associated with the dissolution of the Charlotte Sting. The 2007 Liberty started out 5–0, then lost 7 straight games, then rallied at the end of the season to get the last playoff spot by winning 3 out of their last 4 games, beating the Washington Mystics on the tiebreaker of head-to-head record. In the Eastern Conference semifinals, the Liberty, as huge underdogs, faced the defending champion Detroit Shock in a best-of-three series. The Liberty defeated the Shock by winning Game 1 in New York. In Games 2 and 3 the Liberty lost both games to the Shock in Detroit, 76–73 and 71–70 (OT) respectively.

In 2008, the Liberty drafted former Rutgers shooting guard Essence Carson and former North Carolina forward Erlana Larkins, and signed former Utah point guard Leilani Mitchell during the preseason. Despite having the youngest average age of any WNBA team, the Liberty managed to win 19 regular season games in 2008, to defeat the Connecticut Sun in the first round of playoff action, and to come within two points of defeating the Detroit Shock in the third and last game of the Eastern Conference Finals. Again, the Detroit series entailed a Liberty victory at home in Game 1, followed by narrow defeats away in Games 2 and 3. The 2008 season also featured the " Liberty Outdoor Classic", the first ever professional regular season basketball game to be played outdoors, on July 19 at Arthur Ashe Stadium of the USTA Billie Jean King National Tennis Center. The Indiana Fever defeated the Liberty in the Outdoor Classic.

In the 2009 WNBA Draft, the Liberty selected local favorite Kia Vaughn from Rutgers. With a solid core group, the Liberty looked to be a contender in the East yet again.

In the 2009 season, however, they never proved to be a contender and the team fired head coach Pat Coyle. To replace Coyle, the Liberty hired then-Liberty assistant coach Anne Donovan on an interim basis. Despite the coaching change, the franchise continued to struggle, finishing 13–21, their second worst record in franchise history.

The New York Liberty fared better in 2010, during Donovan's first and only full season as head coach. Led by newly signed high scorer Cappie Pondexter (formerly of the Phoenix Mercury) and the 2010 Most Improved Player Award winner Leilani Mitchell, the team made it all the way to the Eastern Conference Finals, where they lost to the Atlanta Dream.

The team had high hopes for 2011, after the hiring of former WNBA champion head coach John Whisenant. Janel McCarville did not report to training camp, seeking time with her family, and as such, was suspended for the duration of the 2011 season. This caused division and discord within the New York Liberty fanbase. Kia Vaughn was unexpectedly thrust into the role of starting Center.

Pondexter and Plenette Pierson, along with improved play from Vaughn, allowed New York to be competitive early in the 2011 season. The team went into the All-Star break in third place in the Eastern Conference. In August, Sidney Spencer was traded to the Phoenix Mercury in exchange for Kara Braxton. By maintaining a fairly even standard of play, the Liberty made their way into the WNBA Playoffs. However, the Liberty fell to the Indiana Fever in the Eastern Conference Semifinals.

On May 5, 2015, the Liberty hired Thomas as Team President overseeing all business and basketball operations of the franchise. [5] Under Thomas' leadership as team president and the coaching staff led by Bill Laimbeer as head coach, the Liberty finished first in the Eastern Conference during the 2015 season. [6]

On August 2, 2015, during halftime at the game against the Seattle Storm, the New York Liberty inducted WNBA legend Becky Hammon into the Liberty's Ring of Honor. Thomas presented Hammon with her ring during the induction ceremony at Madison Square Garden. Hammon, a former New York Liberty point guard, is currently an NBA assistant coach for the San Antonio Spurs. [7]

After qualifying for the 2016 WNBA Playoffs, the Liberty lost to the Phoenix Mercury in the second round. [8]

In November 2017, the Madison Square Garden Company and James L. Dolan announced they were actively looking to sell the franchise. [9] After not immediately finding a buyer, MSG relocated most of the Liberty's 2018 home games to Westchester County Center in nearby White Plains, New York, the home of MSG's NBA G League team the Westchester Knicks, while still continuing to pursue a sale. [10]

On January 23, 2019, the Liberty were sold to Joseph Tsai, co-founder of the Alibaba Group, a Chinese internet company, who then owned 49% of the NBA's Brooklyn Nets. [11] During the 2019 season, the Liberty played two games in Brooklyn at the Nets' home of the Barclays Center, with the rest still in White Plains. Later that year, Tsai became the sole owner of the Nets and the Barclays Center. [12] For the 2020 season, Tsai relocated the Liberty to Brooklyn on a full-time basis. [13]

The Liberty were major players in the 2020 WNBA draft, entering that draft with three first-round picks plus two in the early second round. Shortly before the draft, they traded former league MVP Tina Charles to the Washington Mystics in a deal that also involved the Dallas Wings. [14] They chose Sabrina Ionescu as the first pick, with Megan Walker and Jazmine Jones selected later in that round. [15] The team also introduced a new logo, featuring a simplified version of their Statue of Liberty branding. The color black was also made one of the primary colors, echoing the aesthetic of their NBA brother squad, the Brooklyn Nets. [16]

The Liberty began the 2020 season, held in a "bubble" in Bradenton, Florida due to the COVID-19 pandemic, with seven rookies on their opening-night roster. [17] The team suffered a major blow in their third game, in which Ionescu suffered a severe ankle sprain that ultimately ended her season. [18] The Liberty ended the season with a league-worst 2–20 record.

Liberty games are broadcast on the YES Network, which is a regional sports network based in New York City. More often than not, NBA TV will pick up the feed from the local broadcast, which is shown nationally. Broadcasters for the Liberty games are Mike Crispino, Rosalyn Gold-Onwude and Julianne Viani.

All games (excluding blackout games, which are available on ESPN3.com) are broadcast to the WNBA LiveAccess game feeds on the league website. Furthermore, some Liberty games are broadcast nationally on CBS Sports Network, ESPN, ESPN2 and ABC. The WNBA has reached an eight-year agreement with ESPN, which will pay right fees to the Liberty, as well as other teams in the league. [22]

On May 22, 2019, the YES Network announced that it would broadcast 16 Liberty games for the 2019 season, adding to the network's existing basketball coverage of the Brooklyn Nets. [23] Previously, games had been broadcast on MSG Network.