A combination of aqueducts, reservoirs, and tunnels supply fresh water to New York City. With three major water systems ( Croton, Catskill, and Delaware) stretching up to 125 miles (201 km) away from the city, its water supply system is one of the most extensive municipal water systems in the world.

New York's water treatment process is simpler than most other American cities. This largely reflects how well-protected its watersheds are. The city has sought to restrict development surrounding them. One of its largest watershed protection programs is the Land Acquisition Program, under which the New York City Department of Environmental Protection (DEP) has purchased or protected, through conservation easement, over 130,000 acres (53,000 ha) since 1997. [1] With all the care given, the city's water supply system is exempted from filtration requirements by both the federal and the state government, saving more than "$10 billion to build a massive filtration plant, and at least another $100 million annually on its operation". [2] Moreover, the special topography the waterways run on allows 95% of the system's water to be supplied by gravity. The percentage of pumped water does change when the water level in the reservoirs is out of the normal range. 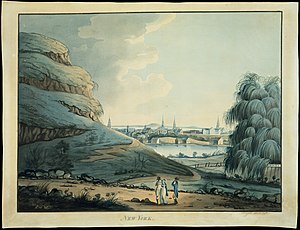 A 1798 watercolor of Collect Pond. Bayard's Mount, a 110-foot (34 m) hillock, is in the left foreground. Prior to being levelled around 1811 it was located near the current intersection of Mott and Grand Streets. New York City, which then extended to a stockade which ran approximately north–southeast from today's Chambers Street and Broadway, is visible beyond the southern shore.

Until the eighteenth century, New York City solely depended on primitive means such as wells and rainwater reservoirs to collect water for daily use. The first public well was dug in Bowling Green, New York, in 1677, and the first reservoir was built on the east side of New York in 1776 after the population grew up to 22,000. [3]

Collect Pond, or "Fresh Water Pond", [4] was a body of fresh water in what is now Chinatown in Lower Manhattan. For the first two centuries of European settlement in Manhattan, it was the main water supply system for the growing city. Later, the City was aware of its deteriorated water quality, owing to its rapid population growth (60,000 to 200,000 from 1800 to 1830), which had a considerable danger of causing epidemics.

In April 1831, a new water supply and distribution system opened, for fighting fires. It included a well and cistern on 13th Street between Bowery (today 4th Avenue) and Third Avenue, which was then at the northern fringes of the city. [a] The well was immense—16 feet across and 112 feet deep—blasted largely through rock, resulting in a quarry of over 175,000 gallons of water. A steam engine had the capacity to lift nearly half a million gallons a day. An octagonal iron tank, 43 feet in diameter and 20 feet high was installed atop a 27-foot high stone tower. Mains under Broadway and the Bowery delivered the water to hydrants on Pearl, William, Hudson, and a dozen other major streets, in six-, ten-, and 12-inch pipes, delivering water to a height of 60 feet above the highest streets. [5]

The Old Croton Aqueduct was established in 1842, and apart from a few inspections during the Civil War era the system has been running unceasingly ever since. [6] In the late 1800s, Additional aqueducts were systematically installed in New York City to fit the demand.

In 1905, the City's newly-established Board of Water Supply launched the Catskill Aqueduct project, which would play an additional role in supplying the City's ever-growing population of residents and visitors. In 1915, Ashokan Reservoir and Catskill Aqueduct were established. As the additions to the original, Schoharie Reservoir and Shandaken Tunnel was put into use 13 years later in 1928. [8] The Catskill System has an operational capacity of approximately 850 million gallons per day. To be noted, Catskill aqueduct is the furthest away from the City in the water system. The distance is approximately 125 miles. [9]

Responsibility for the city water supply is shared among three institutions: the New York City Department of Environmental Protection ("DEP"), which operates and maintains the system and is responsible for investment planning; the New York City Municipal Water Finance Authority ("NYW"), which raises debt financing in the market to underwrite the system's costs; and the Water Board, which sets rates and collects user payments.

The DEP has a workforce of over 7,000 employees. It includes three bureaus in charge of, respectively, the upstate water supply system, New York City's water and sewer operations, and wastewater treatment:

The NYW finances the capital needs of the water and sewer system of the city through the issuance of bonds, commercial paper, and other debt instruments. It is a public-benefit corporation created in 1985 pursuant to the New York City Municipal Water Finance Authority Act. The Authority is administered by a seven-member Board of Directors. Four of the members are ex officio members: the Commissioner of Environmental Protection of the City, the Director of Management and Budget of the City, the Commissioner of Finance of the City, and the Commissioner of Environmental Conservation of the State. The remaining three members are public appointments: two by the Mayor, and one by the Governor. [11]

The New York City Water Board was established in 1905. It sets water and sewer rates for New York City sufficient to pay the costs of operating and financing the system, and collects user payments from customers for services provided by the water and wastewater utility systems of the City of New York. The five Board members are appointed to two-year terms by the Mayor. [12]

New York City's water system consists of aqueducts, distribution pipes, reservoirs, and water tunnels that channel drinking water to residents and visitors. A comprehensive raised-relief map of the system is on display at the Queens Museum of Art. Until the early 21st century, some places in southeastern Queens received their water from local wells of the former Jamaica Water Supply Company. [13]

The water system has a storage capacity of 550 billion US gallons (2.1×109 m3) and provides over 1.2 billion US gallons (4,500,000 m3) per day of drinking water to more than eight million city residents, and another one million users in four upstate counties bordering on the system. Three separate sub-systems, each consisting of aqueducts and reservoirs, bring water from Upstate New York to New York City:

The latter two aqueducts provide 90% of New York City's drinking water, and the watershed for these aqueducts extends a combined 1,000,000 acres (400,000 ha). Two-fifths of the watershed is owned by the New York City, state, or local governments, or by private conservancies. The rest of the watershed is private property that is closely monitored for pollutants; development upon this land is restricted. [14] The DEP has purchased or protected over 130,000 acres (53,000 ha) of private land since 1997 through its Land Acquisition Program. [16] Water from both aqueducts is stored first in the large Kensico Reservoir and subsequently in the much smaller Hillview Reservoir closer to the city. [14]

The water from the reservoirs flows down to the Catskill-Delaware Water Ultraviolet Disinfection Facility, located in Westchester. [17] [14] The facility was built because chlorinated water might have unintended side effects when mixed with certain organic compounds, and ultraviolet was seen as the least risky way to clean the water of any microorganisms. [14] The UV facility opened on October 8, 2013, and was built at a cost of $1.6 billion. [18] The compound is the largest ultraviolet germicidal irradiation plant in the world; it contains 56 UV reactors that could treat 2,200,000,000 US gal (8.3×109 L) per day. [19] [20]

While all the water goes through the disinfectant process, only 10% of the water is filtered. The Croton Filtration Plant, which was completed in 2015 at a cost of over $3 billion, [21] [22] was built 160 feet (49 m) under Van Cortlandt Park in the Bronx and filters water from the Croton River. [23] The 830 by 550 feet (250 by 170 m) plant, which is bigger than Yankee Stadium, [21] is New York City's first water filtration plant. [22] It was built after a 1998 lawsuit by the presidential administration of Bill Clinton, which Mayor Rudy Giuliani settled under the condition that the city of New York would build the plant by 2006. The city had been studying possible sites for such a plant for more than 20 years in both the Bronx and Westchester. [24]

From the Hillview reservoir water flows by gravity to three tunnels under New York City. Water rises again to the surface under natural pressure, through a number of shafts. [14] The three tunnels are:

There are 965 water sampling stations in New York City. The water-sampling system has been in use since 1997. They consist of small cast-iron boxes with spigots inside them, raised 4.5 feet (1.4 m) above the ground. [27] Scientists from the city measure water from 50 stations every day. The samples are then tested for microorganisms, toxic chemicals, and other contaminants that could potentially harm users of the water supply system. In 2015, the DEP performed 383,000 tests on 31,700 water samples. [14]

In order to comply with federal and state laws regarding the filtration and disinfection of drinking water, the U.S. Environmental Protection Agency (EPA) and the New York State Department of Health called on the city to create a treatment plan to serve the Croton System. The underground filtration plant is under construction in Van Cortlandt Park. While the Bloomberg administration originally budgeted the project at $992 million in 2003, an audit by the city's comptroller placed the actual costs at $2.1 billion in August 2009. [28]

In 2008, the New York City water supply system was leaking at a rate of up to 36 million US gallons (140,000 m3) per day. [29] A complex five-year project with an estimated $240 million construction cost was initiated in November 2008, to correct some of this leakage.

The construction of Water tunnel No. 3 is intended to provide the city with a critical third connection to its Upstate New York water supply system so that the city can, for the first time, close tunnels No. 1 and No. 2 for repair. The tunnel will eventually be more than 60 miles (97 km) long. Construction on the tunnel began in 1970, and its first and second phases are completed. The latter opened with a ceremony under Central Park, in 2013. Completion of all phases is not expected until at least 2021. [30]

In 2018, New York City announced a US$1 billion investment to protect the integrity of its municipal water system and to maintain the purity of its unfiltered water supply. [31] A significant portion of the investment will be used to prevent the turbidity that might be caused by climate change, including relocating the residents and cleaning up decaying plantations near the watersheds, and conducting flood-preventing research for infrastructures near the watersheds. According to Eric A. Goldstein, a senior lawyer for the Natural Resources Defense Council: "This is no time to let down one’s guard". [32]