Meetings to organize the march began in early January at Rodwell's apartment in 350 Bleecker Street. [17] At first there was difficulty getting some of the major New York City organizations like Gay Activists Alliance (GAA) to send representatives. Craig Rodwell and his partner Fred Sargeant, Ellen Broidy, Michael Brown, Marty Nixon, and Foster Gunnison Jr. of Mattachine made up the core group of the CSLD Umbrella Committee (CSLDUC). For initial funding, Gunnison served as treasurer and sought donations from the national homophile organizations and sponsors, while Sargeant solicited donations via the Oscar Wilde Memorial Bookshop customer mailing list and Nixon worked to gain financial support from GLF in his position as treasurer for that organization. [18] [19] Other mainstays of the organizing committee were Judy Miller, Jack Waluska, Steve Gerrie and Brenda Howard of GLF. [20] Believing that more people would turn out for the march on a Sunday, and so as to mark the date of the start of the Stonewall uprising, the committee scheduled the date for the first march for Sunday, June 28, 1970. [21] With Dick Leitsch's replacement as president of Mattachine NY by Michael Kotis in April 1970, opposition to the march by Mattachine ended. [22] By 1973, the original Gay Liberation Front disbanded. [23]

Over the course of five decades, various groups have accused the NYC Pride March of losing its political, activist roots and becoming a venue for corporate pinkwashing, rainbow capitalism, and assimilation of queer identities. [38] Such critiques have given rise to various independent events conducted without permits or police. Since 1993 the NYC Dyke March has been held annually on the Saturday prior. [39] Since 1994 the New York City Drag March has been held annually on the Friday prior; it began as a protest against the ban on leather and drag during the 25th anniversary of Stonewall. [40] [41] Coinciding with the 50th anniversary of Stonewall in 2019, the Reclaim Pride Coalition organized the first Queer Liberation March, held on Sunday morning, hours before the NYC Pride parade. [42] [43]

The first march, in 1970, was front-page news in The New York Times reporting the march extended for about fifteen city blocks. [31] The march had thousands of participants with organizers "who said variously 3,000 and 5,000 and even 20,000." [31] The variance could be due, in part, that although the march started with over a dozen homosexual and feminist contingents, parade spectators were encouraged to join the procession. [31] Currently Heritage of Pride requires preregistration of marchers, and sets up barricades along the entire route discouraging the practice. [44] 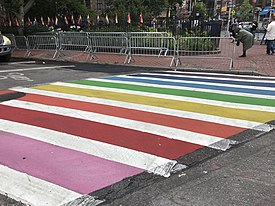 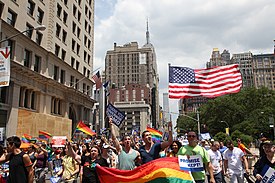 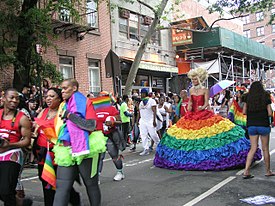