New York City Ballet (NYCB) is a ballet company founded in 1948 by choreographer George Balanchine [1] and Lincoln Kirstein. [2] Balanchine and Jerome Robbins are considered the founding choreographers of the company. Léon Barzin was the company's first music director. City Ballet grew out of earlier troupes: the Producing Company of the School of American Ballet, [3] 1934; the American Ballet, [4] 1935, and Ballet Caravan, 1936, which merged into American Ballet Caravan, [5] 1941; and directly from the Ballet Society, [6] [7] 1946. 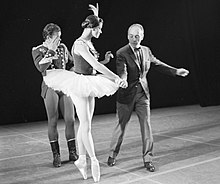 In a 1946 letter, Kirstein stated, "The only justification I have is to enable Balanchine to do exactly what he wants to do in the way he wants to do it." [8] He served as the company's General Director from 1946 to 1989, developing and sustaining it by his organizational and fundraising abilities. [8]

The company was named New York City Ballet in 1948 when it became resident at City Center of Music and Drama. [9] [10] Its success was marked by its move to the New York State Theater, now David H. Koch Theater, designed by Philip Johnson to Balanchine's specifications. City Ballet became the first ballet company in the United States to have two permanent venue engagements: one at Lincoln Center's David H. Koch Theater on 63rd Street in Manhattan, and another at the Saratoga Performing Arts Center, in Saratoga Springs, New York. The School of American Ballet (S.A.B.), which Balanchine founded, is the training school of the company.

After the company's move to the State Theater, Balanchine's creativity as a choreographer flourished. He created works that were the basis of the company's repertory until his death in 1983. He worked closely with choreographer Jerome Robbins, who resumed his connection with the company in 1969 after having produced works for Broadway.

NYCB still has the largest repertoire by far of any American ballet company. It often stages 60 ballets or more in its winter and spring seasons at Lincoln Center each year, and 20 or more in its summer season in Saratoga Springs. City Ballet has performed The Nutcracker, Romeo and Juliet, A Midsummer Night's Dream, and many more. City Ballet has trained and developed many great dancers since its formation. Many dancers with already developed reputations have also joined the ballet as principal dancers:

In 1960, Balanchine mounted City Ballet's Salute to Italy with premieres of Monumentum pro Gesualdo and Variations from Don Sebastian (called the Donizetti Variations since 1961), as well as performances of his La Sonnambula and Lew Christensen's Con Amore. The performance was repeated in 1968.

In 1972, Balanchine offered an eight-day tribute to the composer, his great collaborator, who had died the year before. His programs included twenty-two new works of his own dances, plus works by choreographers Todd Bolender, John Clifford, Lorca Massine, Jerome Robbins, Richard Tanner, and John Taras, as well as repertory ballets by Balanchine and Robbins. Balanchine created Symphony in Three Movements, Duo Concertant, and Violin Concerto for the occasion. He and Robbins co-choreographed and performed in Pulcinella. Balanchine had produced an earlier Stravinsky festival in 1937 as balletmaster of the American Ballet while engaged by the Metropolitan Opera. The composer conducted the April 27th premiere of Card Party.

In 1982, Balanchine organized a centennial celebration in honor of his long-time collaborator Igor Stravinsky, during which the City Ballet performed twenty-five ballets set to the composer's music. Balanchine made three new ballets, Tango, Élégie, and Persephone, and a new version of Variations. [14] The choreographer died the following year. Balanchine's 50th Anniversary Celebration was held by the company in 2002.

After Balanchine's death in 1983, Peter Martins was selected as balletmaster of the company. After 30 years, Martins was judged to have maintained the New York City Ballet's financial security and the musicality and performance level of the dancers, but he has not emphasized the Balanchine style to the extent that many observers expected he would. Martins retired from his position in 2018. [16]

A major component of the Spring 2008 season was a celebration of Jerome Robbins; major revivals were mounted of the following ballets:

On June 14, 2009, the second Dancers' Choice benefit was held at a special evening performance. The program included Sleeping Beauty and Union Jack. [18] [19] The program was supervised by principal dancer Jenifer Ringer. 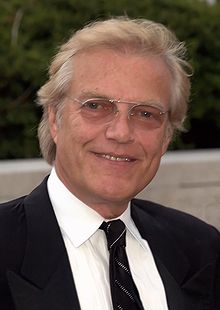 NYCB performs fall, winter and spring repertory seasons at the David H. Koch Theater at Lincoln Center as well as George Balanchine's Nutcracker during November and December; they have a summer residency at the Saratoga Performing Arts Center and regularly tour internationally.

Introductory talks about a current performance, called First Position Discussions, [20] are held before some performances or during some intervals in the fourth ring, house right; the docents are volunteers and include laymen as well as former dancers. Hour-long Inside NYCB events explore the history and inner workings of the company through performance and discussion, often with dancers and artistic staff. [21]

Other public programs include Family Saturdays, one-hour interactive programs for children 5 and up; [22] Children's Workshops and In Motion Workshops, pre-performance explorations of the music, movement, and themes of a ballet featured in the matinee performance for children ages 5–8 and 9–11, respectively; [23] [24] and Ballet Essentials, a 75-minute informal ballet class for adults ages 21 and up with little to no prior dance experience. [25] These programs are all facilitated by NYCB dancers.

$30 for 30 and Fourth Ring Society/Society NYCB

New York City Ballet offers tickets for $30 to select performances for patrons ages 13 to 30 at the box office, or online or by phone with an account; sales for each performance week (Tue. evening through Sun. matinee) begin at 10:00 a.m. on the Monday of that week. [26]

New York City Ballet's Fourth Ring Society offered discounted tickets to all shows in the theater's Fourth Ring for a small annual fee. This program was closed to new members in 2011 and renamed Society NYCB to reflect an expanded offering of discounted seats in all sections of the theater, although over time a few ballet programs (e.g., Nutcracker) and individual dates became unavailable. [27] [28]

City Ballet's Choreographic Institute was founded by Irene Diamond and Peter Martins in 2000. It has three main programmatic programs: choreographic sessions, providing choreographers with dancers and studio space; fellowship initiatives, annual awards in support of an emerging choreographer affiliated with a ballet company; and choreographic forums, symposia and round-table discussions on choreography, music, and design elements. [29]

The following is the current artistic staff (except dancers, who are listed at List of New York City Ballet dancers): [31]

The 66-member NYCB Orchestra is an important symphonic institution in its own right, having played for virtually all of the thousands of performances NYCB has given over the decades. It is one of the most versatile orchestras in the world, on any given week performing perhaps three or four times the repertoire that another symphony might be expected to do. [33] Principal players of the orchestra also perform the majority of the concertos, other solos, and chamber music in the NYCB repertory as well. The orchestra accompanies the ballet on all of its North American tours, and while the ballet uses local orchestras on its international tours, members of the NYCB Orchestra often go along as soloists or extras.

Besides the members of the orchestra, the NYCB has six pianists on full-time staff. [34] They all perform in the pit with the orchestra on a regular basis.

The NYCB Orchestra also occasionally accompanies dance companies from other cities at the Koch Theater. These have included the Australian Ballet in the Spring 2012, [35] and the San Francisco Ballet [36] in the Fall 2013.

In January 2019, it was announced that an anonymous donor had funded the renaming of the orchestra pit as the "Stravinsky Orchestra Pit" .

Other conductors of note

In December 2017, Martins took a leave of absence from the New York City Ballet following an allegation of sexual misconduct made against him. [38] [39] [40] Five City Ballet dancers later told the New York Times that Martins had verbally or physical abused them; Martins denied engaging in any misconduct. [41] [42] Martins retired from the City Ballet on January 1, 2018. [42] An independent inquiry commissioned by NYCB and SAB and led by employment-law attorney Barbara E. Hoey did not corroborate the allegations of harassment or violence made against Martins, according to a joint statement issued by the company and school. The report itself was not made public. [43] [44] [45] [46]

All defendants disputed key factual allegations made in the complaint as well as their liability as a matter of law; they all filed motions to dismiss. [48] The case is currently pending disposition.