From Wikipedia, the free encyclopedia
This article is a special ward of Tokyo. For the city of Nagano Prefecture. See Nakano, Nagano.
Special ward in Kantō, Japan 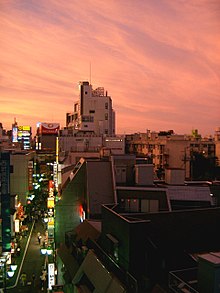 Sunset over Nakano, with Nakano Broadway in the distance

One of the oldest temples in Nakano: Jougan-ji

Nakano (中野区, Nakano-ku) is a special ward in Tokyo, Japan. The English translation of its Japanese self-designation is Nakano City. [2]

The ward was founded on October 1, 1932, when the towns of Nogata and Nakano were absorbed into the former Tokyo City as Nakano Ward. The present administration dates from March 15, 1947, when the Allied occupation reformed the administration of Tokyo-to.

Rivers include the Kanda, Myosho-ji and Zenpuku-ji Rivers, and the Aratama Waterway.

Municipal kindergartens, elementary schools, and junior high schools are operated by the Nakano City Board of Education.

A complicated bus network is constructed throughout Nakano Ward because most train lines only run east and west. 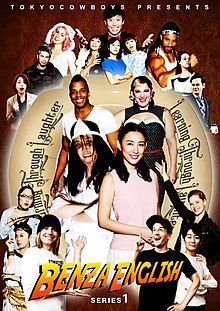 The Benza is a 2019 Amazon Prime Video series about two foreigners ( Christopher McCombs and Kyle Card) who are trying to fix their broken toilet seat (便座, benza) and are suddenly tasked with saving the world. The series takes place entirely in Higashi Nakano. Benza English is a 2020 spin-off series that also takes place in Higashi Nakano. The Benza RPG is a 2020 video game adaption available on iOS, Android, and Steam. [5]

Wikivoyage has a travel guide for Tokyo/Nakano.
Retrieved from " https://en.wikipedia.org/?title=Nakano,_Tokyo&oldid=1123842587"
Categories:
Hidden categories: