Musashino (武蔵野市, Musashino-shi) is a city located in the western portion of Tokyo Metropolis, Japan. As of 1 March 2021 [update], the city had an estimated population of 147,492 in 77,779 households, and a population density of 13,000 persons per km². The total area of the city is 10.98 square kilometres (4.24 sq mi). [1] Based on the 2015 Kanto Ranking, Musashino was the fifth most desirable place to live in Central Japan.[ citation needed] 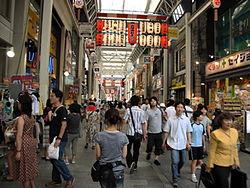 Musashino is located in the Musashino Terrace of central Tokyo Metropolis. It is bordered by the 23 Special Wards of Tokyo. [2] [3]

Kichijōji includes the source of the Kanda River. [5]

Musashino has a Humid subtropical climate (Köppen Cfa) characterized by warm summers and cool winters with light to no snowfall. The average annual temperature in Musashino is 14.5 °C. The average annual rainfall is 1647 mm with September as the wettest month. The temperatures are highest on average in August, at around 26.0 °C, and lowest in January, at around 3.1 °C. [6]

Per Japanese census data, [7] the population of Musashino increased rapidly in the 1950s and 1960s, but has remained relatively constant for the past 40 years.

The area of present-day Musashino was part of ancient Musashi Province. [8] In the post- Meiji Restoration cadastral reform of July 22, 1878, the area became part of Kitatama District in Kanagawa Prefecture. The village of Musashino was created on April 1, 1889 with the establishment of modern municipalities law. Kitatama District was transferred to the administrative control of Tokyo Metropolis on April 1, 1893. [9] Musashino was elevated to town status in 1928. Nakajima Aircraft Company had an aircraft engine plant in Musashino, which became a target for American bombers in World War II. [10] Musashino was elevated to city status on November 3, 1947. [11]

Musashino has a mayor-council form of government with a directly elected mayor and a unicameral city council of 26 members. Musashino contributes one member to the Tokyo Metropolitan Assembly. In terms of national politics, the city is part of Tokyo 18th district of the lower house of the Diet of Japan.

Musashino is largely a commuter town for central Tokyo.

The anime and manga company Coamix has its headquarters in the Kichijōji neighborhood of Musashino. [12] At one time Studio Ghibli was located in Kichijōji. [13] Several other animation studios are located in Musashino, including J.C.Staff, [14] Artland, Studio Ponoc, Production I.G, Bee Train, and Tatsunoko Production.

The electrical engineering and software company Yokogawa Electric has its headquarters in Nakacho, Musashino. Tokyo Musashino City FC, a football (soccer) club, is also located there. 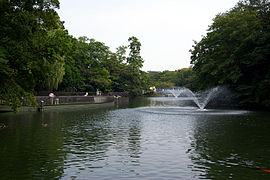