Mount Sinai is ranked #11 among American medical schools by the 2023 U.S. News & World Report. [4] In 2021, it was ranked 15th [5] in the country for biomedical research and leads the country in research funding from the National Institutes of Health for neuroscience (#2) and genetics (#2). [6] It attracted over $400 million in total NIH funding in 2021. [5] Mount Sinai's faculty includes 23 elected members of the National Academies of Sciences, Engineering, and Medicine [7] and 40 members of the American Society for Clinical Investigation. [8]

In 2018, the MD program matriculated 140 students from 6,156 applicants. [9] The median undergraduate GPA of matriculants is 3.84, and the median Medical College Admission Test score is in the 95th percentile. [5] The Medical Scientist Training Program is currently training over 90 MD/PhD students. As one of the most selective medical schools in the U.S., Mount Sinai received 8,276 applications for approximately 140 MD and MD/PhD positions for the 2021–2022 academic year. [5]

The first official proposal to establish of a medical school at Mount Sinai was made to the hospital's trustees in January 1958. The school's philosophy was defined by Hans Popper, Horace Hodes, Alexander Gutman, Paul Klemperer, George Baehr, Gustave L. Levy, and Alfred Stern, among others. [10] Milton Steinbach was the school's first president. [11]

Classes at Mount Sinai School of Medicine began in 1968, and the school soon became known as one of the leading medical schools in the U.S., as the hospital gained recognition for its laboratories, advances in patient care and the discovery of diseases. [12] The City University of New York granted Mount Sinai's degrees. [10] The buildings at ISMMS were designed by notable architect I. M. Pei.[ citation needed]

In 2007, Mount Sinai Medical Center's boards of trustees approved the termination of the academic affiliation between Mount Sinai and NYU. [15] In 2010, Mount Sinai was accredited by the Middle States Commission on Higher Education and became an independent degree-granting institution. [16]

In March 2020, Elmhurst Hospital Center, the public hospital that serves as a major training site for Mount Sinai students and residents, was the epicenter of New York City's initial COVID-19 surge, with Mount Sinai house staff and faculty serving as the city's first frontline workers treating patients infected with coronavirus. [20] Mount Sinai has since established itself at the forefront of research to understand and treat COVID-19, being named a lead site in a $470 million study to examine the long-term effects of COVID-19. [21]

In April 2019, the Icahn School was named in a lawsuit filed against Mount Sinai Health System and several employees of the Icahn School's Arnhold Institute for Global Health. [22] The suit was filed by eight current and former employees for "age and sex discrimination as well as improper reporting to funding agencies, misallocation of funds, failing to obtain Institutional Review Board approval prior to conducting research in violation of Mount Sinai and federal guidelines, and failing properly to adhere to the guidelines of the Health Insurance Portability and Accountability Act or HIPAA." [23] The school denies the claims. More than 150 students at the Icahn School and more than 400 Icahn and Mount Sinai Health System faculty have signed letters, addressed to the Board of Trustees, calling on the system to investigate these allegations. [24] [25] 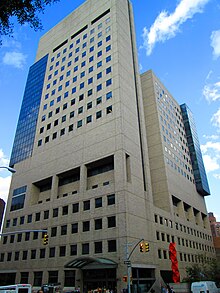 Icahn Medical Institute at ISMMS, built in 1997 and designed by Davis Brody Bond.

Mount Sinai's medical curriculum is based on the standard program of medical education in the United States: the first two years of study are confined to the medical sciences, the latter to the study of clinical sciences. The first and second years are strictly pass/fail; the third and fourth years feature clinical rotations at Mount Sinai Hospital (Manhattan) and Elmhurst Hospital Center, [26] a major level 1 trauma center and safety-net hospital known for being situated in the "most ethnically diverse community in the world," serving an area of one million people with recent immigrants encompassing 112 different countries. [27] Other clerkship and residency training sites include the New York Eye and Ear Infirmary, Mount Sinai Hospital of Queens, James J. Peters VA Medical Center in the Bronx, Mount Sinai West, Mount Sinai Morningside, and Mount Sinai Kravis Children's Hospital. [28]

Mount Sinai's four-pronged missions (quality education, patient care, research, and community service) follow the "commitment of serving science," and the majority of students take part in some aspect of community service. This participation includes The East Harlem Health Outreach Partnership, which was developed by the students of Mount Sinai to create a health partnership with the East Harlem community, providing quality health care, regardless of ability to pay, to uninsured residents of East Harlem.

Since 1989, Mount Sinai has featured a unique early-admissions program, The Humanities and Medicine Program, which guaranteed students admitted to the program a place in the medical school. [29] These students, known colloquially as "HuMeds," applied during the fall of their sophomore year in college or university and did not take the Medical College Admission Test (MCAT). HuMeds made up about 25% of each year's ISMMS medical class. [30] In 2013, the Humanities and Medicine program was expanded into the FlexMed program. Students admitted to the ISMMS via FlexMed can pursue any major and are required to take additional coursework in ethics, statistics, and health policy in lieu of or in addition to several of the traditional pre-med requirements. The school plans to recruit half of each incoming class through the FlexMed program. [31]

Individual educational programs are accredited through the appropriate bodies, including but not limited to LCME, CEPH, ACCME and ACGME.

The Annals of Global Health [32] was founded at Mount Sinai in 1934, then known as the Mount Sinai Journal of Medicine. Levy Library Press publishes The Journal of Scientific Innovation in Medicine. [33]