Moorhead ( /ˈmɔːrhɛd/) is a city in and county seat of Clay County, Minnesota, United States, [5] on the banks of the Red River of the North. Located in the Red River Valley, an extremely fertile and active agricultural region, Moorhead is also home to several corporations and manufacturing industries. [6] Across the river from Fargo, North Dakota, Moorhead helps form the core of the Fargo–Moorhead ND-MN Metropolitan Area. The population was 44,505 according to the 2020 census. [2]

Platted in 1871, the city was named for William Galloway Moorhead, an official of the Northern Pacific Railway. [7]

The city was platted in 1871 and named for William Galloway Moorhead, a Northern Pacific Railway official and brother-in-law of financier Jay Cooke. [7] [8]

The former Moorhead Armory on 5th Street South was the site of the intended concert destination for musicians Buddy Holly, Ritchie Valens, and The Big Bopper before their fatal plane crash a few miles north of Clear Lake, Iowa around 1.00 am Tuesday February 3, 1959. The building was demolished in 1990 and is now the site of Ecumen Evergreens, a senior living property.

Moorhead is home to the first Dairy Queen to sell Dilly Bars. [9] [10] The Moorhead Dairy Queen is also one of only a few Dairy Queens operating on a contract signed in 1949, [11] which allows it to feature products not approved by corporate Headquarters. An example includes a chipper sandwich, vanilla ice cream sandwiched between two chocolate chip cookies and dipped in chocolate.

Moorhead is located adjacent to the Red River in the Red River Valley. The land around the Fargo–Moorhead area is some of the flattest and richest (for agricultural uses) in the world. This is because it lies on the lake bed of glacial Lake Agassiz, which drained between 9,900 and 11,000 years ago. [12]

According to the 2010–2012 American Community Survey, the racial composition was as follows:

According to the 2006–2008 American Community Survey, the top ten European ancestries were the following:

There were 14,304 households, of which 29.4% had children under the age of 18 living with them, 43.5% were married couples living together, 10.6% had a female householder with no husband present, 4.4% had a male householder with no wife present, and 41.5% were non-families. 29.2% of all households were made up of individuals, and 10% had someone living alone who was 65 years of age or older. The average household size was 2.41 and the average family size was 2.97.

Moorhead has multiple transportation options available to residents with intercity buses, trains and air travel available in Fargo. Locally, the city is served with public transit by MATBUS. Interstate 94 and U.S. Highways 10, 52 ( concurrent with I-94), and 75 are four of the main roadways in the city. Other nearby routes in the Fargo–Moorhead area include Interstate 29 and Minnesota State Highway 336.

According to the City's 2019 Comprehensive Annual Financial Report, [16] the largest employers in the city are:

The city is also home to the Bluestem Center for the Arts, a 3,000 seat outdoor amphitheater that opened in 2009 with a partnership between the Fargo Public Schools, the City of Moorhead, and an arts grant from the state of Minnesota. [17] Bluestem hosts a summer concert series which has drawn many famous bands including Wilco, Goo Goo Dolls, The Beach Boys, and Weezer. [18]

The Bluestem Center for the Arts is home to Trollwood Performing Arts School, a renowned summer arts and theater program for students of all ages. [19]

The Comstock House is a historic house museum, a blend of Queen Anne and Eastlake styles built in 1883. Solomon Comstock was a lawyer and U.S. House Representative. [20] 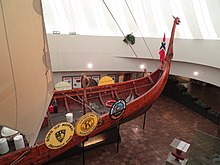 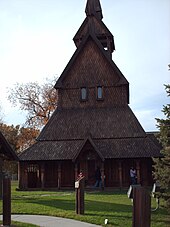 Replica of Norwegian stave church at the Hjemkomst Center

The Hjemkomst Center is a local museum containing a full-scale replica of a Viking ship of the same name. The Hjemkomst vessel was built in nearby Hawley by Moorhead resident Robert Asp, and was sailed from Duluth to Oslo, Norway in 1982 by his children following Asp's death. The ship is now permanently housed in the center.

The Clay County Museum and Archives, operated by the Clay County Historical Society, interprets the history of Clay County in a free museum in the lower level of the Hjemkomst Center. The Society has more than 30,000 artifacts in their collection, one of the largest and most important historic collections in Minnesota outside of the Minneapolis-St. Paul area.

Located on the grounds of the Hjemkomst Center is a Stave Church. The traditional Norwegian-style church serves as a symbol of the Norwegian heritage in the Red River Valley. The church is a full-scale replica of the Hopperstad stave church in Vik, Norway.

The Fargo-Moorhead RedHawks is an independent professional baseball team that plays at Newman Outdoor Field in Fargo. They are part of the American Association.

Being a cold weather city, hockey has emerged as a favorite sport of Moorhead. The community has provided significant support to hockey programs such as Moorhead Youth Hockey. Over the years, Moorhead Senior High has produced a number of talented hockey players, including:

Olympic pairs figure skater Mark Ladwig also hails from Moorhead. With partner Amanda Evora, he was a two-time U.S. national silver medalist and competed in the 2010 Winter Olympics. With Lindsay Davis, he was part of the 2012–2013 U.S. Figure Skating Reserve Team. [21] 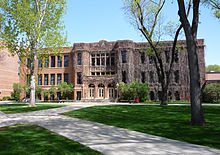 Weld Hall on the campus of Minnesota State University Moorhead

Old Main on the campus of Concordia College

K-12 education is provided to over 5,000 students by the Moorhead School District: S.G. Reinertsen Elementary, Robert Asp Elementary, Ellen Hopkins Elementary, Dorothy Dodds Elementary, Horizon Middle School and Moorhead High School. The district is known for its high student achievement with students consistently performing above the national average on the ACT. [22] The district includes the cities of Moorhead, Georgetown, Kragnes, and Sabin.

The city includes the Red River Area Learning Center and the Probstfield Center for Education.

Park Christian School is a private Christian school in Moorhead providing a K–12 education as well as St. Joseph's, a Catholic elementary school.

The Moorhead Public Library (1906) at 102 6th Street South was paid for by Andrew Carnegie and designed by architect Milton Earl Beebe. [23]

Moorhead is briefly referenced in the 1998 Coen brothers' film The Big Lebowski as the hometown of one of the main characters, Bunny Lebowski, played by Tara Reid. The high school photo of Bunny shown in the movie even has her wearing the correct orange, black, and white school colors of the Moorhead Spuds.

Moorhead is also mentioned in the 1978 film The Buddy Holly Story as the next stop in the ill-fated Winter Dance Party tour. Buddy Holly, Ritchie Valens and The Big Bopper died in a plane crash en route to their scheduled performance at the Moorhead Armory Building from Clear Lake, Iowa on February 3, 1959.

Moorhead's pioneer Prairie Home Cemetery on 8th Street was the inspiration for the name of Garrison Keillor's national radio program, A Prairie Home Companion. [35] Although Keillor thought the cemetery was founded by Norwegian Lutherans, in fact it was organized in 1875 by the Rev. Oscar Elmer, a Yankee Presbyterian minister who was the first ordained Christian minister in the Moorhead/Fargo area. [36]

In the movie The Straight Story, Alvin Straight ( Richard Farnsworth) mentions that he and his brother, Lyle Straight, were born and raised in Moorhead.