From Wikipedia, the free encyclopedia
Shopping mall in Nevada, U.S.

Synonymous with retail districts throughout the country, the name connotes a shopping environment and also alludes to the " Miracle Mile" district, as the casino renovates its image to a Los Angeles themed resort.[ citation needed] 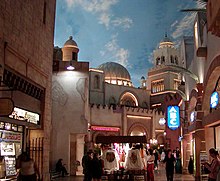 The $300 million mall, located in the center of the Las Vegas Strip, opened on August 17, 2000 as Desert Passage mall inside the reconstructed Aladdin hotel. It was built and operated by Trizec Properties and originally featured a Moroccan theme. The shopping complex featured an hourly indoor thunderstorm.[ citation needed]

The mall was sold in 2003 to Boulevard Invest LLC, owned by Investcorp, RFR Holding LLC and Tristar Capital.

To match the conversion of the Aladdin to a Planet Hollywood Las Vegas, the Desert Passage was renovated and adopted a new Los Angeles theme. It was renamed Miracle Mile Shops in 2007. [2]

In 2016, Boulevard Invest sold the mall for about $1.1 billion to a partnership of Miller Capital Advisory and CalPERS. [3]

The mall is home to live entertainment inside the Saxe Theater and V Theater. A dozen shows daily include the popular V-The Ultimate Variety Show and Vegas! The Show.