From Wikipedia, the free encyclopedia
Private, day, college-prep school in the United States

Mid-Pacific Institute is a private, co-educational college preparatory school for grades preschool through twelve with an approximate enrollment of 1,538 students, [1] the majority of whom are from Hawaii (although many also come from other states and other countries, such as Japan, Korea, China, Canada, Australia, Marshall Islands and countries in Europe and Africa). The school offers programs of study in the International Baccalaureate Diploma Programme and the Mid-Pacific School of the Arts (MPSA). Mid-Pacific Institute is located on 38 acres (150,000 m2) in Manoa, near the University of Hawaii, close to downtown Honolulu.

The high school was established through the 1908 merger of Kawaiahaʻo Seminary for Girls, founded in 1864, and Mills Institute for Boys, founded in 1892. Both schools were founded by missionaries, with the goal of teaching English to native Hawaiians, Japanese, Chinese and other nationalities. It was established that the school must remain Christian so long as the original land was in use. However, students are allowed to practice any religion of their choice. Even members of the Hawaiian royal family attended the schools. [2] By opening its doors to students with no prejudice over race and class status, Mid-Pacific was a part of a growing movement toward greater social acceptance that was rarely seen in the repressive oligarchical control within the Territory of Hawaii. [3]

"At Mid-Pacific, an attempt was made to bring students of all races together in a boarding school and to encourage democracy in education. Because it was subsidized by members of the Damon, Wilcox, and Atherton families- all missionary descendants-the fees were relatively low, and many ambitious Chinese and Japanese youngsters enrolled." 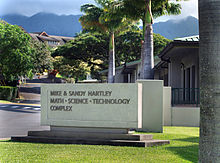 A merger of the two schools was suggested in 1905 and the Hawaiian Board of Foreign Missions purchased 35 acres of land in Manoa valley. A ceremony was held on May 31, 1906 for the new school campus, which officially opened in 1908. The two schools continued to operate independently while co-existing in the new campus until the coeducation plan went into effect in the fall of 1922 and by June 1923 Mid-Pacific Institute became the common shared name. [2]

Mid-Pacific School of the Arts (MPSA)

The Mid-Pacific School of the Arts offers a preprofessional certificate program in dance, instrumental music, drama, and fine arts. The MPSA is the only certified program of its kind in the state of Hawaii. Students who complete their studies often move on to professional conservatories and other schools of performing and fine arts. MPI is unique in requiring all of its students to take a number of arts electives.

The Mid-Pacific School of the Arts, which was formally established in 1991, is a member of the International Network of Performing and Visual Arts Schools and was among the first six schools in the nation to be recognized by the organization as a Network Star School. It also received the Arts Excellence Award from the Hawaii Alliance for Arts Education. [8]

The International Baccalaureate Diploma Programme is a widely recognized and highly regarded two-year pre-university educational program that emphasizes rigorous, internationally-based curriculum standards and promotes awareness and appreciation of global issues and perspectives. [9] Students must take six subjects, and must also pass 3 extra requirements, for example, Theory of Knowledge (ToK), a 4000-word Extended Essay (EE), and a requirement of at least a total of 150 hours in CAS (Creativity, Action, Service). Mid-Pacific Institute was the first secondary school in the state of Hawaii to offer the International Baccalaureate Diploma Programme. The IB is administered by the International Baccalaureate Organization, which was founded in the 1968 in Geneva, Switzerland.

The school's athletic affiliation is with the Interscholastic League of Honolulu. Mid-Pacific participates in intermediate, junior varsity and varsity level soccer, cross country, track & field, golf, softball, baseball, basketball, canoe paddling, tennis, bowling, volleyball, swimming and kayaking. Mid-Pacific Institute is one of nineteen smaller private schools that made up a larger unified team called Pac-5 Wolfpack, which allows the students to participate in certain high school athletic competition. Pac-Five began in 1973 to allow smaller institutions (of 1000 or fewer students per school) to form a football team and compete at a varsity level with bigger schools. [10] Now, Pac-5 competes in football, wrestling, judo and water polo. Mid-Pacific announced that they would be leaving its affiliation with Pac-5 in 2023. [11]