From Wikipedia, the free encyclopedia
Administrative unit of a dense urban core and its satellite cities
"Metro area" redirects here. For the dance music duo, see Metro Area.
Compare a metropolis and a conurbation. 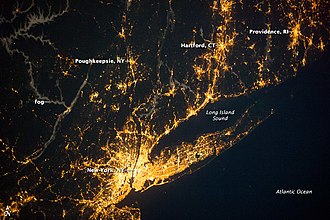 Satellite imagery showing the New York metropolitan area at night. Long Island extends to the east of the central core of Manhattan. 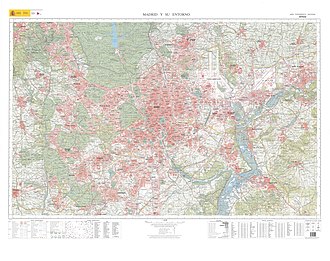 A metropolitan area or metro is a region that consists of a densely populated urban agglomeration and its surrounding territories sharing industries, commercial areas, transport network, infrastructures and housing. [1] [2] A metro area usually comprises multiple principal cities, jurisdictions and municipalities: neighborhoods, townships, boroughs, cities, towns, exurbs, suburbs, counties, districts, as well as even states and nations like the eurodistricts. As social, economic and political institutions have changed, metropolitan areas have become key economic and political regions. [3]

In the United States, the concept of metropolitan statistical areas has gained prominence. The area of the Greater Washington metropolitan area is an example of statistically grouping independent cities and county areas from various states to form a larger city because of proximity, history and recent urban convergence. Metropolitan areas may themselves be part of a greater megalopolis. For urban centres located outside metropolitan areas that generate a similar attraction at smaller scale for a region, the concept of a regiopolis and respectively regiopolitan area or regio was introduced by German professors in 2006. [6] In the United States, the term micropolitan statistical area is used.

A metropolitan area combines an urban agglomeration (the contiguous, built-up area) with zones not necessarily urban in character, but closely bound to the center by employment or other commerce. These outlying zones are sometimes known as a commuter belt, and may extend well beyond the urban zone, to other political entities. For example, Islip, New York on Long Island is considered part of the New York metropolitan area.

In practice, the parameters of metropolitan areas, in both official and unofficial usage, are not consistent. Sometimes they are little different from an urban area, and in other cases they cover broad regions that have little relation to a single urban settlement; comparative statistics for metropolitan area should take this into account. The term "Metropolitan" can also refer to a county-level municipal government structure, with some shared services between a central city and its suburbs, which may or may not include the entirety of a metropolitan area. Population figures given for one metro area can vary by millions.

There has been no significant change in the basic concept of metropolitan areas since its adoption in 1950, [7] although significant changes in geographic distributions have occurred since then, and more are expected. [8] Because of the fluidity of the term "metropolitan statistical area," the term used colloquially is more often "metro service area," "metro area," or "MSA" taken to include not only a city, but also surrounding suburban, exurban and sometimes rural areas, all which it is presumed to influence. A polycentric metropolitan area contains multiple urban agglomerations not connected by continuous development. In defining a metropolitan area, it is sufficient that a city or cities form a nucleus with which other areas have a high degree of integration.

A metropolitan area is commonly known and characterised by a high concentration in service sector jobs and businesses. [9]

Melbourne, Victoria, Australia at night from the International Space Station

The Australian Bureau of Statistics uses Greater Capital City Statistical Areas (GCCSAs), which are geographical areas designed to represent the functional extent of each of the eight State and Territory capital cities. They were designed to reflect labour markets, using the 2011 Census "travel to work" data. Labour markets are sometimes used as proxy measures of the functional extent of a city as it contains the majority of the commuting population. GCCSAs replaced "Statistical Divisions" used until 2011. [10] [a]

Other Metropolitan areas in Australia include cross border cities or continuous built-up areas between two or more cities that are connected by an extensive public transport network that allows for commuting for work or services. The following are such conurbations[ citation needed]-

Greater São Paulo at night seen from the International Space Station
The following paragraph is an excerpt from List of metropolitan areas in Brazil § Definitions.
In Brazil, the terms metropolitan area ( Portuguese: região metropolitana) and urban agglomeration (aglomeração urbana) have specific meanings. They are defined by federal and state legislation as collections of municipalities focused on "integrating the organization, planning and execution of public functions of common interest". [12] An integrated development area (região integrada de desenvolvimento) is one of the two above structures that crosses state (or Federal District) boundaries.

The IBGE defines also "Immediate Geographic Areas" (formerly termed microregions) which capture the region "surrounding urban centers for the supply of immediate needs of the population". [13] Intended for policy planning purposes, as of March 2021 census data is not tabulated on the level of these Areas, but instead at the municipality or state level. [14]

Statistics Canada defines a census metropolitan area (CMA) as an area consisting of one or more adjacent municipalities situated around a major urban core. To form a CMA, the metropolitan area must have a population of at least 100,000, at least half within the urban core. To be included in the CMA, adjacent municipalities must have a high degree of integration with the core, as measured by commuter flows derived from census data. [15]

In Chinese, there used to be no clear distinction between " megalopolis" (城市群, lit. city cluster) and "metropolitan area" (都市圈) until National Development and Reform Commission issued Guidelines on the Cultivation and Development of Modern Metropolitan Areas (关于培育发展现代化都市圈的指导意见) on Feb 19, 2019, in which a metropolitan area was defined as "an urbanized spatial form in a megalopolis dominated by (a) supercity(-ies) or megacity(-ies), or a large metropolis playing a leading part, and within the basic range of 1-hour commute area." [16]

The European Union's statistical agency, Eurostat, has created a concept named " larger urban zone" (LUZ). The LUZ represents an attempt at a harmonised definition of the metropolitan area, and the goal was to have an area from which a significant share of the residents commute into the city, a concept known as the "functional urban region". [17]

France's national statistics office, INSEE, names an urban core and its surrounding area of commuter influence an aire d'attraction d'une ville [ fr] (or AAV, literally meaning "catchment area of a city"), plural: aires d'attraction des villes. [18] The official translation of this statistical area in English (as used by INSEE) is "functional area". [19] The AAV follows the same definition as the Functional Urban Area (FUA) used by Eurostat and the OECD, and the AAVs are thus strictly comparable to the FUAs. [19]

The AAV replaced in 2020 the metropolitan statistical area called aire urbaine (AU). [18] The AU, which was defined differently than the AAV, has now been discarded by INSEE and replaced with the AAV in order to facilitate international comparisons. [19]

In German definition, metropolitan areas are eleven most densely populated areas in the Federal Republic of Germany. They comprise the major German cities and their surrounding catchment areas and form the political, commercial and cultural centres of the country.

For urban centres outside metropolitan areas, that generate a similar attraction at smaller scale for their region, the concept of the Regiopolis and respectively regiopolitan area or regio was introduced by German professors in 2006.

In India, a metropolitan city is defined as one with a population more than 4 million. [20]

In 2001, Italy transformed 14 provinces of some of the country's largest cities into Metropolitan Cities. Therefore, the territory of the Metropolitan City corresponds to that of a normal Italian province.

In Japan, a metropolitan area (都市圏) is a division set separately from administrative areas in order to define wide urban areas used in the Census conducted by the Statistics Bureau of the Ministry of Internal Affairs and Communications.

The Greater Tokyo Area is the most populous metropolitan area in the world.

If the central cities are next to each other, the areas are integrated into one large area.

Metropolitan areas are known as zonas metropolitanas in Mexico. The National Population Council (CONAPO) defines them as: [22]

Pakistan has nine metropolitan areas with populations greater than a million. Seven of these are entirely in Punjab including Lahore, Faisalabad, Gujranwala, Multan, Bahawalpur, Sargodha, and Sialkot; one ( Islamabad-Rawalpindi is split between Punjab and the Islamabad Capital Territory; two are located in Sindh, including Karachi, the largest metropolitan area in the country, and Hyderabad; one in Khyber Pakhtunkhwa: Peshawar; and the final in Balochistan: Quetta.

Main article: List of metropolitan areas in the Philippines

The Philippines currently has three metropolitan areas defined by the National Economic and Development Authority (NEDA). These metropolitan areas are separated into three main geographical areas; Metro Manila (which is located in Luzon), Metro Cebu (which is located in Visayas), and Metro Davao (which is located in Mindanao). The official definition of each area does not necessarily follow the actual extent of continuous urbanization. For example, the built-up area of Metro Manila has long spilled out of its officially defined borders into the adjacent provinces of Bulacan, Rizal, Laguna, and Cavite. The number of metropolitan areas in the Philippines was reduced from 13 in 2007 to the current three based from the 2017–2022 Philippine Development Plan by NEDA. The other 10 metropolitan areas were Metro Angeles, Metro Bacolod, Metro Baguio, Metro Batangas, Metro Cagayan de Oro, Metro Dagupan, Metro Iloilo–Guimaras, Metro Butuan, Metro Naga, and Metro Olongapo.

The word metropolitan describes a major city in Turkey like Istanbul, a city that is dominant to others both financially and socially. [24] There are 30 officially defined "state metropolitan areas" in Turkey, for governing purposes. [25]

The European Union's ESPON group has compiled a separate list of metropolitan areas which covers the UK.

The Office of Management and Budget defines a Metropolitan Statistical Area as one or more adjacent counties or county equivalents that have at least one urban area of at least 50,000 population, plus adjacent territory that has a high degree of economic and social integration with the core as measured by commuting ties. The OMB then defines a Combined Statistical Area as consisting of various combinations of adjacent metropolitan and micropolitan statistical areas with economic ties measured by commuting patterns. The Office of Management and Budget further defines a core-based statistical area (CBSA) to be a geographical area that consists of one or more counties (or equivalents) anchored by an urban center of at least 10,000 people plus adjacent counties that are socioeconomically tied to the urban center by commuting.