From Wikipedia, the free encyclopedia
1984 concert tour by Judas Priest

The Metal Conqueror Tour was a concert tour by English heavy metal band Judas Priest in support of the album Defenders of the Faith. It ran from 20 January until 13 September 1984.

Following the tour, the band took a one-year hiatus from touring, apart from a brief performance at the 1985 Live Aid concert in Philadelphia. 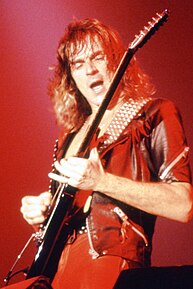 The 2015 release of Defenders of the Faith's 30th anniversary edition features the concert from 5 May 1984 in Long Beach Arena, Long Beach, California in its entirety. Prior to this release, select tracks from the same concert were featured as bonus tracks on the 2001 remasters of Sin After Sin, British Steel, Defenders of the Faith, Priest...Live! and Ram It Down.

The stage production featured a large drum riser prop in the shape of the Metallian that adorns the Defenders of the Faith album cover. During the concert, the band members would enter the stage through the prop's mouth or under either of its raisable legs. Halford's staple live stunt of riding a motorcycle on stage had him emerge from under the one of the legs.

A special pre- Defenders of the Faith mini tour took place in the United Kingdom and Germany, which went from 12 to 22 December 1983 with support act Quiet Riot. They would also perform at the Rock Pop Festival at Westfalenhallen in Dortmund on 18 December with Iron Maiden, Scorpions, Ozzy Osbourne, Def Leppard and Quiet Riot. [1]

The setlist varied throughout the tour. The European setlist consisted of:

The U.S. setlist consisted of:

" Heading Out to the Highway" was also played on 9 June.

The band toured with Ted Nugent and Raven on the European leg and Great White and Kick Axe on the North American leg. [2]

On 18 June 1984, at Madison Square Garden in New York City, several riots broke out, and the crowd also brawled with venue security and arriving NYPD officers - some in full riot gear - which prompted the venue to ban Priest. [3]

"Madison Square Garden banned us for life", recalled Glenn Tipton. "The audience went berserk and ripped all the seats out. They cost more than a quarter of a million dollars to replace. Me and Ken [KK Downing] went back there to see a tennis match which John McEnroe was playing in. We went incognito, wearing hoodies so no one would recognize us, but the ushers came up to us and said, 'Thanks for the new seats, guys.'" [4]