Mercy College (Mercy or Mercy NY) is a private university with its main campus in Dobbs Ferry, New York and additional locations in Manhattan, the Bronx, and Yorktown Heights. [8] The university is historically affiliated with the Catholic church. Mercy College has five schools: Business, Education, Health & Natural Sciences, Liberal Arts and Social & Behavioral Sciences, and offers more than 90 undergraduate and graduate degree and certificate programs. [9] The university had 11,295 students enrolled in fall 2015. The student body comes from 43 states and 54 countries. [5] 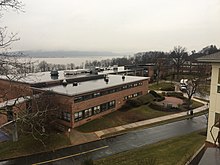 Founded by the Sisters of Mercy in 1950, Mercy College became a four-year college offering programs leading to the baccalaureate degree in 1961. The college was accredited by the Middle States Commission on Higher Education in 1968. In the next half-decade, Mercy College set a course for its future with a series of actions including declaring itself independent and co-educational. In addition, it doubled the size of the existing physical plant and initiated the first of many community outreach efforts. Mercy College in the 1970s broadened its outreach through the establishment of extension centers and branch campuses throughout communities in Westchester County and New York City.

In January 2017, founding dean of the College of Arts and Sciences and associate vice president for academic affairs at Western New Mexico University, as well as a former program director at the National Science Foundation (NSF), Dr. José Herrera, was appointed the new provost and vice president of academic affairs of Mercy College. [12] [13]

In March 2019, the agreement between the College of New Rochelle and Mercy College was finalized. [15]

On August 12, 2019, it was announced that William Latimer, the 14th and final College of New Rochelle president, will join Mercy College as vice president of its New Rochelle and Bronx locations. 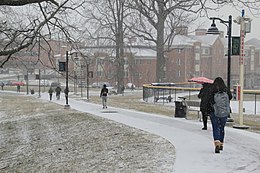 The main campus is in Dobbs Ferry, New York, overlooking the Hudson River. The campus encompasses 66 acres alongside the Hudson River in Dobbs Ferry, New York, a suburb of Westchester County, 25 miles (40 km) north of New York City. In addition to academic and administrative buildings, it houses the college's residence and athletics buildings. In 2011, Mercy College bought the Our Lady of Victory Academy building after the school closed. [16] Dobbs Ferry students enjoy all the nearby shopping and restaurants, just steps from campus, as well as biking, jogging, or walking along the Old Croton Aqueduct Trail that runs through campus. The Dobbs Ferry main campus is just a short walk from the Ardsley-on-Hudson Station of the Metro-North Hudson Line, making Grand Central Terminal in New York City accessible in less than 30 minutes. [17] In December 2015, the college opened a new 350-bed, state-of-the-art residence hall complex that includes a 5,000-square-foot fitness center facility and student commons with shops. [18]

Mercy College hosted the Third Round and Quarterfinals of the 2017 NCAA Division II Women's Soccer Championships at Mercy Field on the Dobbs Ferry main campus. [19]

The Manhattan site is situated in the heart of Manhattan at Herald Square and occupies two floors at 66 W 35th St.

In 1979, the Yorktown site of Mercy College was moved to its permanent facility at the intersection of Route 202 and Strang Boulevard. This beautifully landscaped building was renovated for college use. The branch library of Mercy College on Mercy College's Yorktown site has been designated a federal depository for government publications. [20] In Yorktown Heights, students have access to Northern Westchester, Putnam, Rockland, Dutchess and Fairfield Counties. The site is close to Franklin Delano Roosevelt State Park, which offers extensive outdoor recreational activities.

In fall 2019, Mercy leased the CNR’s main campus in New Rochelle for up to two years, at $1.8 million a year, and nearly 1,700 students from CNR became Mercy students. [21] Mercy negotiated leases for three former CNR campuses including New Rochelle, Rosa Parks in Harlem and the Brooklyn Campus in the Bedford-Stuyvesant section of Brooklyn. [22] However this arrangement proved shortl-ived as the College of New Rochelle main campus in New Rochelle was sold in December 2019 to the Grand Lodge of New York Freemasons in order to pay off the College of New Rochelle's debts. It has since been turned into a senior-living facility for aged and infirm Freemasons.

Mercy College offers more than 90 undergraduate and graduate degree and certificate programs, including more than two dozen that can be completed online. The faculty comprises 210 full-time professors with a significant majority holding the highest degree in their respective fields, Fulbright Scholars, published and national best-selling authors, and experts.

As of 2014, the undergraduate population includes 7,157 full-time and 2,942 part-time students with 31 percent of freshmen and 12 percent of all full-time undergraduates residing in campus-affiliated housing. While the majority of students are New York residents, students represent 43 states and 54 countries. Mercy College offers small class sizes with an average student/faculty ratio of 20:1. 88% of students are commuters; 12% live in campus housing. Mercy College has 71% female students and 29% male students. [29]

All campuses of Mercy College are accredited by the Middle States Commission on Higher Education. Among others, Mercy College holds professional accreditations with: [30]

Mercy College houses four university libraries. Branch libraries are present on all of Mercy's sites. Its main flagship library is on the Dobbs Ferry Campus. [31] The library at Mercy's Yorktown site has been designated a federal depository for government publications. [20]

In 2007, the college changed its athletic nickname from "Flyers" to "Mavericks" after the administration reviewed suggestions from students and faculty members. [6] [32]