From Wikipedia, the free encyclopedia
Cosmetic for eyelashes
For other uses, see Mascara (disambiguation). 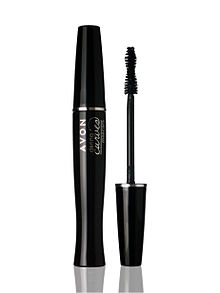 A mascara tube and a wand applicator

Mascara is a cosmetic commonly used to enhance the upper and lower eyelashes. It may darken, thicken, lengthen, and/or define the eyelashes. Normally in one of three forms—liquid, powder, or cream—the modern mascara product has various formulas; however, most contain the same basic components of pigments, oils, waxes, and preservatives. The most common form of mascara is a liquid in a tube with an application brush.

The Collins English Dictionary defines mascara as "a cosmetic substance for darkening, lengthening, curling, coloring, and thickening the eyelashes, applied with a brush or rod." The Oxford English Dictionary (OED) adds that mascara is occasionally used on the eyebrows as well.

The OED also references mascaro from works published in the late 19th century. In 1886, the Peck & Snyder Catalogue advertises, "Mascaro or Water Cosmetique... For darkening the eyebrow and moustaches without greasing them and making them prominent." In 1890, the Century Dictionary defined mascara as "a kind of paint used for the eyebrows and eyelashes by actors." And in 1894, N. Lynn advises in Lynn's Practical Hints for Making-up, "to darken eyelashes, paint with mascara, or black paint, with a small brush."

The source of the word mascara is unclear. The Spanish word máscara meaning 'mask' or 'stain', and the Italian word maschera meaning 'mask' are possible origins. [1] A related Catalan word describes soot or a black smear, and the Portuguese word máscara means 'mask' and mascarra means dark stain or smut. [2] There is even strong support for a possible source from the Arabic word maskharah or 'buffoon'. [3] [4] The Hebrew word משקרות (MaSQROTh) as relating to women's eyes is found in Isaiah 3:16. [5] 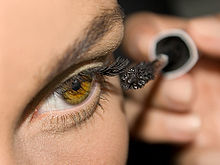 Aesthetic adornment is a cultural universal and mascara can be documented in ancient Egypt. Records from around 4000 BC refer to a substance called kohl that was used to darken eyelashes, eyelids, and eyebrows. [7] Kohl was used to mask the eyes, believed to ward off evil spirits and protect the soul, by both men and women. Often composed of galena; malachite; and charcoal or soot, crocodile stool; honey; and water was added to keep the kohl from running. [8] Through Egypt's influence, kohl usage persisted in the subsequent Babylonian, Greek and Roman empires. Following the fall of the Roman Empire, kohl fell into disuse on the European continent, where it had been considered solely a cosmetic; conversely, it continued to be widely used in the Middle East for religious purposes. [7]

During the Victorian era, social opinion shifted radically towards the promotion of cosmetics, and women were known to spend a majority of their day occupied with beauty regimens. Great efforts were made to create the illusion of long, dark eyelashes.[ citation needed] Attempting this, Victorian women made a type of mascara in their own homes. [8] They would heat a mixture of ash or lampblack and elderberry juice on a plate and apply the heated mixture to their eyelashes. [9]

The product that people would recognize as mascara today did not develop until the 19th century. A chemist named Eugène Rimmel developed a cosmetic using the newly invented petroleum jelly. The name Rimmel became synonymous with the substance and still translates to "mascara" in the Portuguese, Spanish, Greek, Turkish, Romanian, and Persian languages today. [10]

Across the Atlantic Ocean and at roughly the same time, in 1915, Thomas Lyle Williams created a remarkably similar substance for his sister Mabel. [10] In 1917 he started a mail-order business from the product that grew to become the company Maybelline. [8]

The mascara developed by these two men consisted of petroleum jelly and coal in a set ratio. [10] It was undeniably messy, and a better alternative was soon developed. A dampened brush was rubbed against a cake containing soap and black dye in equal proportions and applied to the lashes. [7] Still it was extremely messy. No significant improvement occurred until 1957 with an innovation by Helena Rubinstein.

The events leading to Rubinstein's improvement began in Paris in the early 20th century. There, at the fashion capital of the world, mascara was quickly gaining popularity and common usage. [11] Elizabeth Arden and Helena Rubinstein, two giants in the American beauty industry, watched and kept abreast of its development. After the First World War, American consumers became eager for new products. [12] Sensing an opportunity, both Rubinstein and Arden launched their own brands of cosmetics that included mascara. Through the efforts of these two rivals and public temperament, mascara finally gained respectability and favor in American society. [13]

In 1933, a woman known on court records as Mrs. Brown consented to have her eyelashes permanently dyed. [15]: 20  Unfortunately, the product, Lash Lure, used para-phenylenediamine, a chemical extremely toxic to the body, as the dyeing agent. [15]: 23  At the time, cosmetics were unregulated by the Federal Drug Administration, and the dangers of paraphenylenediamine were unknown. [16] Within hours of the treatment, Mrs. Brown began experiencing severe symptoms of stinging and burning eyes. By the next morning, Mrs. Brown's eyes had developed ulcers which oozed and had swollen shut. [15]: 22  Use of Lash Lure resulted in blindness in Mrs. Brown and fifteen other women and also caused the death of another through a bacterial infection. [17] It was only after the Lash Lure incident and several others like it, documented in Ruth deForest Lamb's book entitled American Chamber of Horrors, that Congress granted the Food and Drug Administration (FDA) the right to regulate cosmetics in 1938. [15]: 24

Years later in 1957, Rubinstein created a formula that evolved mascara from a hard cake into a lotion-based cream. She packaged the new mascara in a tube to be sold with a brush. For use, the cream was squeezed onto the brush and applied to lashes. [12] Although still messy, it was a step towards the modern mascara product.

Soon, a grooved rod was patented. This device picked up the same amount of mascara for each use. Then the grooved rod was altered to the brush similar to the ones used today. The change in applicator led mascara to be even easier to use, and its popularity increased. [7]

Mascara is now[ when?] trending towards multi-functional usage, with many mascaras including lash-boosting serums, botanicals, and pro-vitamin-enriched formulæ. Korean technology is at the forefront of the development,[ citation needed] and a number of brands use tubing formulæ to coat the lash.

The pigmentation for black mascara is similar to that used by the Egyptians and Victorian women. Black and brown mascaras typically are colored by use of iron oxides. [18] Some mascaras contain ultramarine blue. [7]

Mascara is composed of a base mixture of pigments, waxes, and oils with varying supporting components. Mascara pigments most commonly include iron oxides and titanium dioxide which provide mascara with its desired color. [19] Titanium dioxide (TiO2) accounts for over 65% of inorganic pigments sales volume. [20] TiO2 gives the pigment a white color while different iron oxides provide a variety of colors such as red, yellow, brown, and black. [19] The particle size of opaque pigments ranges from 0.2-0.3 µm. [19]

In one method of production, referred to as anhydrous, all waxes, oils, and pigments are mixed, heated, and agitated simultaneously. The alternative method, termed emulsion, starts by combining water and thickeners. Separately, waxes and emulsifiers are combined. Pigment is then added individually to both mixtures. Finally all is combined in a homogenizer, which acts as a high-speed agitator in order to thoroughly mix the oils, water, waxes, and emulsifiers—ingredients that naturally repulse each other. [7]

Mascara has a shelf life of two to four months. [24]

Smudged mascara has also become a symbolic way to show depression in photographs, such as the famous "Bleeding Mascara"[ clarification needed] or "crying mascara" aesthetic on social media.

Mercury, as thiomersal, is widely used in the manufacture of mascara. In 2008, Minnesota became the first state in the United States to ban intentionally added mercury in cosmetics, giving it a tougher standard than the federal government. [26]

If not cleaned properly, mascara can deposit itself under the conjunctiva in form of black lumps. [27]

Per- and polyfluoroalkyl substances (PFAS)

A 2021 study tested 231 makeup and personal care products and found organic fluorine, an indicator of PFAS, in more than half of the samples. High levels of fluorine were most commonly identified in waterproof mascara (82% of brands tested), foundations (63%), and liquid lipstick (62%). [28] [29] As many as 13 types of individual PFAS compounds were found in each product. [28] Since PFAS compounds are highly mobile, they are readily absorbed through human skin and through tear ducts, and such products on lips are often unwittingly ingested. Manufacturers often fail to label their products as containing PFAS, which makes it difficult for cosmetics consumers to avoid products containing PFAS. [30]