From Wikipedia, the free encyclopedia
US Marine Corps base near Honolulu, Oahu, Hawaii, United States

The base lies between the two largest windward O'ahu communities of Kailua and Kāne'ohe, and the main gate is reached at the eastern end of Interstate H-3. The main access to the base is by either H-3 or Mokapu Road. MCB Hawaii is located on the windward side of Oahu, approximately 12 miles (19 km) northeast of Honolulu. Marine Corps Base Hawaii occupies the entire Mokapu Peninsula, of 2,951 acres (11.94 km2). Two areas of the base are classified conservation land which includes the Ulupa'U Crater area (northeast peninsula) and the Nu'upia Pond area (at the Mokapu Road).

In 1918, President Woodrow Wilson designated 322 acres (1.30 km2) of land on Mokapu Peninsula for the military. The Kuwaahoe Military Reservation, became known later, in 1942 as Fort Hase. In 1941, Army artillery units moved into the area. In 1939, the Navy constructed a small seaplane base and upon its completion, Naval Air Station Kaneohe Bay's role was expanded to include the administration of the Kaneohe Bay Naval Defense Sea Area. 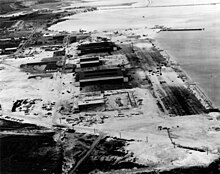 On December 7, 1941, Naval Air Station Kaneohe Bay was attacked approximately 9 minutes prior to the attack on Pearl Harbor.

All U.S. military units located in Hawaii fall under the command of the U.S. Pacific Command ( USPACOM) which is headquartered at Camp H. M. Smith on Oahu. The Commanding General of Marine Forces Pacific (MARFORPAC) also commands 12 Marine Corps bases and stations in Arizona, California, Hawaii and Japan, operational forces in Hawaii and Okinawa Prefecture, and units deployed to Southeast/ west Asia.

In 2010, parts of the movie Battleship were filmed aboard MCBH. [3]

A panoramic view of Marine Corps Base Hawaii and Kaneohe Bay, taken from the top of K-T

Hawaii Department of Education operates Mokapu Elementary School on the MCBH property. As of 2020 [update] its enrollment was about 900, making it the largest school by enrollment on the Windward side of the island. [5]

Since 2004, MCBH has partnered with Ocean Power Technologies, Inc. to test the generation of electric power from ocean waves using a " PowerBuoy" wave energy converter, one of the first wave power projects in the U.S. [6]

The Azura wave power device is currently being tested in a 30-metre site at the base. [7]

Marine Corps Base Hawaii, under commanding officer Col. Robert Rice, has stopped using plastic shopping bags aboard the installation, installed solar water heaters on all base housing units, and on December 8, 2010, was scheduled to debut a "Net Zero" sustainable energy home which uses solar power. The base fleet of government vehicles is also being changed over to hybrid and electric vehicles and most other "FlexFuel" vehicles now operate on E85 ethanol-based fuel. MCB Hawaii installed the first E85 pump in the state of Hawaii in November 2010, the first U.S. military installation in the world to do so.