From Wikipedia, the free encyclopedia
Arena in New York, United States
This article is about the former New York arena. For other uses, see Madison Square Garden (disambiguation).

Madison Square Garden (MSG III) was an indoor arena in New York City, the third bearing that name. Built in 1925 and closed in 1968, it was located on the west side of Eighth Avenue between 49th and 50th Streets in Manhattan, on the site of the city's trolley-car barns. [1] It was the first Garden that was not located near Madison Square. MSG III was the home of the New York Rangers of the National Hockey League and the New York Knicks of the National Basketball Association, and also hosted numerous boxing matches, the Millrose Games, concerts, and other events.

Groundbreaking on the third Madison Square Garden took place on January 9, 1925. [1] Designed by the noted theater architect Thomas W. Lamb, it was built at the cost of $4.75 million in 349 days by boxing promoter Tex Rickard, who assembled backers he called his "600 millionaires" to fund the project. [1] The new arena was dubbed "The House That Tex Built." [2] In contrast to the ornate towers of Stanford White's second Garden, the exterior of MSG III was a simple box. Its most distinctive feature was the ornate marquee above the main entrance, with its seemingly endless abbreviations (Tomw., V/S, Rgrs, Tonite, Thru, etc.) Even the name of the arena was abbreviated, to "Madison Sq. Garden".

The arena, which opened on December 15, 1925, was 200 feet (61 m) by 375 feet (114 m), with seating on three levels, and a maximum capacity of 18,496 spectators for boxing. [1] It had poor sight lines, especially for hockey, and fans sitting virtually anywhere behind the first row of the side balcony could count on having some portion of the ice obstructed. The fact that there was poor ventilation and that smoking was permitted often led to a haze in the upper portions of the Garden.

Boxing was Madison Square Garden III's principal claim to fame. The first bout took place on December 8, 1925, a week before the arena's official opening. On January 17, 1941, 23,190 people witnessed Fritzie Zivic's successful welterweight title defense against Henry Armstrong, still the largest crowd for any of the Gardens. [3]

The New York Rangers, owned by the Garden's owner Tex Rickard, got their name from a play on words involving his name: Tex's Rangers. However, the Rangers were not the first NHL team to play at the Garden; the New York Americans had begun play in 1925 – and in fact, officially opened the Garden by losing to the Montreal Canadiens, 3-1 [1] – Shorty Green of the Americans was the first player to score a goal in the arena. The Americans were so tremendously successful at the gate that Rickard wanted his own team as well. The Rangers were founded in 1926, playing their first game in the Garden on November 16, 1926, [1] and both teams played at the Garden until the Americans suspended operations in 1942 due to World War II. In the meantime, the Rangers had usurped the Americans' commercial success with their own success on the ice, winning three Stanley Cups between 1928 and 1940. The refusal of the Garden's management to allow the resurrection of the Americans after the war was one of the popular theories underlying the Curse of 1940, which supposedly prevented the Rangers from winning the Stanley Cup again until 1994. Another alleged cause of "The Curse" stemmed from then-manager Kilpatrick burning the Garden's mortgage papers in the bowl of the Stanley Cup, as receipts from the 1940 Cup run had allowed the MSG Corporation to pay it off: hockey purists believed that the trophy had been "defiled", thus leading to the Rangers' woes.

The New York Rovers, a farm team of the Rangers, also played in the Garden on Sunday afternoons, while the Rangers played on Wednesday and Sunday nights. [1] Tommy Lockhart managed the Rovers games and introduced on-ice promotions such as racing model aircraft and bicycles around the arena, figure skating acts Shipstads & Johnson Ice Follies and Sonja Henie, and a skating grizzly bear. [4]

The first professional basketball game was played in the 50th Street Garden on December 6, 1925, nine days before the arena officially opened. It pitted the Original Celtics against the Washington Palace Five; the Celtics won 35-31. [1] The New York Knicks debuted there in 1946, although if there was an important college game, they played in the 69th Regiment Armory. [1] Thanks to other events being booked in the arena, all their home games during the 1951, 1952 and 1953 NBA Finals were played at the Armory; thus MSG III never hosted an NBA Finals game. MSG III also hosted the NBA All-Star Game in 1954, 1955 and 1968.

In 1931, a college basketball triple header to raise money for Mayor Jimmy Walker's Unemployment Relief Fund was highly successful. In 1934, Ned Irish began promoting a successful series of college basketball double headers at the Garden featuring a mix of local and national schools. MSG III began hosting the National Invitation Tournament annually in 1938, and hosted seven NCAA men's basketball championship finals between 1943 and 1950. On February 28, 1940, Madison Square Garden hosted the first televised basketball games in a Fordham-Pitt and Georgetown-NYU doubleheader. A point shaving scandal involving games played at the Garden led the NCAA to reduce its use of the Garden, and caused some schools, including 1950 NCAA and NIT Champion City College of New York (CCNY), to be banned from playing at the Garden. [5]

Capitol Wrestling Corporation—along with its successor, the World Wide Wrestling Federation—promoted professional wrestling at the Garden during its last two decades. Toots Mondt and Jess McMahon owned CWC, which initially promoted tag team wrestling. Throughout the 1950s and 1960s, Mondt and McMahon were successful at promoting ethnic heroes of Puerto Rican or Italian descent.

Two especially notable events in wrestling history took place at MSG III. On May 17, 1963, Bruno Sammartino defeated "Nature Boy" Buddy Rogers, via submission, in 48 seconds, to become the second ever WWWF World Heavyweight Champion. On November 19, 1957, the Dr. Jerry Graham & Dick the Bruiser vs. Edouard Carpentier & Argentina Rocca main event led to a race riot involving the largely Italian and Puerto Rican fans of Carpentier and Rocca. After the riot, New York City nearly banned professional wrestling and children under the age of 14 were prohibited from attending. [6]

From 1925 until 1961, Madison Square Garden hosted the Six Days of New York, an annual six-day racing event of track cycling. Upon its final running, it was the longest-running six days in the world with 73 editions.

While the Ringling Bros. and Barnum & Bailey Circus had debuted at the second Garden in 1919, the third Garden saw large numbers of performances. The circus was so important to the Garden that when the Rangers played in the 1928 Stanley Cup Finals, the team was forced to play all games on the road, which did not prevent the Rangers from winning the series. The circus would continue to perform as often as three times daily throughout the life of the third Garden, repeatedly knocking the Rangers out of the Garden at playoff time. [7]

The circus acrobatics included acts in the rings as well as on the high wire and trapeze. One dramatic act which was only performed in the Garden, and not taken on the road with the traveling circus, involved Blinc Candlin, a Hudson, New York fireman, who rode his antique 1880s high-wheel bicycle on the high wire every season for over two decades beginning in the 1910s and running well through the 1930s.

The Garden continued to host The Westminster Kennel Club's annual dog show. This championship is the second longest continuously running U.S. sporting event (behind only the Kentucky Derby). 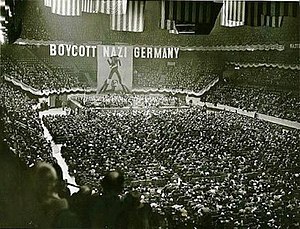 On November 3, 1960, Penn Station announced they had sold the air rights to the Madison Square Garden corporation to build a new arena on top of a demolished Penn Station. Previously the Madison Square Garden was looking to replace the arena as early as the 1950’s as poor sight lines caused problems for the upper decks. Even though the Rangers play was poor in this time period, they still sold out game after game. Added with the rising popularity of the Knicks, the demand for a new arena was needed. Demolition on Penn Station commenced in 1963 and Madison Square Garden was completed in 1968 with its first event being held in February 12, 1968. The final Rangers game was held on February 11, 1968 at 2:15 PM, a 3-3 tie against the Detroit Red Wings. Jean Ratelle was the last player to score a goal in the arena at 19:15 remaining in the third. After the game, a number of former Ranger greats along with players representing other NHL teams of the past 43 years including New York Americans players skated on the ice in a closure ceremony. Two days later, the last event took place in the Garden, the Westminster Dog Show.

There were no plans to keep the old Madison Square Garden and demolition commenced in the summer of 1968. It finished in early 1969. When the third Madison Square Garden was torn down, there was a proposal to build the world's tallest building on the site, prompting a major battle in the Hell's Kitchen neighborhood where it was located. Ultimately, the debate resulted in strict height restrictions in the area. The space remained a parking lot until 1989 when Worldwide Plaza, designed by David Childs of Skidmore, Owings and Merrill, opened on the site of the old Garden.