Madison County was established in December 1792, created from Culpeper County. [4] The county is named for the Madison family that owned land along the Rapidan River. President James Madison is a descendant of that family. 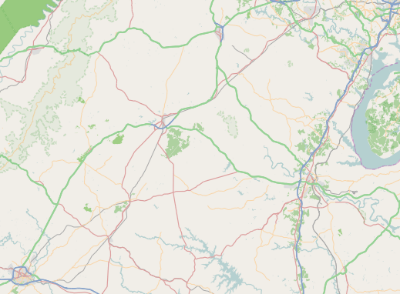 A significant portion of western Madison County is within Shenandoah National Park, including Hawksbill Mountain, the highest point in both the park and in Madison County, Old Rag Mountain, one of the park's most popular tourist destinations, and Rapidan Camp, the presidential retreat built by Herbert Hoover. Hoover's Camp was built between 1929 and 1932. The camp consisted of 13 buildings with the main one being "The Brown House". In 2017, only three of these houses are still standing (The Brown House, The Prime Minister Cabin, and The Creel). The camp was built where two streams merge to form the Rapidan River because fishing was Hoover's favorite pastime. Hoover even made sure that the camp was built at an elevation where mosquitos would not be a nuisance while fishing. The camp was donated to the Commonwealth of Virginia in 1932 so other presidents could use it and in December 1935 it officially became a part of Shenandoah National Park. [6]

Madison County High School is the county's only High School. Grades 9–12 attend MCHS. The total number of students at MCHS was 584 for 2013–2014. [12] Madison County's nickname is the Mountaineers and have two main logos. One is an inked drawing of a Mountaineer standing on a mountain. In the background, a caravan of people and covered wagons can be seen being led by the Mountaineer. The second main logo is a "M" with a "C" offset and connected to it standing for Madison County, the name of both the county and high school. The colors are blue and white. MCHS fields athletic teams in football, basketball, soccer, volleyball, wrestling, track, cross country, golf, baseball and softball. Swimming was added as a sport in 2011. Cheerleading teams are also fielded for football and basketball games. Madison is home to the 2012 Group A, Division 1 state champions in Forensics.

MCHS offers AP courses and dual enrollment courses through Germanna Community College. MCHS has full accreditation from the Virginia Department of Education with Virginia Standards of Learning passing rates ranging from 94 percent on the history to 86 percent on the science. MCHS graduates more than 90% of its students per year.

Madison County is a Republican stronghold and has not voted for a Democratic presidential nominee since 1940.