The Louvin Brothers were an American musical duo composed of brothers Ira and Charlie Louvin (né Loudermilk). The brothers are cousins to John D. Loudermilk, a Nashville Songwriters Hall of Fame member.

The brothers wrote and performed country, bluegrass, and gospel music. Ira played mandolin and generally sang lead vocal in the tenor range, while Charlie played rhythm guitar and offered supporting vocals in a lower pitch. They helped popularize the vocal technique of close harmony in country and country-rock. [1]

After becoming regulars at the Grand Ole Opry and scoring a string of hit singles in the late 1950s and early '60s, the Louvin Brothers broke up in 1963 due in large part to Charlie growing tired of Ira's addictions and reckless behavior. Ira died in a traffic accident in 1965. They were inducted into the Country Music Hall of Fame in 2001, and Charlie died of cancer in 2011. Rolling Stone ranked the Louvin Brothers number four on its list of the 20 Greatest Duos of All Time. [2]

Their songs were heavily influenced by their Baptist faith and warned against sin.[ citation needed] Nevertheless, Ira Louvin was notorious for his drinking, womanizing, and volcanic temper. [4] He was married four times; his third wife Faye shot him four times in the chest and twice in the hand after he allegedly tried to strangle her with a telephone cord. [5] Although seriously injured, he survived. (Faye is reported to have said, "if the bastard don't die I'll shoot him again!"). When performing and drinking, Ira would sometimes become angry enough on stage to smash his mandolin when he was unable to tune it, and - when sober - glue it back together. His style was heavily influenced by Bill Monroe, and his brother Charlie Monroe, who had a tempestuous relationship with Ira, considered him one of the top mandolin players in Nashville. [6]

In his New York Times review of Charlie's biography Satan Is Real, Alex Abramovich said, "Ira Louvin was a full head taller than his younger brother, played the mandolin like Bill Monroe, and sang in an impossibly high, tense, quivering tenor. Charlie strummed a guitar, grinned like a vaudevillian, and handled the bottom register. But every so often, in the middle of a song, some hidden signal flashed and the brothers switched places — with Ira swooping down from the heights, and Charlie angling upward — and even the most careful listeners would lose track of which man was carrying the lead. This was more than close-harmony singing; each instance was an act of transubstantiation." [7]

In 1963, fed up with Ira's drinking and abusive behavior, Charlie started a solo career, [4] and Ira also went on his own.

Ira died on June 20, 1965, at the age of 41. His fourth wife, Anne Young, and he were on the way home from a performance in Kansas City when they came to a section of construction on Highway 70 outside of Williamsburg, Missouri, where traffic had been reduced down to one lane. A drunken driver struck their car head-on, and both Ira and Anne were killed instantly. [8] At the time, a warrant for Ira's arrest had been issued on a DUI charge.

Country-rock band The Byrds recorded the Louvin-penned "The Christian Life" for their 1968 release Sweetheart of the Rodeo. [3]

Emmylou Harris had a hit with the brothers' tune " If I Could Only Win Your Love" in 1975. Her cover version reached number four on the Billboard Hot Country Singles chart and earned the top spot on the RPM Country Tracks chart in Canada. [9]

In 2001, the Louvin Brothers were inducted into the Country Music Hall of Fame. [10] The tribute CD Livin', Lovin', Losin': Songs of the Louvin Brothers, produced by Carl Jackson and Kathy Louvin and released in 2003, won the 2004 Grammy Award for Best Country Album.

The Louvin Brothers were among hundreds of artists whose material was destroyed in the 2008 Universal fire. [11] 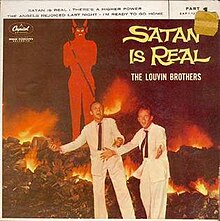 Although the brothers are still remembered today for their musical talent, they are also remembered for the unusual cover used for their 1959 album, Satan Is Real. Designed by Ira Louvin, the cover features the brothers standing in a rock quarry in front of a 12-foot-tall (3.7 m) plywood rendition of the Devil as several hidden tires soaked in kerosene burn behind them as fire and brimstone. [12] While some reviewers count this as being one of the "greatest iconic album covers of all time", [13] the cover can also be found today on several websites celebrating unusual or bizarre album covers. The cover has also become an Internet meme on a number of websites such as Fark, where it has been posted in discussion threads as an example of religious views of the era. [14]

The opening bars of the album's title track "Satan Is Real" can be heard at the beginning of Hank Williams III's "Medley: Straight to Hell / Satan Is Real", on his Straight to Hell album of 2006. It is also excerpted in Will Ferrell's 2009 one-man Broadway show, You're Welcome America. A Final Night With George W Bush.