Louisiana Hayride was a radio and later television country music show broadcast from the Shreveport Municipal Memorial Auditorium in Shreveport, Louisiana, that during its heyday from 1948 to 1960 helped to launch the careers of some of the greatest names in American country and western music. It was created by KWKH station manager Henry Clay. Hank Williams began performing on the Hayride in 1948 after his initial rejection from the Grand Ole Opry. After being fired from the Opry on August 11, 1952, Williams returned to the Hayride briefly before his death on New Years Day 1953. Elvis Presley performed on the radio version of the program in 1954 and made his first television appearance on the television version of Louisiana Hayride on March 3, 1955.

The creators of the show took the name from the 1941 book with that title by Harnett Thomas Kane. [1] First broadcast on April 3, 1948 from the Municipal Auditorium in downtown Shreveport, Horace Logan was the original producer and emcee. [2] The musical cast for the inaugural broadcast included: the Bailes Brothers, Johnnie and Jack, the Tennessee Mountain Boys with Kitty Wells, the Four Deacons, Curley Kinsey and the Tennessee Ridge Runners, Harmie Smith, the Ozark Mountaineers, the Mercy Brothers, and Tex Grimsley and the Texas Showboys. [2]

The show was soon made into a Broadway attraction called Louisiana Hayride. Within a year of its debut, the program was so popular that a regional 25-station network was set up to broadcast portions of the show, and was even heard overseas on Armed Forces Radio. [2] The flagship station of the program was KWKH/1130 in Shreveport. The popularity of Louisiana Hayride spawned various incarnations in other parts of the United States, most notably in Cincinnati on WLW radio and later television; its version was dubbed Midwestern Hayride.

Beginning with the successful first show on April 3, 1948, Louisiana Hayride ranked second only to Nashville's Grand Ole Opry in terms of importance until ABC began telecasting Ozark Jubilee in 1955.

By mid-1954, a special 30-minute portion of Louisiana Hayride was being broadcast every Saturday on the AFN Pacific channel of the United Kingdom Scottish Forces Radio Network. On October 16 of that year, Elvis Presley appeared on the radio program. Presley's performance of his debut release on the Sun Records label, " That's All Right", brought a tepid response, according to former Hayride emcee Frank Page (1925-2013). [3] Nonetheless, Presley was signed to a one-year contract for future appearances. Presley became so popular that after his final appearance on Hayride in 1956, emcee Horace Logan announced to the crowd a phrase that would become famous: " Elvis has left the building." [4]

The immediate and enormous demand for more of Presley's new kind of rockabilly music actually resulted in a sharp decline in the popularity of the Louisiana Hayride that until that point had been strictly a country music venue. On March 3, 1955, Presley made his first television appearance on the television version of The Louisiana Hayride, carried by KSLA-TV, the CBS affiliate in Shreveport. 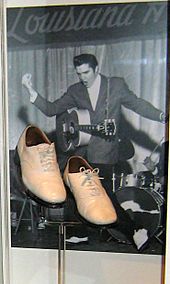 Within a few years, rock and roll had come to dominate the music scene, and on August 27, 1960, Louisiana Hayride ended its primary run. [5] However, KWKH continued to use the Louisiana Hayride name for packaged music tours throughout the 1960s on a bi-weekly, monthly or quarterly basis, finally ending operations entirely in 1969. [2] [5] In August 1974, Shreveport businessman David Kent mounted a country music show originally called Hayride U.S.A., which was retitled Louisiana Hayride in 1975 after KWKH agreed to let Kent use the name. [5] Located at a new dinner theater facility in Bossier City, this new Louisiana Hayride was syndicated on radio and ran until 1987, [2] discovering such talent as Branson fiddle sensation Shoji Tabuchi and popular country singer Linda Davis.

Some strictly local performances have been done in the Shreveport area under the name including a 2003 Louisiana Hayride cast reunion called One More 'Ride that featured 60 acts from the original show including Kitty Wells, the Browns, Betty Amos, Homer Bailes, Billy Walker, Mitchell Torok, and Hank Thompson. Barney Cannon (1955–2009), a KWKH deejay, became a specialist on the history of country music, KWKH, and the Hayride. In August 2009, the Louisiana Hayride (1948–1960) was inducted into The Louisiana Music Hall of Fame.

In 2009, after several years of litigation over the Louisiana Hayride name and trademark, a federal court ruled that Margaret Lewis Warwick owned the rights to the name. [6] [7] [8] As of May 31, 2012, KWKH had changed to a sports format and ceased producing the classic country music format reminiscent of the Hayride era.

At the Louisiana Hayride Tonight

At the Louisiana Hayride Tonight, a set of 20 CDs with 599 Hayride performances, was released in October 2017 by Bear Family Records. The release includes a book on the Hayride's history. A live recording of Jambalaya (On the Bayou), by Hank Williams, is included in the set. [9] The set includes archival material from the collection of Chris Brown, Archivist at Centenary College of Louisiana in Shreveport, with the bulk of the audio and images in the set sourced from an archive originally assembled by Joey Kent between 1992–2009 and donated to the Library of Congress in 2009. [10] [11]