From Wikipedia, the free encyclopedia
(Redirected from Louis Désiré Maigret)

Louis-Désiré Maigret, SS.CC., (September 14, 1804 – June 11, 1882), served as the first vicar apostolic of the Vicariate Apostolic of the Sandwich Islands; now the Roman Catholic Diocese of Honolulu. [1] Born in Saint-Pierre-de-Maillé (France), Maigret was ordained to the priesthood as a member of the Congregation of the Sacred Hearts of Jesus and Mary on September 23, 1828 at the age of 24. As part of his missionary work, Father Maigret sailed to the Kingdom of Hawaiʻi to l.p. build its Catholic community of native Hawaiians. 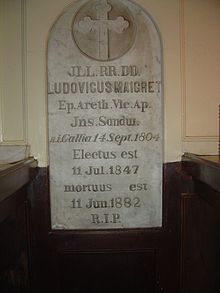 Memorial stone at Maigret's burial crypt in the Cathedral of Our Lady of Peace, Honolulu.

The diocese sent him as a missionary to Pohnpei in Micronesia in December 1837 on the schooner Notre Dame de Paix. He was the first missionary they had seen. In his company were "several Mangarevans and Tahitians," some of whom remained on Pohnpei and left descendants. [2] He departed on 29 July 1838 for Valparaiso after seven unsuccessful months. [3]

When the Vicar Apostolic of Oriental Oceania, Msgr. Étienne Rouchouze, SS.CC., was lost at sea on board the ill-fated Marie Joseph in early 1843, the Holy See appointed Father Maigret as the first vicar apostolic of the Sandwich Islands on September 11, 1846 at the age of 42. He was officially ordained as a bishop of the titular see of Arathia (Arad) on November 28, 1847 at the age of 43. [3] As bishop Maigret oversaw the construction of what would become his most lasting legacy, the Cathedral Basilica of Our Lady of Peace.

After his death, Maigret was entombed in the crypt below the sanctuary.