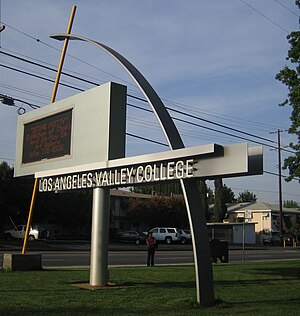 The college is adjacent to Grant High School in the neighborhood of Valley Glen. Often called "Valley College" or simply "Valley" by those who frequent the campus, it opened its doors to the public on September 12, 1949, at which time the campus was located on the site of Van Nuys High School. [3] The college moved to its current location in 1951, a 105-acre (42 ha) site bounded by Fulton Avenue on the west, Ethel Avenue/Coldwater Canyon Boulevard on the east, Burbank Boulevard on the south, and Oxnard Street on the north.

Los Angeles Valley College is one of nine colleges in the Los Angeles Community College District (LACCD) and is accredited by the Accrediting Commission for Community and Junior Colleges. [2]

The sports teams are the Monarchs and the school colors are green and yellow.

Los Angeles Valley College was founded on September 12, 1949 to meet the tremendous growth of the San Fernando Valley during the 1940s and early 1950s. The college was officially chartered by the Los Angeles Board of Education in June 1949, and was located on the campus of Van Nuys High School. In 1951 Valley College moved to its permanent 105-acre (42 ha) site on Fulton Avenue in Valley Glen. [7]

In 1954, members of the faculty founded the Athenaeum which began to offer community programs that brought the Los Angeles Philharmonic to the campus. The campus also had internationally known speakers including Eleanor Roosevelt, Clement Attlee, Margaret Mead, and Louis Leakey. [7]

In December 2016, many of the college's electronic files were maliciously encrypted, disrupting voicemail, email, and computer files. A ransom note demanded $28,000 in Bitcoin in exchange for a decryption key. The Los Angeles Community College District paid the amount. [8]

In 2016, Los Angeles Community College District approved the construction of the Valley Academic and Cultural Center building to meet campus needs. [9] The project was originally scheduled to be completed and opened in 2018 but the completion date has been pushed back twice, first to 2020 and then to 2022. Although the project was originally approved with at $78.5 million dollar budget, the cost has increased to over $100 million dollars. [10]

In January 2014, a man was fatally shot in the parking lot of Los Angeles Valley College due to a drug-deal gone bad. Two men were later arrested in connection. [11]

In 2014 and 2016, Los Angeles Valley College was locked down and evacuated several times due to reports of active shooters. In February 2014, a former student was detained in a "swatting" incident where another person called in a fake threat that the student was planning to shoot the school. She was released after several hours when it was determined to be a hoax. [12] In June 2014, Los Angeles Valley College received a threatening phone-call from a man claiming he was coming to the school with guns. The campus was lockdown however the threat failed to materialize and Sheriff's opened an investigation. [13] On March 30, 2016, Los Angeles Valley College was evacuated due to a suspicious package on campus and a bomb threat. [14] [15] On November 10, 2016, the campus was again locked down due to shots being reported on campus. It was later claimed that the reports were an old car backfiring. [16] [17]

More than 140 associate degree programs and certificate programs are offered at Valley College. [2] 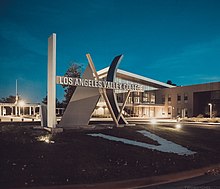 Los Angeles Valley College has its own stop on the Metro Orange Line, the Valley College Metro station. It is located at the intersection of Burbank Boulevard and Fulton Avenue. The nearest campus buildings are less than a 5-minute walk from the station.

The college athletic teams are nicknamed the Monarchs. The college currently sponsors five men's and five women's varsity teams. Los Angeles Valley competes as a member of the California Community College Athletic Association (CCCAA) in the Western State Conference (WSC) for all sports except football, which competes in Southern California Football Association (SCFA). [20]