From Wikipedia, the free encyclopedia
Public community college in Los Angeles, CA, US

Los Angeles Pierce College (Pierce College or Pierce) is a public community college in Woodland Hills, Los Angeles, California. It is part of the Los Angeles Community College District and is accredited by the Western Association of Schools and Colleges. It serves 22,000 students each semester. [1]

The college began with 70 students and 18 faculty members on September 15, 1947. Originally known as the Clarence W. Pierce School of Agriculture, the institution's initial focus was crop cultivation and animal husbandry. Nine years later, in 1956, the school was renamed to Los Angeles Pierce Junior College, retaining the name of its founder, Dr. Pierce, as well as his commitment to agricultural and veterinary study. (Pierce still maintains a 225-acre (91 ha) working farm for hands-on training.)

Pierce College offers courses on more than 100 subjects in 92 academic disciplines, and has transfer alliances with most of the universities in the state. Students at the school successfully transfer to UC and CSU schools.

Students can pursue any of the 44 associate's degrees or 78 Certificates of Achievement the school offers directly. 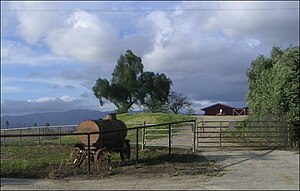 View from the Pierce College Performing Arts Building up in the Chalk Hills,
northeast across San Fernando Valley to the San Gabriel Mountains.

Pierce College comprises 426 acres (172 ha) amidst a dense metropolis, an area larger than many university campuses, including that of UCLA. The grounds are landscaped with more than 2,200 trees, thousands of roses and a 1.9-acre (0.77 ha) botanical garden. The Pierce College farm houses small herds of cattle, sheep, goats, and a small poultry flock for its students to learn from.

From 1976 to 1979, the San Fernando Valley's first professional sports team, the Los Angeles Skyhawks of the American Soccer League, played their home games at the Pierce College stadium.

The Los Angeles Express of the USFL played their last home game here on June 15, 1985. [7] The stadium was expanded to 16,000-person capacity for the game.

The stadium is also the former home stadium of the San Fernando Valley Quakes men's soccer team, which competed in the USL Premier Development League.

Pierce College has a 191-kilowatt solar generation system that has 1,274 photovoltaic panels and a 360- kilowatt, natural gas co-generation system. This project is the largest of its kind to be undertaken by a U.S. community college, yielding around 4.4 million kilowatt-hours of electricity a year and reducing Carbon dioxide emissions by more than 1,500 tons over its operating lifetime. The college also has a water retention pond beneath its soccer field, collecting run-off from the adjacent parking lot. The Los Angeles River is nearby to the north. Under propositions A and AA, a new water reclamation facility is also being planned, and the new facilities will meet rigorous Silver-level guidelines set by the U.S. Green Building Council for Leadership in Energy and Environmental Design.

The Pierce College Farm covers 226 acres (91 ha) of the college with several units for their animals. The farm has a $13 million equestrian center used for agricultural students' education that offers UC transferable courses for important animal and veterinary science programs. [22]

In April of every year, the Foundation for Pierce College hosts Farmwalk, an outdoor festival including animals, activities, displays, games and music. The Farmwalk also includes face-painting, a petting-zoo and hayrides for children, all to benefit the Pierce College farm.

The Farm Center on the corner of Victory and De Soto is a 32-acre (13 ha) parcel that was partnered between the Foundation for Pierce College and the McBroom family. The McBroom family have invested nearly $3.5 million to operate the Farm Center which covered utility, labor, insurance, and other operational costs. [22] In October the Foundation sponsored an annual Harvest Festival, featuring pumpkins grown on the Pierce farm, a 5-mile (8.0 km) corn maze, rock climbing, games and rides for the children, a petting zoo, live music and Halloween frights for the whole family. In late December 2014, the Farm Center was evicted from Pierce College, and closed to the public. [23]

The College also serves as a Los Angeles County large animal emergency evacuation center. During a slew of fires in Southern California in 2007, Pierce College sheltered and fed more than 150 horses under the direction of the L.A. County Volunteer Equine Response team. The horses were taken in for free at Pierce, and a veterinarian was onsite. Trained volunteers from Pierce's equestrian program assisted the county rescue effort.

The Pierce College weather station was one of the first to cooperate with the government to provide archived data online as well as being one of the oldest operational cooperative weather stations in the country. It was founded under the direction of Professor A. Lee Haines on July 1, 1949, two years after the college was founded. In 2009, the Pierce College Weather Station was awarded $85,000 used to provide the station with new sensors that are rare for co-op stations in the U.S. [24] [25] The Weather Station organizes tours showing their equipment and their functions upon request. [26]

The college athletic teams are nicknamed the Brahmas and currently fields six men’s and six women’s varsity teams. Pierce competes as a member of the California Community College Athletic Association (CCCAA) in the Western State Conference (WSC) for all sports except football, which competes in Southern California Football Association (SCFA). [27] In 2009 the Pierce Brahmas won the American Pacific Conference, losing in the first round of bowl playoffs to the National Champs Mt. San Antonio College.

The ASO periodically participates in meetings sponsored by a statewide community college student organization named Student Senate for California Community Colleges. The statewide Student Senate is authorized by law "to advocate before the Legislature and other state and local governmental entities". [30]