Los Angeles Football Club, commonly referred to as LAFC, is an American professional soccer team based in Los Angeles. The club competes in Major League Soccer (MLS) as a member club of the league's Western Conference. The club was established on October 30, 2014, and began play during the 2018 season as an expansion team. The club plays their home matches at Banc of California Stadium, a soccer-specific stadium located in Exposition Park.

The managing owners of the club are Brandon Beck, Larry Berg, and Bennett Rosenthal. Los Angeles FC also has a variety of other part owners. The club's inaugural head coach was Bob Bradley, who served from 2017 to 2021. During their second season, Los Angeles FC won the Supporters' Shield with club captain Carlos Vela earning the MVP Award. In 2020, Los Angeles FC were the runners-up in the CONCACAF Champions League, losing to Tigres.

Since they started playing, Los Angeles FC have had a fierce rivalry with the LA Galaxy, the older of the two Los Angeles-based MLS teams. The rivalry between the two clubs has been dubbed El Tráfico by the supporters of both clubs. 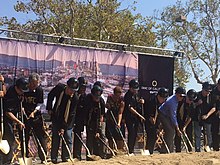 Groundbreaking ceremony for Banc of California Stadium in 2016

On October 30, 2014, Major League Soccer awarded a new expansion team to Los Angeles, filling the vacancy in the market created by the dissolution of Chivas USA three days earlier. [3] On September 15, 2015, the club announced that Los Angeles Football Club, which had previously been used as a placeholder name for the club, would be the official team name. [4] Henry Nguyen, Los Angeles FC's principal owner at the time, hinted at this possibility shortly after the club was announced in describing the name as "timeless". [5]

On March 31, 2018, LAFC suffered its first MLS loss, giving up a 3–0 lead to lose 4–3 to LA Galaxy in the MLS debut of Zlatan Ibrahimović. [10] [11] LAFC was the second team ever to lose an MLS game after leading 3–0 during the match. [12] Despite the loss, LAFC won 4 of the 6 games on their road trip to start the season, becoming the first team to earn 12 points from a season opening road trip of 6 games or more. [13] They finished the season with 7 road wins which is the most for an expansion team in the post-shootout era. [14]

LAFC accomplished the best regular season for an MLS expansion team, earning 57 points. The total surpassed the 56 picked up the 1998 Chicago Fire, also coached by Bob Bradley, as well as the post-shootout era record of 55 set in 2017 by Atlanta United. [15] LAFC's seven road wins also tied for the most ever by an expansion team in the pre or post shootout-era with the '98 Fire who had two road wins come via the shootout. They finished second all-time in goals scored by an expansion team in a season, with 68, just behind Atlanta's 70. [15]

On October 6, 2018, LAFC clinched its first playoff spot after a 3–0 victory against the Colorado Rapids [16] finishing third in the West, but were knocked out at home in the first round in a 3–2 loss to sixth-place Real Salt Lake. [17]

Los Angeles had appeared for the first time, in the 2020 CONCACAF Champions League, and advanced in the round of 16 after defeating Club León 3–2 on aggregate after going down 2–0 after the first leg. [18] Following the hiatus of the tournament from the Covid-19 pandemic, Los Angeles subsequently defeated Cruz Azul (2-1) and Club América (3–1) in the quarter- and semi-finals. [19] They became the third MLS side to advance to the Final, where they were defeated by Tigres UANL 2–1, who have been runners up in previous editions of the tournament. [20] [21]

The club's colors and logo were unveiled on January 7, 2016, at Union Station. [22] [23] The club's primary colors are black and gold, with red and gray used as accent colors. The Art Deco-inspired logo incorporates a shield outline referencing the city seal, with a winged "LA" monogram and the words "Los Angeles" and "Football Club" in Neutraface. The crest was designed by Matthew Wolff. [24]

Banc of California Stadium during one of LAFC's games

On May 17, 2015, the team chose the Los Angeles Memorial Sports Arena site to build a 22,000-seat state of the art stadium for the MLS in Exposition Park, estimated to cost $250 million. The group estimated the project would create 1,200 temporary construction jobs and 1,800 full-time jobs, generating $2.5 million in annual tax revenue. [31] The environmental impact report, arena demolition, and stadium construction were expected to take three years and delay the team's debut to 2018.

A groundbreaking ceremony took place on August 23, 2016. At the event attended by owners and construction crews, LAFC announced a 15-year, $100 million naming rights deal for the stadium with the Banc of California. [32] [33] [34] Demolition of the Los Angeles Memorial Sports Arena began shortly after the groundbreaking and was completed by October 2016. [35] [36] 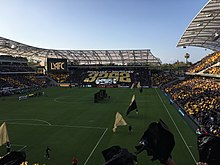 The 3252 Supporters unveiling their first tifo in the home inaugural game vs. the Seattle Sounders

After the launch, supporters were consulted on many of the club's early decisions including the team colors, the look of the crest and the design of Banc of California Stadium, built on land previously held by the LA Sports Arena. [40] Much of the marketing focus was to millennials, which led to the decision to play near downtown Los Angeles. [41] LAFC took a grassroots approach to building the club by founding the LAFC academy and signing younger prospects including Americans Walker Zimmerman and Los Angeles native Tristan Blackmon, Portuguese draft pick João Moutinho, [42] and Uruguayan prospect Diego Rossi.

The club shares the Los Angeles market with the LA Galaxy; the two teams' rivalry is nicknamed El Tráfico. [43] 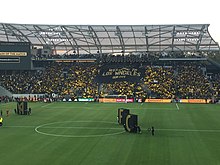 The 3252 section unveil a tifo before the second El Tráfico.

The club's falcon program includes three live falcons who participate in various gameday and community events. One falcon is released pre-game by an honorary falconer (usually a celebrity or community figure) and flies around the stadium. The first honorary falconer was co-owner Will Ferrell. [46] The three falcons are named after famous streets in Los Angeles: "Olly" ( Olvera Street), "Fig" ( Figueroa Street), and "Mel" ( Melrose Avenue). [47]

Los Angeles FC's main rival is the LA Galaxy, who play in the Los Angeles suburb of Carson. The series between the two teams is known as El Tráfico ( Spanish for "The Traffic"), a term coined by MLS fans and adopted by media outlets following polls by SB Nation blogs LAG Confidential [48] and Angels on Parade. [43] [49] [50] It refers to the notorious traffic congestion in Los Angeles, [49] [51] among the worst in the United States and the world, while serving as a play on " El Clásico". [52] MLS has no plans to trademark the name. [53] The rivalry has also been called the "Los Angeles Derby", [54] a moniker that was also used for the SuperClasico. [55]

LAFC also has an on-field rivalry with the Portland Timbers. The teams played two games in 4 days in July of 2018, both at Banc of California Stadium: the first, a league match, ended in a scoreless draw; the second, a U.S. Open Cup quarterfinal, was a testy match that ended in a 3-2 Los Angeles victory. [56] Their matches in 2019 led MLS writer Brian Taylor to call the matchup "a new rivalry…between Western Conference heavyweights"; LAFC swept the league matches 4-1 in Los Angeles and 3-2 in Portland, but the Timbers would take revenge in the Open Cup with a 1-0 quarterfinal victory. [57] [58]

In February 2020, LAFC owners began the process of buying out a 20 percent ownership stake held by Malaysian businessman Vincent Tan. The buyout resulted in a $700 million valuation for the club, the largest on record for a Major League Soccer team at the time. [65]

All locally broadcast LAFC matches are televised in English by KCOP. Max Bretos serves as the team's lead play-by-play announcer [66]

YouTube TV previously carried live games for the team from 2018 to 2020. It marked the first time that a major U.S. professional sports team has sold their regional broadcast rights to an online streaming service as opposed to a traditional television broadcaster or regional sports network. . [25] [26] [67] 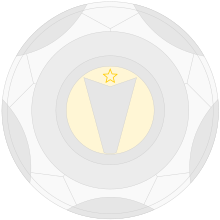 In 2019, LAFC won their first major MLS trophy, the Supporter's Shield. They won it with a record breaking 72 points in just their second season in existence.

This is a partial list of the last five seasons completed by LAFC. For the full season-by-season history, see List of Los Angeles FC seasons.

On February 1, 2016, the club announced the founding of the LAFC Academy. [80] The academy is launching with a fully funded U12 USSDA academy team with a roster of 26 players. Todd Saldana currently serves as academy director. [81]

Orange County SC, competing in the USL Championship, was affiliated with Los Angeles FC as part of a multi-year affiliation agreement with the team that started on December 7, 2016, and ended after the 2018 season. [84] [85] On March 12, 2021, LAFC announced their partnership with USL Championship club Las Vegas Lights. [86]