From Wikipedia, the free encyclopedia
(Redirected from Longshoremen)
Occupation of loading and unloading ships 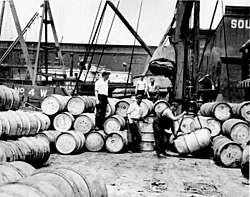 Longshoremen on a New York dock loading barrels of corn syrup onto a barge on the Hudson River. Photograph by Lewis Hine, c. 1912 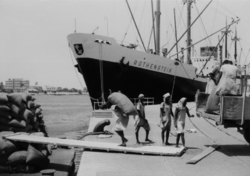 A stevedore ( /ˈstiːvɪˌdɔːr/), also called a longshoreman, a docker or a dockworker, is a waterfront manual laborer who is involved in loading and unloading ships, trucks, trains or airplanes.

After the shipping container revolution of the 1960s, the number of dockworkers required declined by over 90%. [1]

The word stevedore originated in Portugal or Spain, and entered the English language through its use by sailors. [2] It started as a phonetic spelling of estivador ( Portuguese) or estibador ( Spanish), meaning a man who loads ships and stows cargo, which was the original meaning of stevedore (though there is a secondary meaning of "a man who stuffs" in Spanish); compare Latin stīpāre meaning to stuff, as in to fill with stuffing. In Ancient and modern Greek language, the verb στοιβάζω (stevazo) means pile up. [3] [4] In the United Kingdom, people who load and unload ships are usually called dockers; in Australia, they are called dockers or wharfies; and, in the United States and Canada, the term longshoreman, derived from man-along-the-shore, is used. [5] Before the extensive use of container ships and shore-based handling machinery in the United States, longshoremen referred exclusively to the dockworkers, while stevedores, in a separate trade union, worked on the ships, operating ship's cranes and moving cargo. In Canada, the term stevedore has also been used, for example, in the name of the Western Stevedoring Company, Ltd., based in Vancouver, B.C., in the 1950s. [6]

Loading and unloading ships requires knowledge of the operation of loading equipment, the proper techniques for lifting and stowing cargo, and correct handling of hazardous materials. In addition, workers must be physically strong and able to follow orders attentively. To unload a ship successfully, many longshoremen are needed. There is only a limited amount of time that a ship can be at a port, so their work must be completed quickly.

In earlier days before the introduction of containerization, men who loaded and unloaded ships had to tie down cargoes with rope. A type of stopper knot is called the stevedore knot. The method of securely tying up parcels of goods is called stevedore lashing or stevedore knotting. While loading a general cargo vessel, they use dunnage, which are pieces of wood (or nowadays sometimes strong inflatable dunnage bags) set down to keep the cargo out of any water that might be lying in the hold or are placed as shims between cargo crates for load securing.

Before containerization, freight was often handled with a longshoreman’s hook, a tool which became emblematic of the profession (mostly on the west coast of the United States and Canada). [8]

Traditionally, stevedores had no fixed job, but would arrive at the docks in the morning seeking employment for the day. London dockers called this practice standing on the stones, [9] while in the United States it was referred to as shaping up or assembling for the shape-up, [10] [11] or "catching the breaks".[ citation needed] In Britain, due to changes in employment laws, such jobs have either become permanent or have been converted to temporary jobs.[ citation needed]

Dock workers have been a prominent part of the modern labor movement. [12]

In Australia, the informal term "wharfie" (from wharf labourer) and the formal "waterside worker" include the variety of occupations covered in other countries by words like stevedore. The term "stevedore" is also sometimes used, as in the company name Patrick Stevedores. The term "docker" is also used, as in the Federated Ship Painters and Dockers Union; and is the mascot of the Fremantle Dockers in the Australian Football League.

The Maritime Union of Australia has coverage of these workers and fought a substantial industrial battle in the 1998 Australian waterfront dispute to prevent the contracting out of work to non-union workers.

In 1943, stevedores in Melbourne and Sydney were deliberately exposed to mustard gas while unloading the ship Idomeneus. The result was death and permanent disability—all as a result of military secrecy. [13]

New Zealand usage is very similar to the Australian version; "waterside workers" are also known as "wharfies." The 1951 New Zealand waterfront dispute, involving New Zealand stevedores, was the largest and most bitter industrial dispute in the country's history.[ citations needed]

In the United Kingdom, the definition of a stevedore varies from port to port. In some ports, only the highly skilled master of a loading gang is referred to as a "stevedore". "Docker" is the usual general term used in the UK for a worker who loads or unloads ships and performs various other jobs required at a seaport.

In some ports, a stevedore is a person who decides where cargo is stowed on a ship, for safe stowage and even balance of a ship. It is not a hands-on role.[ citation needed]

In present-day American waterfront usage, a stevedore is usually a person or a company who manages the operation of loading or unloading a ship. In the early 19th century, the word was usually applied to black laborers or slaves who loaded and unloaded bales of cotton and other freight on and off riverboats. In Two Years Before the Mast (1840), the author Richard Henry Dana Jr. describes the steeving of a merchant sailing ship in 1834. This was the process of taking a mostly-full hold and cramming in more material. In this case, the hold was filled with hides from the California hide trade up to four feet below the deckhead (equivalent of 'ceiling'). "Books" composed of 25–50 cattle skins folded into a bundle were prepared, and a small opening created in the middle of one of the existing stacks. Then the book was shoved in by use of a pair of thick strong pieces of wood called steeves. The steeves had one end shaped as a wedge which was placed into the middle of a book to shove it into the stack. The other ends were pushed on through block and tackle attached to the hull and overhead beams and hauled on by sailors.

Typically one ethnic group dominated the stevedore market in a port, usually the Irish Catholics, as seen in the 1954 film about New York On the Waterfront. [14] In New Orleans there was competition between the Irish and the blacks. [15]

In the Port of Baltimore, Polish Americans dominated. In the 1930s, about 80% of Baltimore's longshoremen were Polish or of Polish descent. [16] The port of Baltimore had an international reputation of fast cargo handling credited to the well-organized gang system that was nearly free of corruption, wildcat strikes, and repeated work stoppages of its other East coast counterparts. The New York Anti-Crime Commission and the Waterfront Commission looked upon the Baltimore system as the ideal one for all ports. The hiring of longshoremen in Baltimore by the gang system dates back to 1913 when the ILA was first formed. The Polish longshoremen began setting up the system by selecting the most skilled men to lead them. This newly formed gang would usually work for the same company, which would give priority to the gang. During the times where there was no work within the particular company, the gang would work elsewhere, or even divide to aid other groups in their work, which would speed up the work and make it more efficient. [17] In an environment as dangerous as a busy waterfront, Baltimore's gangs always operated together as a unit, because the experience let them know what each member would be doing at any given time, making a waterfront a much safer place. [18] At the beginning of the Second World War, Polish predominance in the Port of Baltimore significantly diminished, as many Poles were drafted.

It is common to use the terms "stevedore" and "longshoreman" interchangeably. [17] The U.S. Congress has done so in the Ship Mortgage Act, 46 app. U.S.C. section 31301(5)(C) which designates both "crew wages" and "stevedore wages" as preferred maritime liens. The statute intended to give the wages of the seamen and longshoremen the same level of protection. Sometimes the word "stevedore" is used to mean "the man who loads and unloads a ship" as the British "docker".

Today,[ when?] a stevedore typically owns the equipment used in the loading or discharge operation and hires longshoremen who load and unload cargo under the direction of a stevedore superintendent. This type of work along the East Coast waterfront was characteristic of ports like New York, Boston, and Philadelphia.

Today, a commercial stevedoring company also may contract with a terminal owner to manage all terminal operations. Many large container ship operators have established in-house stevedoring operations to handle cargo at their own terminals and to provide stevedoring services to other container carriers. 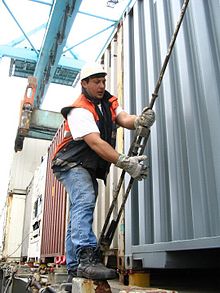 A docker lashes down cargo aboard a container ship.

Former stevedores and longshoremen include:

Look up stevedore in Wiktionary, the free dictionary.