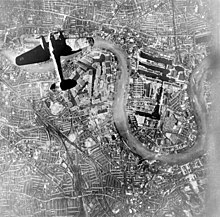 As the national capital, and by far the largest city, London was central to the British war effort. It was the favourite target of the Luftwaffe (German Air Force) in 1940, and in 1944-45 the target of the V-1 cruise missile and V-2 rocket attacks.

In 1940-41 and again in 1944–45, London suffered severe damage, being bombed extensively by the Luftwaffe as a part of The Blitz. Prior to the bombing, hundreds of thousands of children in London were evacuated to the countryside to avoid the bombing. Civilians took shelter from the air raider in underground stations. 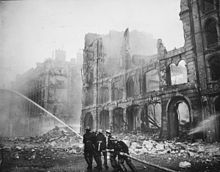 Firefighters putting out flames at a bomb site during the blitz

The heaviest bombing took place between 7 September 1940 and 10 May 1941. During this period, London was subjected to 71 separate raids, receiving over 18,000 tonnes of high explosive. Less intensive bombing followed over the following few years as Adolf Hitler concentrated on the Eastern front.

London suffered severe damage and heavy casualties, the worst hit part being the Docklands area. By the war's end, just under 30,000 Londoners had been killed by the bombing, and over 50,000 seriously injured, [1] tens of thousands of buildings were destroyed, and hundreds of thousands of people were made homeless.

During the war the original metal railing fences of London estates were melted down and manufactured into weaponry to serve the war effort. Following the war emergency stretchers used by Air Raid Protection Officers were up-cycled to become replacement fences for many estates in the south of London. These "stretcher railings" can still be seen today. They are made of two steel poles with wire mesh between them (for easy cleaning), and the poles bent to form handles. [2] [3]

Towards the end of the war, during 1944/45 London came under heavy attack again by pilotless V-1 and V-2 rockets, which were fired from Nazi occupied Europe.

The first V-1 was launched at London on 13 June 1944, [4] Seferis, the Greek poet and Nobel laureate, speaks in his diary about an air bombing of London the 18th of February. The attacks ended when the launching sites were captured in October. Approximately 10,000 were fired at England; 2,419 reached London, killing about 6,184 people and injuring 17,981. [5] The greatest density of hits was received by Croydon, on the south-east fringe of London.

Through the Double-Cross System the Germans were misled to think that those aimed at London were falling short, so moving attacks on London away from the more densely populated centre of London.

Museums and libraries sent important materials to safety in the countryside. Historic buildings were sandbagged and had special fire prevention crews. The Ministry of Information occupied London's Senate House. The University of London Library continued to function in the building, primarily to serve the Ministry. [7]

In September 1939, the national government put into effect its recently developed evacuation plans designed to remove most of the schoolchildren, plus teachers and caregivers, to safe towns and country districts. There was no bombing in 1939, and most of the evacuees soon returned. Council, the local government in charge, pushed hard for the evacuation in the face of doubts from the central government. [8]

Historian Amy Bell (2009) interprets private diaries, psychologists' notes, and fiction written by Londoners during the war "to reveal the hidden landscapes of fear in a city at war." They feared the loss of property, the loss of their homes of their friends, the destruction of the churches, and their own injury and death. Many saw London as a "potential canker in the heart of Imperial Britain," with British civilization highly vulnerable to internal weaknesses stemming from an "enemy within," specifically, the cowardice among those who remained in London during the war. The working classes, Jews, and children were thought to be particularly susceptible to this type of degeneracy.