United States District Court for the District of Nevada

The United States District Court for the District of Nevada (in case citations, D. Nev.) is the federal district court whose jurisdiction is the state of Nevada. The court has locations in Las Vegas and Reno.

Chief judges have administrative responsibilities with respect to their district court. Unlike the Supreme Court, where one justice is specifically nominated to be chief, the office of chief judge rotates among the district court judges. To be chief, a judge must have been in active service on the court for at least one year, be under the age of 65, and have not previously served as chief judge. A vacancy is filled by the judge highest in seniority among the group of qualified judges. The chief judge serves for a term of seven years or until age 70, whichever occurs first. The age restrictions are waived if no members of the court would otherwise be qualified for the position.

When the office was created in 1948, the chief judge was the longest-serving judge who had not elected to retire on what has since 1958 been known as senior status or declined to serve as chief judge. After August 6, 1959, judges could not become or remain chief after turning 70 years old. The current rules have been in operation since October 1, 1982. 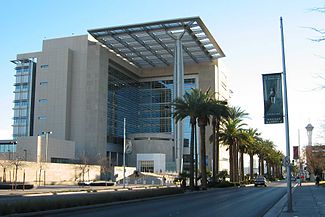 
Latitude and Longitude:
36°09′54″N 115°08′34″W﻿ / ﻿36.16510°N 115.14270°W﻿ / 36.16510; -115.14270 The Lloyd D. George Federal District Courthouse is the home for the district court in Las Vegas. The building of the courthouse was completed in 2002 and was the first federal building built to comply with the post- Oklahoma City blast resistance requirements. Blast-resistance tests for the project were conducted at the Department of Defense’s Large Blast Thermal Simulator in White Sands, New Mexico to validate building performance under blast loads. [1]

On January 4, 2010, a single gunman, identified as Johnny Lee Wicks, aged 66, went inside the lobby of the courthouse and opened fire, fatally wounding a security officer before being killed himself by return fire from other security officers and U.S. Marshals. Senators Harry Reid and John Ensign, both of whom had offices in the courthouse building, were not present when this happened. Wicks was apparently angry over the outcome of a legal dispute over his Social Security benefits. [2] [3]