Little Rock is the capital and most populous city of the U.S. state of Arkansas. As the county seat of Pulaski County, the city was incorporated on November 7, 1831, on the south bank of the Arkansas River close to the state's geographic center. The city derived its name from a rock formation along the river, named the "Little Rock" ( French: La Petite Roche) by the French explorer Jean-Baptiste Bénard de la Harpe in the 1720s. The capital of the Arkansas Territory was moved to Little Rock from Arkansas Post in 1821. The city's population was 197,312 in 2019 according to the United States Census Bureau. The six-county Little Rock-North Little Rock-Conway, AR Metropolitan Statistical Area (MSA) is ranked 78th in terms of population in the United States with 738,344 residents according to the 2017 estimate by the United States Census Bureau. [3] [4]

Little Rock is a cultural, economic, government, and transportation center within Arkansas and the South. Several cultural institutions are in Little Rock, such as the Arkansas Museum of Fine Arts, the Arkansas Repertory Theatre, and the Arkansas Symphony Orchestra, in addition to hiking, boating, and other outdoor recreational opportunities. Little Rock's history is available through history museums, historic districts or neighborhoods like the Quapaw Quarter, and historic sites such as Little Rock Central High School. The city is the headquarters of Dillard's, Windstream Communications, Acxiom, Stephens Inc., University of Arkansas for Medical Sciences, Heifer International, Winrock International, the Clinton Foundation, and the Rose Law Firm. Other corporations, such as Amazon, Dassault Falcon Jet, LM Wind Power, Simmons Bank, Euronet Worldwide, AT&T, and Entergy have large operations in the city. State government is a large employer, with many offices downtown. Two major Interstate highways, Interstate 30 and Interstate 40, meet in Little Rock, with the Port of Little Rock serving as a shipping hub.

Little Rock derives its name from a small rock formation on the south bank of the Arkansas River called the "Little Rock" (French: La Petite Roche). The Little Rock was used by early river traffic as a landmark and became a well-known river crossing. The Little Rock is across the river from The Big Rock, a large bluff at the edge of the river, which was once used as a rock quarry. [5]

Archeological artifacts provide evidence of Native Americans inhabiting Central Arkansas for thousands of years before Europeans arrived. The early inhabitants may have been the Folsom people, Bluff Dwellers, and Mississippian culture peoples who built earthwork mounds recorded in 1541 by Spanish explorer Hernando de Soto. Historical tribes of the area were the Caddo, Quapaw, Osage, Choctaw, and Cherokee.

Little Rock was named for a stone outcropping on the bank of the Arkansas River used by early travelers as a landmark. [6] It was named in 1722 by French explorer and trader Jean-Baptiste Bénard de la Harpe, marked the transition from the flat Mississippi Delta region to the Ouachita Mountain foothills. Travelers referred to the area as the "Little Rock". Though there was an effort to officially name the city "Arkopolis" upon its founding in the 1820s, and that name did appear on a few maps made by the US Geological Survey, the name Little Rock is eventually what stuck. [7] [8] [9]

The skyline of Little Rock, viewed from the north bank of the Arkansas River 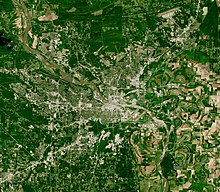 Satellite photo of Little Rock in 2020

Little Rock is on the south bank of the Arkansas River in Central Arkansas. Fourche Creek and Rock Creek run through the city, and flow into the river. The western part of the city is in the foothills of the Ouachita Mountains. Northwest of the city limits are Pinnacle Mountain and Lake Maumelle, which provides Little Rock's drinking water.

Hillary Rodham and Bill Clinton lived in this 980 square foot (91 m2) house in the Hillcrest neighborhood of Little Rock from 1977 to 1979 while he was Arkansas Attorney General. [12] 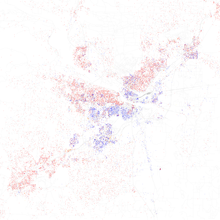 Map of racial distribution in Little Rock, 2010 U.S. Census. Each dot is 25 people: White, Black, Asian, Hispanic or Other (yellow)

Large companies headquartered in other cities but with a large presence in Little Rock are Dassault Falcon Jet near Little Rock National Airport in the eastern part of the city, Fidelity National Information Services in northwestern Little Rock, and Welspun Corp in Southeast Little Rock.

Little Rock and its surroundings are the headquarters for some of the world's largest nonprofit organizations, such as Winrock International, Heifer International, the Association of Community Organizations for Reform Now, Clinton Foundation, Lions World Services for the Blind, Clinton Presidential Center, Winthrop Rockefeller Foundation, FamilyLife, Audubon Arkansas, and The Nature Conservancy.

One of the largest public employers in the state with over 10,552 employees, the University of Arkansas for Medical Sciences (UAMS) and its healthcare partners— Arkansas Children's Hospital and the Central Arkansas Veterans Healthcare System—have a total economic impact in Arkansas of about $5 billion per year. UAMS receives less than 11% of its funding from the state. Its operation is funded by payments for clinical services (64%), grants and contracts (18%), philanthropy and other (5%), and tuition and fees (2%).

The Little Rock port is an intermodal river port with a large industrial business complex. It is designated as Foreign Trade Zone 14. International corporations such as Danish manufacturer LM Glasfiber have established new facilities adjacent to the port.

Along with Louisville and Memphis, Little Rock has a branch of the Federal Reserve Bank of St. Louis. [23]

Cultural sites in Little Rock include the following. 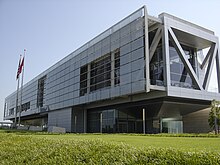 Founded in 1976, the Arkansas Repertory Theatre is the state's largest nonprofit professional theatre company. A member of the League of Resident Theatres (LORT D), The Rep has produced more than 300 productions, such as 40 world premieres, in its building in downtown Little Rock. Producing Artistic Director John Miller-Stephany leads a resident staff of designers, technicians and administrators in eight to ten productions for an annual audience in excess of 70,000 for MainStage productions, educational programming and touring. The Rep produces works from contemporary comedies and dramas to world premiers and the classics of dramatic literature.

Outside magazine named Little Rock one of its 2019 Best Places to Live. [25] Dozens of parks such as Pinnacle Mountain State Park are in Little Rock. 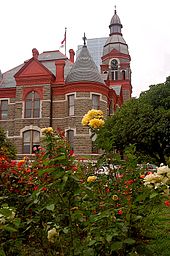 The Pulaski County Courthouse is in Little Rock

The city has operated under the city manager form of government since November 1957. In 1993, voters approved changes from seven at-large city directors (who rated the position of mayor among themselves) to a popularly elected mayor, seven ward directors and three at-large directors. The position of mayor remained a part-time position until August 2007. At that point, voters approved making the mayor's position a full-time position with veto power, while a vice mayor is selected by and among members of the city board. The current mayor, elected in November 2018, is Frank Scott Jr., a former assistant bank executive, pastor and state highway commissioner. The city manager is Bruce T. Moore, the longest-serving city manager in Little Rock history. [26] The city employs over 2,500 people in 14 different departments, including the police department, the fire department, parks and recreation, and the zoo.

Most Pulaski County government offices are in Little Rock, including the Quorum, Circuit, District, and Juvenile Courts; and the Assessor, County Judge, County Attorney, and Public Defender's offices.

Located in downtown is the Clinton School of Public Service, a branch of the University of Arkansas System, which offers master's degrees in public service. 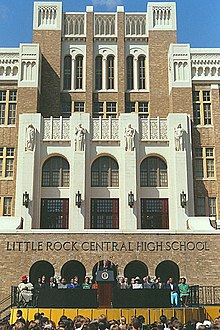 The Pulaski County Special School District (PCSSD) serves parts of Little Rock. PCSSD high schools are in the city such as:

Various private schools are in Little Rock, such as:

The Central Arkansas Library System comprises the main building downtown and numerous branches throughout the city, Jacksonville, Maumelle, Perryville, Sherwood and Wrightsville. The Pulaski County Law Library is at the William H. Bowen School of Law. 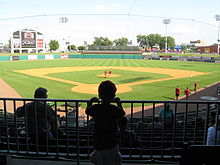 Little Rock is home to the Arkansas Travelers. They are the AA professional Minor League Baseball affiliate of the Seattle Mariners in the Texas League. The Travelers played their last game in Little Rock at Ray Winder Field on September 3, 2006, and moved into Dickey-Stephens Park in nearby North Little Rock in April 2007.

The Little Rock Rangers soccer club of the National Premier Soccer League played their inaugural seasons in 2016 & 2017 for the men's and women's teams respectively. Home games are played at War Memorial Stadium.

Little Rock was also home to the Arkansas Twisters (later Arkansas Diamonds) of Arena Football 2 and Indoor Football League and the Arkansas RimRockers of the American Basketball Association and NBA Development League. Both of these teams played at Verizon Arena in North Little Rock.

The city is also home to the Little Rock Trojans, the athletic program of the University of Arkansas at Little Rock. The majority of the school's athletic teams are housed in the Jack Stephens Center, which opened in 2005. The Trojans play in the Sun Belt Conference, where the Arkansas State Red Wolves are their chief rival.

Little Rock's War Memorial Stadium hosts at least one University of Arkansas Razorback football game each year. The stadium is known for being in the middle of a golf course. Each fall, the city closes the golf course on Razorback football weekends to allow the estimated 80,000 people who attend take part in tailgating activities. War Memorial also hosts the Arkansas High School football state championships, and starting in the fall of 2006 hosts one game apiece for the University of Central Arkansas and the University of Arkansas at Pine Bluff. Arkansas State University also plays at the stadium from time to time.

Little Rock is home to the Grande Maumelle Sailing Club. Established in 1959, the club hosts multiple regattas during the year on both Lake Maumelle and the Arkansas River.

Little Rock is also home to the Little Rock Marathon, held on the first Saturday of March every year since 2003. The marathon features the world's largest medal given to marathon participants.

The Arkansas Democrat Gazette is the largest newspaper in the city, as well as the state. As of March 31, 2006, Sunday circulation is 275,991 copies, while daily (Monday-Saturday) circulation is 180,662, according to the Audit Bureau of Circulations. The monthly magazine Arkansas Life, part of the newspaper's niche publications division, began publication in September 2008. From 2007 to 2015, the newspaper also published the free tabloid Sync Weekly. Beginning in 2020, the ADG ceased weekday publication of the newspaper and moved to an exclusive online version. The only physical newspaper the Democrat-Gazette now publishes is a Sunday edition. [30]

In addition to area newspapers, the Little Rock market is served by a variety of magazines covering diverse interests. The publications are:

Many television networks have local affiliates in Little Rock, in addition to numerous independent stations. As for cable TV services, Comcast has a monopoly over Little Rock and much of Pulaski County. Some suburbs have the option of having Comcast, Charter or other cable companies.

Television stations in the Little Rock area include:

Hospitals in Little Rock include: 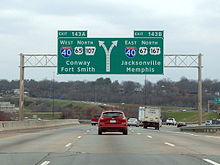 I-30 terminates at I-40 in North Little Rock

Two primary Interstate Highways and four auxiliary Interstates serve Little Rock. Interstate 40 (I-40) passes through North Little Rock to the north, and I-30 enters the city from the south, ending at I-40 in the north of the Arkansas River. Shorter routes designed to accommodate the flow of urban traffic across town include I-430, which bypasses the city to the west, I-440, which serves the eastern part of Little Rock including Clinton National Airport, and I-630 which runs east–west through the city, connecting west Little Rock with the central business district. I-530 runs southeast to Pine Bluff as a spur route. [31] 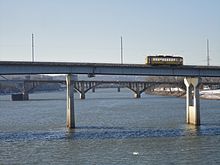 According to the 2016 American Community Survey, 82.9 percent of working Little Rock residents commuted by driving alone, 8.9 percent carpooled, 1.1 percent used public transportation, and 1.8 percent walked. About 1.3 percent commuted by all other means of transportation, including taxi, bicycle, and motorcycle. About 4 percent worked out of the home. [32]

This list is incomplete; you can help by adding missing items with reliable sources.
See also: List of people from Little Rock