Since 1886, those who have made significant achievements, heads of state, returning veterans and sport champions from the New York area or national teams have been honored with ticker-tape parades. Parades are traditionally held along a section of Broadway, known as the " Canyon of Heroes," from the Battery to City Hall. Each of these 206 parades has been commemorated by the Alliance for Downtown New York City with a granite strip, installed in 2004. [1] 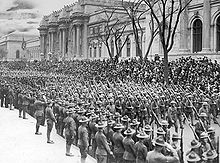 Dwight Eisenhower waves to crowd in 1945 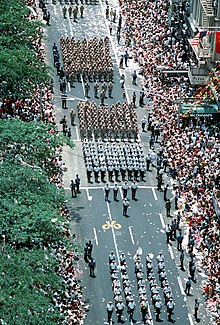 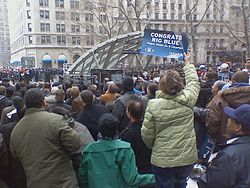 USWNT at a parade in their honor after the 2019 Championship

In 2017, New York Mayor Bill de Blasio announced on Twitter that he intends to have Marshall Pétain's plaque removed from the Canyon of Heroes. [8] [9] This happened after a national debate over the propriety of Confederate monuments spilled over into a reassessment of monuments in general. Pétain was honored in 1931 for his service in World War I. After France's defeat by Germany, he advocated surrender rather than resistance; Pétain headed the Nazi collaborationist government of Vichy France from 1940–1944. France itself has largely removed all commemoration for Pétain; the last street named after him was renamed in 2010. [10]