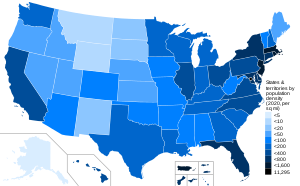 The population density of the United States is lower than that of many other countries because of the United States' large land area. There are large, sparsely populated areas in parts of the US, like the east-to-west stretch extending from the outskirts of Seattle all the way to Minneapolis, or the north-to-south portion from Tacoma to San Francisco (excluding the presence of the cities of Portland and Spokane). For comparison, the population density of the U.S. is 1/15 that of South Korea and 1/12 that of India and the Netherlands. On the other hand, it is over 8 times higher than that of Canada and over 9 times higher than that of Australia. [3]

New Jersey is the most densely populated state.

New York is home to the most populous city in the country, and ranks 7th among the states in density.

Despite a small population, Vermont has fairly average population density because of its small area. 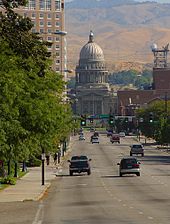 Idaho's population has increased rapidly in recent decades, but its population density is lower than other states.

About half of the population of Alaska lives in the Anchorage metropolitan area.

Puerto Rico is the fourth most densely populated of states and possessions of the U.S.