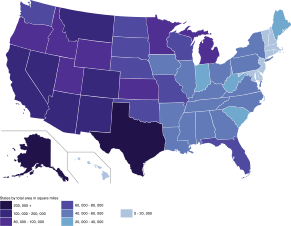 States by area (Note: Alaska is depicted at a smaller scale in the inset.)

This is a complete list of the U.S. states, its federal district and its major territories ordered by total area, land area and water area. The water area includes inland waters, coastal waters, the Great Lakes and territorial waters. Glaciers and intermittent bodies of water are counted as land area. [1] Alaska accounts for 17.53% of the total area; Texas for 7.07%; only six states account for 3% or more of the total area and only 17 for more than 2%.