From Wikipedia, the free encyclopedia
Business district of Istanbul
Not to be confused with the Levant in the Eastern Mediterranean.
For people with the name, see Levent (name).

A distant view of Levent's skyline from the Bosphorus strait in Istanbul. 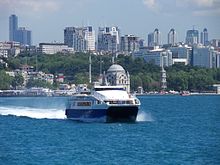 A catamaran Seabus on the Bosphorus, with the skyline of Levent in the background. Istanbul Sapphire is the first tower at left.

Levent is a neighbourhood and one of the main business districts of Istanbul, Turkey, located on the European side of the city. It is a part of the municipality of Beşiktaş and is situated to the north of the Golden Horn, at the western shore of the Bosphorus strait.

Levent, together with nearby Maslak, is one of the main business districts on the European side of the city, where numerous skyscraper projects are currently under construction or in the planning phase. One of the modern skyline clusters of the city is located here, hidden behind the hills of the Bosphorus and not disturbing the atmosphere of the historical peninsula of Istanbul, which is at quite a distance.

The stations Levent and 4. Levent along the M2 line of the Istanbul Metro serve the Levent business district and its surrounding neighbourhoods. 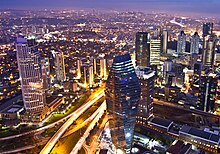 View of Büyükdere Avenue in Levent at night, from the observation deck of Istanbul Sapphire.

Levent is also a name for men in Turkey (cf. Levent) that derives from the Levend, a type of soldier ( naval infantry) of the Ottoman Navy. [9] Levend itself has derived from Levantino ( Levantine) which means Person from the Levant (East Mediterranean) in Italian. [9] [10] This was how the Italians (the Genoese and Venetians) used to call the Ottoman sailors, a name which was also adopted by the Ottoman Turks. [9] [10] [11] The use of the word levend for describing seamen first appeared in the Ottoman Turkish language during the 16th century. [11] These marine soldiers had the reputation of possessing strong, muscular physiques and daring, fearless characters; which is the reason why the Turkish word levent, its Greek cognate levénti (λεβέντη) and its Bulgarian cognate levént (левент) are still popularly used for defining "athletic, gallant, brave" men. [10]

The name Levent (Levend) came to be applied to the neighbourhood because in 1780 the Ottoman Fleet Admiral Cezayirli Gazi Hasan Pasha was awarded a farmland here by the Ottoman Sultan Abdülhamid I; and in the early 19th century a military compound was built in the area of this farm. [12] The nearby İstinye neighbourhood on the European shoreline of the Bosphorus also featured an important shipyard and dock for maintaining and repairing the military vessels of the Ottoman Navy. However, the Imperial Arsenal (Tersâne-i Âmire) and the Naval Ministry (Bahriye Nezareti) of the Ottoman Navy were located on the shores of the Golden Horn. 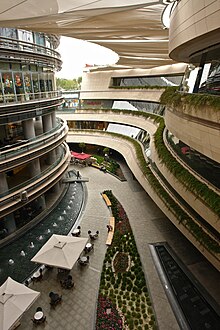 Heading towards Levent through the Bosphorus Bridge (1973), the oldest of three suspension bridges and two tunnels which connect Istanbul's Asian and European sides.

In the early 19th century, during the final years of the reign of Sultan Selim III, the first military compound of the Nizam-ı Cedid (New Order) Army was built in Levent, which was then known as the Levend Çiftliği (Levend Farmlands), eventually becoming known as the Levend Kışlası (Levend Barracks).

The modern neighbourhood of Levent was formed in 1947, when Emlak Kredi Bankası (a Turkish bank which was established to finance housing projects) chose the Levent area for constructing a well-planned residential compound, formed mostly of villa type houses with gardens. After the completion of the first phase of the Levent project in 1960, numerous other residential compounds were constructed in the area, eventually extending towards nearby Etiler.

Starting from the late 1980s and early 1990s, with initial projects such as the Sabancı Center, Yapı Kredi Towers, TAT Towers, Metrocity Towers and İş Bankası Towers, Levent became a popular location for constructing new skyscrapers, mostly owned by Turkish banks and conglomerates. One of the city's major skyline clusters (together with those of Maslak and Şişli on the European side; and Ataşehir and Kozyatağı on the Asian side of Istanbul) is located in Levent. At present, Levent hosts the tallest skyscraper of Istanbul and Turkey, the 54-floor Istanbul Sapphire; while the construction of numerous new mixed-use skyscraper projects and shopping malls are ongoing in the neighbourhood, which has evolved into a central business district.