From Wikipedia, the free encyclopedia
Building complex in Paris, France
This article is about the area in Paris. For the Paris metro station serving it, see Invalides (Paris Métro and RER).

The Hôtel des Invalides (English: "house of invalids"), commonly called Les Invalides (French pronunciation: ​ [lezɛ̃valid]), is a complex of buildings in the 7th arrondissement of Paris, France, containing museums and monuments, all relating to the military history of France, as well as a hospital and a retirement home for war veterans, the building's original purpose. The buildings house the Musée de l'Armée, the military museum of the Army of France, the Musée des Plans-Reliefs, and the Musée d'Histoire Contemporaine. The complex also includes the former hospital chapel, now national cathedral of the French military, and the adjacent former Royal Chapel known as the Dôme des Invalides, the tallest church building in Paris at a height of 107 meters. [1] The latter has been converted into a shrine of some of France's leading military figures, most notably the tomb of Napoleon. [2] 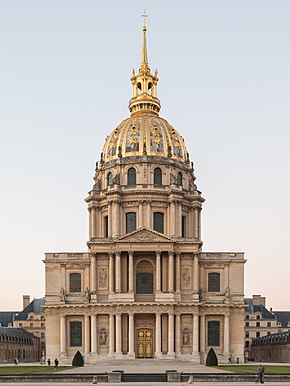 Louis XIV initiated the project by an order dated 24 November 1670, as a home and hospital for aged and disabled (invalide) soldiers. [3] The initial architect of Les Invalides was Libéral Bruant. The selected site was in the then suburban plain of Grenelle (plaine de Grenelle). By the time the enlarged project was completed in 1676, the façade fronting the Seine measured 196 metres (643 ft) in width, and the complex had fifteen courtyards, the largest being the cour d'honneur designed for military parades.

The church-and-chapel complex of the Invalides was designed by Jules Hardouin-Mansart from 1676, taking inspiration from his great-uncle François Mansart's design for a Chapelle des Bourbons [ fr] to be built behind the chancel of the Basilica of Saint-Denis, the French monarch's necropolis since ancient times. Several projects were submitted in the mid-1660s by both Mansart and Gian Lorenzo Bernini who was residing in Paris at the time. Mansart's second project is very close to Hardouin-Mansart's concept of the Royal Chapel or Dome Church at Les Invalides, both in terms of its architecture and of its relationship with the adjacent church. Architectural historian Allan Braham has hypothesized that the domed chapel was initially intended to be a new burial place for the Bourbon Dynasty, but that project was not implemented. [4] Instead, the massive building was designated as private chapel of the monarch, from which he could attend church service without having to mingle with the disabled veterans. It was barely used for that purpose. The Dôme des Invalides remains as one of the prime exemplars of French Baroque architecture, at 107 metres (351 ft) high, and also as an iconic symbol of France's absolute monarchy.

The interior of the dome was painted by Le Brun's disciple Charles de La Fosse with a Baroque illusionistic ceiling painting. The painting was completed in 1705. [5]

Meanwhile, Hardouin-Mansart assisted the aged Bruant on the chapel, which was finished to Bruant's design after the latter's death in 1697. This chapel is known as the church of Saint-Louis-des-Invalides. Daily attendance of the veterans in the church services was required. Shortly after the veterans' chapel was started, Louis XIV commissioned Mansart to construct a separate private royal chapel, now known as the Église du Dôme from its most striking feature. The Dome chapel was finished in 1706.

Because of its location and significance, the Invalides served as the scene for several key events in French history. On 14 July 1789 it was stormed by Parisian rioters who seized the cannons and muskets stored in its cellars to use against the Bastille later the same day. Napoleon was entombed under the Dome of the Invalides with great ceremony in 1840.

The building retained its primary function of a retirement home and hospital for military veterans (invalides) until the early twentieth century. In 1872 the musée d'artillerie (Artillery Museum) was located within the building to be joined by the musée historique des armées (Historical Museum of the Armies) in 1896. The two institutions were merged to form the present musée de l'armée in 1905. At the same time the veterans in residence were dispersed to smaller centres outside Paris. The reason was that the adoption of a mainly conscript army, after 1872, meant a substantial reduction in the numbers of veterans having the twenty or more years of military service formerly required to enter the Hôpital des Invalides. The building accordingly became too large for its original purpose. The modern complex does however still include the facilities detailed below for about a hundred elderly or incapacitated former soldiers.

When the Army Museum at Les Invalides was founded in 1905, the veterans' chapel was placed under its administrative control. It is now the cathedral of the Diocese of the French Armed Forces, officially known as Cathédrale Saint-Louis-des-Invalides. [6]

The north front of the Invalides: Hardouin-Mansart's Dome above Bruant's pedimented central block

On the north front of Les Invalides, Hardouin-Mansart's Dome chapel is large enough to dominate the long façade, yet harmonizes with Bruant's door under an arched pediment. To the north, the courtyard (cour d'honneur) is extended by a wide public esplanade (Esplanade des Invalides) where the embassies of Austria and Finland are neighbors of the French Ministry of Foreign Affairs, all forming one of the grand open spaces in the heart of Paris. At its far end, the Pont Alexandre III links this grand urbanistic axis with the Petit Palais and the Grand Palais. The Pont des Invalides is next, downstream the Seine river.

The sarcophagus of Napoleon Bonaparte 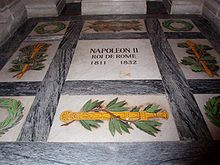 The Dome chapel became a military necropolis when Napoleon in September 1800 designated it for the relocation of the tomb of Louis XIV's celebrated general Turenne, followed in 1807–1808 by Vauban. [2] In 1835, the underground gallery below the church received the remains of 14 victims of the Giuseppe Marco Fieschi's failed assassination attempt on Louis-Philippe I. The major development came with the building's designation to become Napoleon's tomb by a law of 10 June 1840, as part of the political project of the retour des cendres orchestrated by king Louis-Philippe I and his minister Adolphe Thiers (the reference to Napoleon's cendres or "ashes" is actually to his mortal remains, as he had not been cremated). [8] The creation of the crypt and of Napoleon's massive sarcophagus took twenty years to complete and was finished in 1861. [9] [10] By then, it was emperor Napoleon III who was in power and oversaw the ceremony of the transfer of his remains from a chapel of the church to the crypt beneath the dome. [11]

Inside the Dome church

The most notable tomb at Les Invalides is that of Napoleon Bonaparte (1769–1821), designed by Louis Visconti with sculptures by James Pradier, Pierre-Charles Simart and Francisque Joseph Duret. Napoleon was initially interred on Saint Helena, but King Louis Philippe arranged for his remains to be brought to France in 1840, an event known as le retour des cendres. Napoléon's remains were kept in the Saint Jerome (southwestern) chapel of the Dome church for more than two decades until his final resting place, a tomb made of red quartzite and resting on a green granite base, was finished in 1861.

Other military figures and members of Napoleon's family also buried at the Dome church, by year of burial there: [2]

Under the Cathedral church

82 additional military figures, including 28 Governors of Les Invalides, are in the underground gallery known as the Caveau des Gouverneurs beneath the Saint-Louis Cathedral: [12]

Two of these, Gabriel Malleterre and Philippe Leclerc de Hauteclocque, are also honored with a plaque inside the Saint-Louis-des-Invalides cathedral. Another plaque honors Jean de Lattre de Tassigny (1889–1952), posthumous Marshal of France, commander of the French First Army during World War II and later commander in the First Indochina War, who is buried in Mouilleron-en-Pareds.