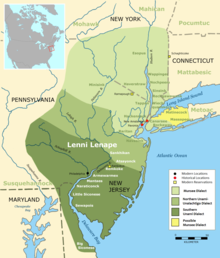 Map of Lenapehoking (also showing approximate boundaries of languages spoken), including all of present day New Jersey, most of eastern Pennsylvania, and southern New York

Lenapehoking ( Unami: Lënapehòkink [1]) is widely translated as ' homelands of the Lenape', which in the 16th and 17th centuries, ranged along the Eastern seaboard from western Connecticut to Delaware, and encompassed the territory adjacent to the Delaware and lower Hudson river valleys, as well as the territory between them.

Beginning in the 17th century, European colonists started settling on traditional Lenape lands. Combined with the concurrent introduction of Eurasian infectious diseases and encroachment from the colonists, the Lenape were severely depopulated and lost control over large portions of Lenapehoking. In the 18th and 19th centuries, the United States government forcibly removed the Lenape to the American Midwest, including the state of Oklahoma. [2]

Lenape speakers in Oklahoma called their northeastern homelands Lenapehoking translating to 'in the land of the Lenape.' It was popularized when Nora Thompson Dean shared the term with Theodore Cornu in 1970, and later with Herbert C. Kraft. [3] This term has gained widespread acceptance and is found widely in recent literature on the Lenape and in New York institutions today.

Another historical Lenape term for much of the same region is Scheyischbi or Scheyichbi, although this is also often cited as referring specifically to New Jersey.

At the time of the arrival of the Europeans in the 16th and 17th centuries, the Lenape homeland ranged along the Atlantic's coast from western Connecticut to Delaware, which generally encompassed the territory adjacent to the Delaware and lower Hudson river valleys, as well the hill-and- ridge dominated territory between them. Relatives of the Algonquian Amerindians whose territories ranged along the entire coast from beyond the Saint Lawrence River in today's Canada, and the tribes throughout all of New England, [2] down into northern South Carolina, [2] the Delaware Confederation [a] stretched from the southern shores of modern-day Delaware along the Atlantic seaboard into western Long Island and Connecticut, then extended westwards across the Hudson water gap into the eastern Catskills part of the Appalachians range around the headwaters of the Delaware River and along both banks of its basin down to the mouth of the Lehigh River.

Inland, the tribe had to deal with the fierce and territorial Susquehannocks; the Delawares' territory has generally been plotted with boundaries [b] along mountain ridges [c] topped by the drainage divides between the right bank tributaries of the Delaware River on the east—and on the west and south—the left bank tributaries of the Susquehanna and Lehigh Rivers; bounds which included the Catskills, northern parts of eastern Pennsylvania down through the entire Poconos along the left bank of the Lehigh River. The Schuylkill River and its mouth (future Philadelphia area counties) or right bank Lehigh was contested hunting grounds, generally shared with the Susquehannock and the occasional visit by a related Potomac tribe when there wasn't active tribal warfare. The greater Philadelphia area was known to host European to Indian contacts from the Dutch traders contacts with the Susquehanna (1600), English traders (1602), and both tribes with New Netherlands traders after 1610

Along the left bank Delaware valley, the territory extended to all of present-day New Jersey, and the southern counties of New York State, including Rockland, Orange, Westchester, and Putnam Counties, Nassau County, and the five boroughs of New York City. [d]

Numerous Indigenous peoples from diverse tribes, both from the region historically and from elsewhere, live in the Northeast Corridor or Eastern Seaboard. Many of people from the Haudenosaunee Confederacy moved into the area in the 1920s to 1960s and were employed as skyscraper construction workers (many belonged to the Mohawk Tribe) and played an important role in building the skyline of Philadelphia and New York City. In the University City section of West Philadelphia, there has been some political activity by Urban Indian residents of the area, who adapted the namesake Lenapehoking to where they live.

Lenape place names are used throughout the region. The following are merely examples and the list is by no means exhaustive. 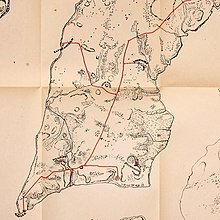