Lake of the Ozarks

From Wikipedia, the free encyclopedia
Reservoir in Missouri, United States
Body of water

Lake of the Ozarks is a reservoir created by impounding the Osage River in the northern part of the Ozarks in central Missouri. Parts of three smaller tributaries to the Osage are included in the impoundment: the Niangua River, Grandglaize Creek, and Gravois Creek. The lake has a surface area of 54,000 acres (220 km2) and 1,150 miles (1,850 km) of shoreline. The main channel of the Osage Arm stretches 92 miles (148 km) from one end to the other. The total drainage area is over 14,000 square miles (36,000 km2). The lake's serpentine shape has earned it the nickname "The Missouri Dragon", which has in turn inspired the names of local institutions such as The Magic Dragon Street Meet. [5] 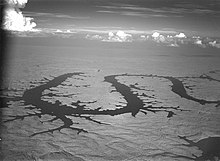 1945 aerial of Lake of the Ozarks, "The Missouri Dragon"

A hydroelectric power plant on the Osage River was first pursued by Kansas City developer Ralph Street in 1912. He put together the initial funding and began building roads, railroads, and infrastructure necessary to begin construction of a dam, with a plan to impound a much smaller lake. In the mid-1920s, Street's funding dried up, and he abandoned the effort. [6]

The lake was created by the construction of the 2,543-foot (775 m) long Bagnell Dam by the Union Electric Company of St. Louis, Missouri. The principal engineering firm was Stone and Webster. Construction began August 8, 1929, and was completed in April 1931; the lake reached spillway elevation on May 20, 1931.

During construction, the lake was referred to as Osage Reservoir or Lake Osage. The Missouri General Assembly officially named it Lake Benton after Senator Thomas Hart Benton. None of the names stuck, as it was popularly referred to by its location at the northern edge of the Ozarks. The electric generating station, however, is still referred to by the utility company as the "Osage Hydroelectric Plant." [7]

While some sources indicate that more than 20 towns, villages and settlements were permanently flooded to create the lake, research indicates that the actual number was closer to eight. Several other settlements had been previously abandoned, were relocated to make way for the lake, or were on high enough ground that the creation of the lake did not affect them. [8]

At the time of construction, Lake of the Ozarks was the largest man-made lake in the United States and one of the largest in the world. It was created to provide hydroelectric power for customers of Union Electric, but it quickly became a significant tourist destination. Most of its shoreline is privately owned, unlike many flood-control lakes in the region that were constructed by the U.S. Army Corps of Engineers. The relatively stable surface elevation has created conditions suitable for private development within a few feet of the shoreline. There are over 70,000 homes along the lake, many of which are vacation homes. The lake is now a major resort area, and more than 5 million people visit annually.[ citation needed]

In 2011, the Federal Energy Regulatory Commission (FERC) renewed the lease for the power plant operated by Ameren Missouri. In the process, FERC determined that numerous homes and structures were encroaching on utility land in violation of federal regulations. According to the Boston Globe, this issue "has triggered panic in the area's lakefront communities and led to a growing battle among regulators, a utility company, land attorneys, and the state's congressional delegation." [9]

In 2012, a sign that imitates the Hollywood Sign was placed that can be seen from westbound US 54. It is located at the US 54 and Route 242 junction.

In 2015, FERC issued an order allowing Ameren Missouri to pursue permits for approximately 215 structures that were termed as "non-conforming." Those were the structures remaining in limbo after Ameren was given approval to redraw the project lines encompassing Lake of the Ozarks. [10]

The Lake of the Ozarks froze over during the February 2021 North American cold wave. [11]

The Lake of the Ozarks is located within the Ozark Mountains with Bagnell Dam lying at an elevation of 659 feet (201 m). [4] [12] It lies in central Missouri on the Salem Plateau of the Ozarks. [13] The lake extends across four Missouri counties, from Benton County in the west through Camden and Morgan counties to Miller County in the east. [14]

The reservoir is impounded at its northeastern end by Bagnell Dam, and the Osage River is both its primary inflow and outflow. [14] Long and winding in shape, the lake consists of the main, 93-mile-long (150 km) Osage River channel as well as several arms, each fed by a different tributary. [1] [14] The southwestern arm is fed by the Niangua and Little Niangua rivers, [15] the southeastern arm by Grandglaize Creek, [16] and the northern arm by several streams including Gravois, Indian, and Little Gravois creeks. [17] Many smaller tributaries also drain into the lake, creating numerous small coves and indentations in its shore. [15] [16] [17] As a result, the lake has approximately 1,150 miles (1,850 km) of shoreline. [2]

U.S. Route 54 runs east–west across the reservoir's southwestern arm and then generally northeast–southwest along its eastern shoreline, crossing the southeastern arm at Osage Beach and crosses the Grand Glaize Bridge. Missouri Route 5 runs generally north–south along the lake's western shoreline, crossing the main channel at Hurricane Deck. Missouri Route 7 runs generally northwest–southeast to the lake's southwest, crossing the southwestern arm. Missouri Route 134 runs southeast from U.S. 54 north of Osage Beach to its southern terminus in Lake of the Ozarks State Park. Route 42 connects to Route 134 and US 54 in Osage Beach. Route 242 connects US 54 to near Village of Four Seasons. In addition, a network of supplemental state routes provides access to various points along the lake shore. [14]

Numerous settlements are located near or on the Lake of the Ozarks. With a population of 4,570, the largest city is Osage Beach which sits where the lake's southeastern arm joins the main channel. The second largest is the city of Camdenton, located a few miles east of the southwestern arm. Lake Ozark lies immediately north of Osage Beach and just south of Bagnell Dam. Other, smaller communities along or near the lake include (from east to west): Kaiser, Lakeside, Linn Creek, Village of Four Seasons, Rocky Mount, Sunrise Beach, Hurricane Deck, Gravois Mills, Laurie, and Lakeview Heights. [14]

Due to its large volume and surface area, various sources identify the Lake of the Ozarks as either the largest reservoir in Missouri or the second-largest after Truman Reservoir. [19] [20] [21] 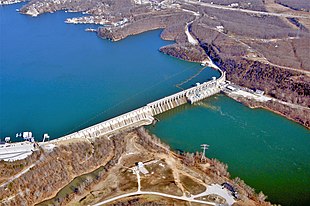 Bridges on the lake include the following:

Grand Glaize Bridge - Originally built in 1930. In 1984, a new girder bridge carrying westbound traffic opened. In 1995, a new eastbound girder bridge was built and the original bridge was torn down.

Bagnell Dam is operated and maintained by Ameren Missouri, the successor of Union Electric, under the authority of a permit issued by the Federal Energy Regulatory Commission. Ameren Missouri is also responsible for managing both the shoreline and water levels of the lake. All land surrounding the lake that is within the project boundary defined by the FERC is under the company's jurisdiction. Any improvements to the shoreline including docks, seawalls, and other structures require permission from Ameren Missouri prior to construction. [23] 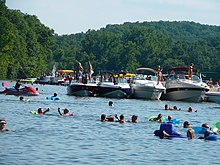 During the process of land acquisition for the lake during the 1920s, 17,500 acres (71 km2) of land were set aside for a national park along the Grand Glaize Arm of the lake. In 1946, this land was acquired by the State of Missouri for Lake of the Ozarks State Park, the largest State Park in Missouri. Another state park on the shores of the lake is Ha Ha Tonka State Park on the Niangua Arm of the lake.

Lake of the Ozarks State Park is home to Party Cove, a gathering spot that a New York Times writer called the "oldest established permanent floating bacchanal in the country." [24] The Missouri State Water Patrol has estimated that the cove attracts up to 3,000 boats during the Fourth of July weekend. [24]

On April 1st 2012, Biologist and Tv Personality Jeremy Wade visited The lake and filmed an episode on the large catfish that could be caught there.

AquaPolooza takes place each July. Attendees gather on rafts and inflatable tubes. Live music is usually played from noon to 5pm as boaters link up their boats to one another.[ citation needed]

At the end of every summer, the Lake of the Ozarks holds an event called "The Shootout". It is the biggest powerboat racing event of the year at the lake and runs over a three-mile course.

On the last Saturday of February of every year, the Lake of the Ozarks holds a Polar bear plunge event. The event is a fundraiser for Special Olympics in Missouri.

The TV series Ozark is set in Osage Beach though filmed in the state of Georgia. In November 2017, it was reported that the series helped increase tourism and notoriety of the Lake of the Ozarks, but did not have a significant economic impact. [27] In February 2018, a real life restaurant called "Marty Byrde's", inspired by the series, was opened in Lake Ozark, Missouri, and includes menu items based on the show, including "Ruth's Smoked Wings". [28]

Wikimedia Commons has media related to Lake of the Ozarks.
Retrieved from " https://en.wikipedia.org/?title=Lake_of_the_Ozarks&oldid=1111561310"
Categories:
Hidden categories: