Lake Mead is a reservoir formed by the Hoover Dam on the Colorado River in the Southwestern United States. It is located in the states of Nevada and Arizona, 24 mi (39 km) east from Las Vegas Strip. It is the largest reservoir in the United States in terms of water capacity. Formed by the Hoover Dam on September 30, 1935, the reservoir serves water to the states of Arizona, California, and Nevada, as well as some of Mexico, providing sustenance to nearly 20 million people and large areas of farmland. [1] 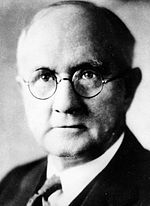 The lake was named after Elwood Mead, [7] who was the commissioner of the U.S. Bureau of Reclamation from 1924 to 1936, during the planning and construction of the Boulder Canyon Project that created the dam and lake. Lloyd Joseph Hudlow, an engineer with the Bureau of Reclamation, came to Boulder City in March 1933 to assist in the survey, and ended up as the Project manager. [8]

Lake Mead was established as the Boulder Dam Recreation Area in 1936 administered by the National Park Service. [9] The name was changed to the Lake Mead National Recreation Area in 1947, and Lake Mohave and the Shivwits Plateau were later added to its jurisdiction. [10] Both lakes and the surrounding area offer year-round recreation options.

The accumulated water from Hoover Dam forced the evacuation of several communities, most notably St. Thomas, Nevada, whose last resident left the town in 1938. [11] The ruins of St. Thomas are sometimes visible when the water level in Lake Mead drops below normal. [11] Lake Mead also covered the sites of the Colorado River landings of Callville and Rioville, Nevada, and the river crossing of Bonelli's Ferry, between Arizona and Nevada.

At lower water levels, a high-water mark or "bathtub ring" is visible in photos that show the shoreline of Lake Mead. The bathtub ring is white because of the deposition of minerals on previously submerged surfaces. [12] [13] 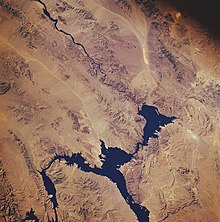 Lake Mead from space in November 1985: North is facing downward to the right. The Colorado River can be seen leading southward away from the lake on the top left. The Hoover Dam is located where the river meets the lake.

Sediment-laden water from the Colorado River flowing into Lake Mead on March 29–30, 2013.

Nine main access points to the lake are available. On the west are three roads from the Las Vegas metropolitan area. Access from the northwest from Interstate 15 is through the Valley of Fire State Park and the Moapa River Indian Reservation to the Overton Arm of the lake.

The lake is divided into several bodies. The large body closest to the Hoover Dam is Boulder Basin. The narrow channel, which was once known as Boulder Canyon and is now known as The Narrows, connects Boulder Basin to Virgin Basin to the east. The Virgin River and Muddy River empty into the Overton Arm, which is connected to the northern part of the Virgin Basin. The next basin to the east is Temple Basin, and following that is Gregg Basin, which is connected to the Temple Basin by the Virgin Canyon. When the lake levels are high enough, a section of the lake farther upstream from the Gregg Basin is flooded, which includes Grand Wash Bay, the Pearce Ferry Bay and launch ramp, and about 55 miles (89 km) of the Colorado River within the lower Grand Canyon, extending to the foot of 240 Mile Rapids (north of Peach Springs, Arizona). In addition, two small basins, the Muddy River Inlet and the Virgin River Basin, are flooded when the lake is high enough where these two rivers flow into the lake. As of February 2015, these basins remain dry.

In these decades prior to 2000, Glen Canyon Dam frequently released more than the required 8.23 million acre-feet (10,150,000 ML) to Lake Mead each year. This allowed Lake Mead to maintain a high water level despite releasing significantly more water than it is contracted for. However, since 2000, the Colorado River has experienced persistent drought, with average or above-average conditions occurring in only five years (2005, 2008–2009, 2011 and 2014) in the first 16 years of the 21st century. Although Glen Canyon was able to meet its required minimum release until 2014, the water level in Lake Mead has steadily declined. The decreasing water level is due to the loss of the surplus water that once made up for the annual overdraft.

Lake Mead as seen from the Hoover Dam with the white band clearly showing the high water level on December 22, 2012.

In 2012 and 2013, the Colorado River basin experienced its worst consecutive water years on record, prompting a low Glen Canyon release in 2014 – the lowest since 1963, during the initial filling of Lake Powell – in the interest of recovering the level of the upstream reservoir, which had fallen to less than 40% capacity as a result of the drought. [22] Consequently, Lake Mead's level fell significantly, reaching a new record low in 2014, 2015 and 2016. In 2014, its record low was 1,081.82 feet (329.74 m) on July 10, 2014. [23] On June 23, 2015, Lake Mead reached another new record low when it briefly fell below 1,075.0 feet (327.7 m), the first official "drought trigger" elevation, for the first time since the lake was filled. If the lake is below this elevation at the beginning of the water year, an official shortage declaration by the Bureau of Reclamation will enforce water rationing in Arizona and Nevada. The water year begins October 1 to coincide with seasonal Rocky Mountain snowfall, which produces most of the Colorado River's flow. [24] [25]

Lake Mead's water level rebounded a few feet by October 2015 and avoided triggering the drought restrictions. However, the water level started falling in Spring 2016 and fell below the drought trigger level of 1,075 feet again in May 2016. It fell to a new record low of 1,071.61 feet (326.63 m) on July 1, 2016 before beginning to rebound slowly. [26] Drought restrictions were narrowly avoided again when the lake level rose above 1,075 feet on September 28, 2016, three days before the deadline, and the Bureau of Land Reclamation did not issue a shortage declaration. [27] [28]

As a result of the decreasing water level, marinas and boat launch ramps have either had to be relocated to another area of the lake or have closed down permanently. The Las Vegas Bay Marina was relocated in 2002 [37] and the Lake Mead Marina was relocated in 2008 [38] to Hemenway Harbor. Overton Marina and Echo Bay Marina have been closed due to low levels in the northern part of the Overton Arm. Government Wash, Las Vegas Bay, and Pearce Ferry boat launch ramps have also been closed. Las Vegas Boat Harbor and Lake Mead Marina in Hemenway Harbor/Horsepower Cove remain open, along with Callville Bay Marina, Temple Bar Marina, Boulder Launch Area (former location of the Lake Mead Marina) and the South Cove launch ramp. [39]

Changing rainfall patterns, climate variability, high levels of evaporation, reduced snow melt runoff, and current water use patterns are putting pressure on water management resources at Lake Mead as the population relying on it for water, and the Hoover Dam for electricity, continues to increase. To lower the minimum lake level necessary to generate electricity from 1,050 feet (320 m) to 950 feet (290 m), Hoover Dam was retrofitted with wide-head turbines, designed to work efficiently with less flow in 2015 and 2016. [40] If water levels continue to drop, Hoover Dam would cease generating electricity when the water level falls below 950 feet (290 m) and the lake would stabilize at a level of 895 feet (273 m) when the water reaches the lowest water outlet of the dam. [41] In order to ensure that the city of Las Vegas will continue to be able to draw its drinking water from Lake Mead, nearly $1.5 billion was spent on building a new water intake tunnel in the middle of the lake at the elevation of 860 feet (260 m). [42] [43] The 3-mile (4.8 km) tunnel took seven years to build under the lake and was put into operation in late 2015.

Lake Mead provides many types of recreation to locals and visitors. Boating is the most popular. Additional activities include fishing, swimming, sunbathing, and water skiing. Four marinas are located on Lake Mead: Las Vegas Boat Harbor and Lake Mead Marina (in Hemenway Harbor, NV) operated by the Gripentogs, and Callville Bay (in Callville Bay, NV) and Temple Bar (in Arizona), both operated by Forever Resorts. The area also has many coves with rocky cliffs and sandy beaches. Several small to medium-sized islands occur in the lake area depending on the water level. In addition, the Alan Bible Visitor Center hosts the Alan Bible Botanical Garden, a small garden of cactus and other plants native to the Mojave Desert. The Grand Wash is a recreational area located in the north side of the lake.

On October 28, 1971 Lake Mead hosted the 1st ever B.A.S.S Bassmaster Classic. This fishing site was a "mystery lake" and the location of the tournament was not told to the 24 anglers until their plane was in the air. This "winner take all" payout of $10,000 was won by Bobby Murray of Arkansas.

Lake Mead Cruises, the Desert Princess is a three-level paddle wheeler certified by the U.S. Coast Guard for 275 passengers. They have daily cruises to the Hoover Dam.

The 2018 novel Lords of St. Thomas by Jackson Ellis tells the story of the last family to vacate the flooded town of St. Thomas in 1938 following construction of the Hoover Dam and creation of Lake Mead. [44]

At the bottom of the lake is a Boeing B-29 Superfortress that crashed in 1948 while testing a prototype missile guidance system known as "suntracker". [45]

The wreckages of at least two smaller airplanes are also submerged in Lake Mead. [46]