La Pietra: Hawaii School for Girls, also referred to as La Pietra or Hawaii School for Girls, is a private school for girls in grades 6–12 located in Honolulu, Hawaii. Founded in 1964 by Lorraine Cooke, it moved to the current La Pietra campus in 1969. Barbara Cox Anthony chaired the school's board of trustees until her death in 2007. The school is at the foot of Diamond Head. The main building was designed by Chicago architect, David Adler and was modeled after an Italian villa in Florence, Italy of the same name.

The site was near or partially on an ancient Hawaiian heiau (temple) called Papaʻenaʻena. Referred to by early writers as "Leahi" (the Hawaiian name for Diamond Head) heiau, it was quadrangular, about 80 ft (24 m) across with ocean facing terraces leading into the structure and several altars located near the back wall. Papaʻenaʻena was arguably built by Maui King Kahekili to commemorate his conquest of Oʻahu. This heiau was destroyed by Kanaia about 1856 and its stones were carted off to Waikiki for use as rock walls and driveways. Papaʻenaʻena figured Kamehameha I's conquest of the Hawaiian Islands. In 1804, when Kamehameha was on his way to invade Kauai he halted at Oʻahu with an army of 8000 men. An epidemic killed more than two-thirds of his army. During the epidemic Kamehameha, upon the advice of his priests, instituted a ten-day kapu (restriction) and sacrificed three humans and many hogs and edible plants. The men sacrificed were accused of eating tabu coconuts. Kamehameha also is reported to have sacrificed his nephew, Kanihonui, who broke the tabu with Kamehameha's Queen, Kaʻahumanu, at Papaʻenaʻena. [1] " It overlooked what is today First Break, the beginning of Kalehuawehe, a surfing course famous for hundreds of years. Kahuna at Papa’ena’ena flew a kite at the heiau to inform surfers that the waves were up." [2]

During the Mahele (when formal land titles were used for the first time) this site was given by the Kingdom of Hawaii to the future King Lunalilo. After the king's death this site was sold to James Campbell, in 1883. Walter F. Dillingham bought the land from Campbell and built a home for his bride, Louise Gaylord. Dillingham was the son of Benjamin Dillingham, of Oahu Railway and Land Company. The Dillinghams were married in Florence, Italy, at Villa La Pietra, the 600-year-old villa of Louise's aunt Hortense Mitchell Acton. After selecting the Diamond Head site as their home, Louise Dillingham and her husband hired Chicago architect David Adler to draw up plans for a villa that would draw its inspiration from Villa La Pietra in Florence, but not copy it. When completed in 1922 for $400,000 the main building included five bedrooms. These rooms, 47 years later, became the classrooms of the school. For 40 years La Pietra was the social center of Honolulu. The Dillinghams hosted many notable visitors, including President Franklin D. Roosevelt and Walt Disney. [3]

The portion which is now the school was left by Dillingham to Punahou School. Unable to use the building, Punahou was anxious to sell it. After a period in which there were few interested buyers (Punahou was asking $1 million for the estate), Lorraine Day Cooke (wife of Richard Aexander Cooke Jr., who was grandson of Charles Montague Cooke and great-grandson of Amos Starr Cooke, co-founder of Castle & Cooke) and Mrs. Garner Anthony raised the funds. They had started a Hawaii School for Girls at Central Union Church. Plans were developed by architect John Tatom and his assistant Tom Fanning. Work to convert the estate into a school was done by parent volunteers and the Dillingham's Hawaiian Dredging Company. Hawaii School for Girls moved into the site at the start of the 1969-1970 school year. In 1976 a new six-classroom building was constructed on the site of the old swimming pool. This building, designed by Leo Wou, was intended to mirror the architecture of the Dillingham villa.

La Pietra is just a few hundred yards above Honolulu's Kapiʻolani Park. As swamp land in a desert, the land became a park specifically because it wasn't considered suitable for anything else. It is one of the few places on Oahu where rain rarely falls. Because La Pietra has limited space for athletics, Kapiʻolani Park is used for physical education classes and training for soccer and cross country running teams. 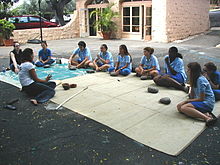 Joseph Pynchon was founding headmaster at La Pietra from its inception in 1964 until his retirement at the end of the 1990-1991 school year. He joined La Pietra from ʻ Iolani School, where he was chairman of the English Department. Born in Boston, he served in Italy and India with the American Field Service in World War II. He earned a bachelor of arts degree from Carroll College in Waukesha, Wis., and a master's of education degree from Harvard University. He was a freelance and features writer for Boston daily and weekly newspapers and magazines, as well as for education journals. [4] La Pietra's first headmaster died January 2, 2008.

Nancy White was replaced by Mahina Eleneki Hugo, La Pietra's middle school dean. She was the fourth headmistress of the school. She earned a bachelor's degree in sociology and a master's in education in private school leadership from the University of Hawaii.

Mahina Hugo was replaced by Dr. Joshua Watson. Prior to joining La Pietra, Dr. Watson served as the Assistant Principal for Student Life at Mid-Pacific Institute in Honolulu. Dr. Watson serves as the current Head of School. [6]

On May 28, 2007 Barbara Cox Anthony, La Pietra's founder died at the age of 84. According to Forbes magazine, Anthony, the daughter of three-time Ohio governor James Cox (who also founded Cox Enterprises) was worth 12.6 billion dollars and the richest woman in Hawaii. [7] Cox was replaced on La Pietra's board by Alice Guild.

Anthony married four times: Her first husband, Bradford Ripley, a naval aviator, died during World War II. The young widow met and married Stanley Kennedy while in Miami, where he was a member of the underwater demolition teams, the precursor to today's Navy SEALs. Stanley Kennedy was the son of the founder of Inter-Island Airways and its successor, Hawaiian Airlines. They moved here and she quickly took to the Islands, making it her home for the next 62 years. After their divorce, she married Glover, who died a few years later of a heart attack. Later, she wed Garner Anthony. Friends said she found much joy in her children and grandchildren. She is also remembered as an avid athlete who loved the outdoors. She'd competed in rodeos as a girl, and later other sports. She rode dirt bikes and raced cars. "A group of us played tennis at Beretania tennis court," recalled longtime friend Bill Morris. He quipped, "We allowed her to play with us as long as she brought the sandwiches and iced tea after the game." Actually, he added, she was a tennis standout, once winning a Miami tennis doubles championship with Jack Kramer. Her activity level remained high despite advancing age. "She was snow skiing when she was 79 with an artificial hip, if that gives you an idea," Kennedy said. And she especially loved activity involving animals. "She was a great equestrian, and raised horses," Kennedy said. The Dayton Daily News, the first newspaper founded by her father, reported that in Hawaii, beneficiaries of her donations included the Aloha United Way, a police officers charity, homeless shelters, animal rescue groups, hospitals, the YMCA, the Salvation Army and the Honolulu Museum of Art. That love of animals also translated into support for the Hawaiian Humane Society, though throughout her life, much of her benefactor role was kept quiet. "She didn't want or need to take credit for her generosity," Morris said. "Every year Forbes came out, we'd learn that (she was the richest person in Hawai'i). She was rich in different ways. She was rich in heart." Listed by Forbes in March as the 45th richest person in the nation, she was the only Hawai'i resident to make the list of billionaires. She had homes at Diamond Head and on the Big Island and elsewhere outside Hawai'i. Anthony and her sister, Anne Cox Chambers, served on the board of Cox Enterprises. She became "the financial angel for La Pietra," said Morris, who met her about six decades ago, surfing in Waikiki. "Whenever they needed money, she supplied it," he said, adding that in addition to meeting the school's financial needs, she helped with the headmistress' quarters and scholarships. "She was very generous," Morris said. "She gave a lot of people scholarships, but without people knowing where it came from. She gave money to Punahou for scholarships, but didn't want them to know who gave it." It was her way of staying under the radar. "Every Monday, she'd get a foot-high stack of people asking for money," Morris said. "She didn't want to be given any sort of publicity about things. She knew if (her various contributions would be made public), she'd get, instead of one foot of requests, it'd be two feet." But when Anthony would hear about a girl who might not be able to make tuition at La Pietra, she was quick to help. "She was very supportive of our school," said Nancy White of La Pietra. "She really was a supporter of education for young women; she wanted them to have full lives." [7]