La Défense (French:  [la de.fɑ̃s]) is a major business district located 3 kilometres (1.9 mi) west of the city limits of Paris. It is part of the Paris metropolitan area in the Île-de-France region, located in the department of Hauts-de-Seine in the communes of Courbevoie, La Garenne-Colombes, Nanterre, and Puteaux.

The district is located at the westernmost extremity of the 10-kilometre-long (6.2 mi) Axe historique ("historical axis") of Paris, which starts at the Louvre in Central Paris and continues along the Champs-Élysées, well beyond the Arc de Triomphe along the Avenue de la Grande Armée before culminating at La Défense. The district is centred in an orbital motorway straddling the Hauts-de-Seine department communes of Courbevoie, La Garenne-Colombes, Nanterre and Puteaux. La Défense is primarily a business district and hosts a population of 25,000 permanent residents and 45,000 students. [1] [3] La Défense is also visited by 8,000,000 tourists each year [1] and houses an open-air museum. [4]

La Grande Arche de la Défense and the Yaacov Agam Fountain (1977). The bronze sculpture on the left, seen from the rear, is La Défense de Paris by Louis-Ernest Barrias, after which La Défense is named. 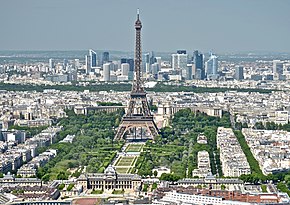 Paris, with the skyscrapers of La Défense in the background and the Eiffel Tower in the foreground taken in 2014 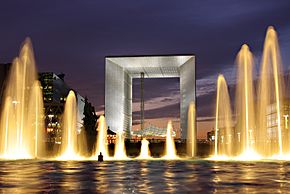 La Défense is named after the statue La Défense de Paris by Louis-Ernest Barrias, which was erected in 1883 to commemorate the soldiers who had defended Paris during the Franco-Prussian War.

In September 1958, the Public Establishment for Installation of La Défense [ fr] (EPAD) buildings (of which the Esso Tower was the very first) were built and began to slowly replace the city's factories, shanties, and even a few farms. The Centre of New Industries and Technologies (CNIT) was built and first used in 1958. These "first generation" skyscrapers were all very similar in appearance, limited to a height of 100 metres (330 ft). In 1966, the Nobel Tower was the first office skyscraper built in the area. In 1970, the RER line A railway was opened from La Défense to Étoile. [5] In 1974, a contract for a Défense- Cergy high-speed hovercraft train was signed and soon abandoned.

In the early 1970s, in response to great demand, a second generation of buildings began to appear, but the economic crisis in 1973 nearly halted all construction in the area. A third generation of towers began to appear in the early 1980s. The biggest shopping centre in Europe (at the time), the Quatre Temps, was created in 1981. In 1982, the EPAD launched the Tête Défense competition to find a monument to complete the Axe historique, which eventually led to the construction of Grande Arche at the west end of the quarter. During the same period, hotels were constructed, the CNIT was restructured, and in 1992, Line 1 of the Paris Métro was extended to La Défense, which made the area readily accessible to even more of the city.[ citation needed]

On Bastille Day 1990, French electronic composer Jean-Michel Jarre staged an ambitious concert at the site, using the Grande Arche and three of the area's towers as projection screens, and building a pyramidal stage above the road. The free concert, titled simply Paris la Defense, attracted two million spectators, stretching all the way back to the Arc de Triomphe. This beat Jarre's own previous world record for the largest attendance for a musical concert. After Jean Michel Jarre, German DJ Sash! and the singer La Trec have set at La Défense the video clip for their song Stay in 1997.

After a stagnation in new development in the mid-1990s, La Défense is once again expanding and is now the largest purpose-built business district in Europe.

Important corporations headquartered at La Défense include Neuf Cegetel, Société Générale, TotalEnergies, Aventis, Areva, and Arcelor. The tallest skyscraper, the Tour First belongs to AXA, constructed in 1974. It is 231 metres (758 ft) high, has 50 floors, and is the highest inhabited building in the Paris area (a title previously held by the Tour Montparnasse, which was the tallest inhabited building until the Tour First was renovated between 2007 and 2011, bringing it to its current height from a previous 159 metres (522 ft); the tallest structure in Paris is the Eiffel Tower).

On 9 September 2008, La Défense celebrated its 50th anniversary with a huge fireworks display. [6]

The government confirmed in July 2006 this plan, which has to be carried out around 2015. It is justified by the strong estate pressure, which plays in favour of building new skyscrapers near Paris. Those constructions have also the advantage to be more economical than little buildings. But it will have to overcome some difficulties: French economy faces a short-term slowdown; the government tries to balance tertiary sector employment in the whole region again, because La Défense today concentrates a major part of those jobs; and traffic is already saturated in the district, while it would need huge investments to extend transport infrastructures.

The district at night

Besides the representative architecture, the area also houses an open-air museum with 70 statues and pieces of modern art, [4] including the following works:

Wikivoyage has a travel guide for La Défense.