Kuala Lumpur City Centre (KLCC) is a multipurpose development area in Kuala Lumpur, Malaysia. KLCC refers to the area within and surrounding the KLCC Park but the term has also been widely used by buildings nearby to the vicinity.

Designed to be a city within a city, the 100-acre site hosts the tallest twin buildings in the world, the fourth tallest hotel in the world, a shopping mall, office buildings and several hotels. A public park and a mosque have also been built in the area and are open to everyone. Areas within KLCC is cooled via district cooling located on the property. The whole precinct was developed by KLCC Property Holdings Berhad (KLCCP) of the KLCC Group of Companies, a property investment arm of Petronas. 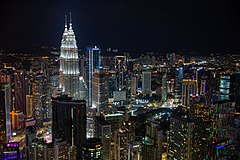 View of the KLCC precinct at night from the Kuala Lumpur Tower.

The site of the Kuala Lumpur City Centre was historically part of an affluent suburban residential area north of the old Kuala Lumpur town, linked to the town via Ampang Road and populated by bungalows and mansions dating as far back as the colonial early-20th century. The centrepiece of the area was the original site of the Selangor Turf Club, [1] with many houses constructed around the site to capitalise on views of the racing course. As large scale development moved northwards from old Kuala Lumpur town after the 1950s, development of the area gradually shifted from low-density residential homes to high-density commercial complexes and offices, raising the appeal of developing the suburb into a new commercial centre for Kuala Lumpur. In 1988, the Selangor Turf Club site and adjoining residential parcels were sold to be cleared away for the KLCC project; the Turf Club was subsequently relocated to Serdang. In the subsequent years after the relocation of the Turf Club, more surrounding residential plots were acquired for further development of KLCC.

The KLCC development is (unofficially) defined as the area bounded by Jalan Ampang in the north, Jalan P Ramlee in the west, Jalan Pinang and Jalan Kia Peng in the south, and Jalan Stonor in the east.

For land administration purposes, the KLCC precinct is listed as the 58th section, Bandar Kuala Lumpur. [2]

KLCC is an area with mixed developments in various stages of construction. The area is divided into several plots of land, each with a specific purpose. Zoning of the development is based on the KLCC Masterplan. [3] [4]

The famous Petronas Twin Towers which stands in the middle, with the Maxis Tower (right) and Petronas Tower 3 (left), while the Four Seasons Place KL is the latest addition within the KLCC development.

The 88-storey towers were built using mostly reinforced concrete, with steel-and-glass facades to resemble Islamic motifs which were intended to reflect the official and majority religion of Malaysia. The cross section of the tower resembles Rub el Hizb, which further solidifies the Islamic motif in the tower design.

ExxonMobil Tower was completed 1 January 1997 and it is the headquarters of the Malaysian subsidiary of ExxonMobil, one of the largest listed companies in the world.

Officially Menara 3 Petronas, this tower is a 60-story tower which was completed in 2012. The tower is connected with the shopping mall Suria KL

The tower is also designed by César Pelli with construction started in 2006 and finished in 2012. The tower has a separate entrance facing the Mandarin Oriental hotel and also has a tunnel link towards Lot D1. Lot D1 will be the site of a future development by the owner, KLCC Properties. Like the Petronas Twin Towers, the Building Services Engineer was Flack + Kurtz.

Menara Maxis is the headquarters of Maxis Communications, one of Malaysia's largest telecommunication companies.

Suria KLCC is currently the only and main commercial centre in the KLCC area. The shopping mall occupies space underneath the Petronas Twin Towers and shares its parking lot ( Suria KLCC parking rate) with it. The six-story shopping mall was extended to Menara Carigali in 2011. There are plans to extend the mall to Lot K and also Lot D1 as well.

The mall is linked to the Kuala Lumpur Convention Centre via an underground pedestrian tunnel, which in turn is connected to the Bukit Bintang shopping district via an elevated pedestrian walkway.

The Building Services Engineer was Flack + Kurtz who is currently part of the WSP | Parsons Brinkerhoff Company.

There are currently four hotels in the KLCC precinct:

The Binjai On The Park

The Binjai On The Park is the only residential area within the development. [9] The residential space is two 42-story buildings having an unobstructed view of the Petronas Twin Towers. It is designed by Allen Jack + Cottier (known famously as AJ+C), the Australian-based architect with regional presence in Malaysia, Vietnam and China. [10] The residential towers is the most expensive in Malaysia with a 19,500 square feet penthouse has been sold for a record RM50 million. [11]

At the centre of the property lies KLCC Park. The park is one of the last designs of notable Brazilian park designer Roberto Burle Marx. The park holds a jogging track, a public swimming pool, several children's playground and a man-made lake complete with water fountains.

The area also has a mosque known as As Syakirin Mosque which has the capacity to hold 12,000 people. Naturally, many religious activities such as Friday prayers are conducted here.

KLCC is served by a light rapid transit (LRT) line at  KJ10  KLCC station, served by the 5 Kelana Jaya Line. The underground station is located in the basement of Avenue K, a shopping complex opposite Suria KLCC across Jalan Ampang. The station is connected to Suria KLCC via an underground pedestrian walkway. It is also a bus hub for the RapidKL bus network, the largest public transport operator in Kuala Lumpur.

The district will also be served by the  PY21  Persiaran KLCC station, formerly known as KLCC East station, on the 12 MRT Putrajaya Line. The second phase of the line is expected to be completed in 2023 where this underground station is included. It will be directly connected to the KLCC Retail Podium and the Tower M in the future.

A dedicated taxi stand, which utilises the coupon system, is available at the shopping mall entrance. Patrons who do not wish to use the system have the option to walk up to another taxi stand which is situated on the main road.

Although the area is bordered by 5 main roads, main road access is through Jalan Ampang, Jalan Sultan Ismail and the Ampang–Kuala Lumpur Elevated Highway (AKLEH). The AKLEH access is quite unique in the sense that the highway has direct tunnel access to the area's extensive underground parking lot.

KLCC is also connected to Jalan Ampang via an underground tunnel.

The developer (Petronas) has spent RM100 million as part of its social contribution programme to build an elevated, air-conditioned walkway from the Kuala Lumpur Convention Centre to Bukit Bintang shopping district. From there, pedestrians can access the  MR6  Bukit Bintang and  MR7  Raja Chulan Monorail stations on the 8 KL Monorail line, and the  SBK18A  Bukit Bintang MRT station on the 9 Sungai Buloh-Kajang Line.

District cooling for the entire area is provided by KLCC Cooling, which is situated in Lot 40. The cooling was done via gas-powered turbine generator. This district cooling concept is the first implementation in Malaysia. [12]

The engineer for the District Cooling Center was Flack + Kurtz (currently part of the WSP | Parsons Brinkerhoff Company). The plant was renovated and upgraded and activated in 2015. The current capacity is approximately 70,000 tons and has 180,000 ton hours of ice storage.