As of the 2011 American Community Survey, New York City is home to 100,000 ethnic Koreans, with two-thirds living in the borough of Queens. [6] On the other hand, the overall Greater New York Combined Statistical Area [7] enumerated 218,764 Korean American residents as of the 2010 United States Census, the second-largest population of Koreans outside of Korea and the most prominent. [8]

Mass Korean immigration to the United States began in the 1950s, with a large wave occurring over the 1960s and 1970s. Koreans historically came to the New York metropolitan area with the intention of permanently settling in the city and establishing businesses. Originally, ethnic Koreans settled in highly urbanized neighborhoods in Manhattan and Queens, but beginning in the 1980s, wealthier Koreans began moving to suburban communities in nearby Bergen County, New Jersey across the George Washington Bridge, alongside the Hudson River—as well as to adjacent Nassau County (on Long Island) and Westchester County, both locally within New York State itself. Many ethnic Koreans moved into areas already settled by the metropolitan Japanese community. By 1988, there were about 150,000 ethnic Koreans living in the New York City area. [9]

Manhattan's Koreatown is primarily a Korean business district in Midtown Manhattan, but since 2008, the district has seen an increase in Korean and European traffic as well, [10] and the resident Korean population in the area has grown concomitantly. There was never a formal plan or agreement to create a Korean commercial district in Manhattan. However, given the high levels of tourist traffic stemming from its proximity to the Empire State Building, [10] Macy's Herald Square, Penn Station, [10] Madison Square Garden, the Garment District, and the Flower District, amongst other Midtown Manhattan landmarks, it was an ideal location for Korean immigrants to settle. Initiated by the opening of a Korean bookstore and a handful of restaurants in the 1980s, Koreatown sprang into being. With their success, an additional stream of Korean-owned businesses took root in the neighborhood, coinciding with increased immigration from Korea; and with rising demand for the prime location, overall property values in the area increased as well. [10] According to the 2010 United States Census, the Korean population of Manhattan (co-extensive with New York County) had nearly doubled to approximately 20,000 over the decade since the 2000 Census. [11] Although Korea Way continues to represent the heart of Koreatown, situated between Broadway, Sixth Avenue, and Fifth Avenue, Koreatown itself has been expanding further eastward from Fifth Avenue along East 32nd Street, toward Madison Avenue in Midtown Manhattan, in the direction of Queens. [12] [13] [14] Koreatown, Manhattan has become described as the "Korean Times Square" and has emerged as the international economic outpost for the Korean chaebol. [15] More broadly, Koreatown is attracting new Korean residents to the adjacent Manhattan neighborhoods of Murray Hill, Kips Bay, and Rose Hill.

In the 1980s, a continuous stream of Korean immigrants also emerged into the Long Island Koreatown, many of whom began as workers in the medical field or Korean international students who had moved to New York City to find or initiate professional or entrepreneurial positions. [1] They established a foothold on Union Street in the Flushing neighborhood of Queens, between 35th and 41st Avenues, [1] featuring restaurants and karaoke ( noraebang) bars, grocery markets, education centers and bookstores, banking institutions, offices, consumer electronics vendors, apparel boutiques, and other commercial enterprises. [2] In 1990, Korean-American owned shops were boycotted in the Flatbush section of Brooklyn; the boycott started by Black Nationalist, Sonny Carson, lasted for six months and became known as the Flatbush boycott.

As the community grew in wealth and population and rose in socioeconomic status, Koreans expanded their presence eastward along Northern Boulevard, buying homes [5] in more affluent and less crowded Queens neighborhoods and more recently into adjacent suburban Nassau County, bringing their businesses with them, and thereby expanding the Koreatown itself. [2] This expansion has led to the creation of an American Meokjagolmok, or Korean Restaurant Street, around the Long Island Rail Road station in Murray Hill, Queens, exuding the ambience of Seoul itself. [2] The eastward pressure to expand was also created by the inability to move westward, inhibited by the formidable presence of the enormous Flushing Chinatown centered on Main Street. [1] Per the 2010 United States Census, the Korean population of Queens was 64,107, [16] while the Korean population of Nassau County had increased by nearly two-thirds to approximately 14,000 over one decade since the 2000 Census. [17] Korean Air and Asiana Airlines provide non-stop flights from Seoul to JFK Airport [18] [19] in Queens, and the Consulate-General of South Korea in Manhattan has played an important role in mediating travel to and from Korea by the Korean diaspora living in the New York metropolitan area. 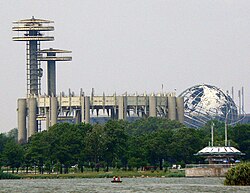 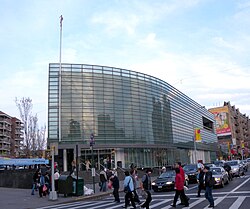 Other established and growing Koreatowns in the New York metropolitan area are located in nearby Bergen County, New Jersey, namely the Fort Lee Koreatown and the Palisades Park Koreatown. Signage in Hangul is ubiquitous in all of the Koreatowns.

Korean language schools in the New York City region tend to have distinct educational missions and clienteles, and each school has its own distinct management. Because ethnic Koreans settling in New York City generally intend to permanently immigrate to the United States, the only Korean-oriented schools are supplementary institutions holding classes on Saturdays and Sundays. [20]

The Korean School of New York was the first secular Korean school established in the city, opening in 1973. The founder, who remained as the school's principal academic administrator in 1988, believed that Korean language education should be separate from religion. [20] As of 1988, this school had 205 students. [22]

Development of Koreatown, Manhattan as a Korean dining destination

Approximately fifteen restaurants conduct business 24/7 on Korea Way in Koreatown, Manhattan. [24] Korean restaurants in the district have had to expand or stay open around the clock to meet rising commercial rents and stay financially viable, given the growing prestige and high customer volume generated by foot traffic in Koreatown, Manhattan, and greater investment and involvement by the Korean chaebol. [15] [25] Historically known as a more tourist-oriented alternative to the residential and somewhat suburban Flushing and Murray Hill, Queens in the nearby Long Island Koreatown, Koreatown in Manhattan has since developed a reputation as an authentic Korean dining destination. [25]

Recognition by chefs and authenticity of Korean cuisine in Queens

The K-Pop industry is active in New York City, hosting numerous concerts in the city as well as being home to K-Pop musicians. The musical KPOP opened Off-Broadway in 2017 and moved to Broadway in 2022, with Luna in the starring role, and co-starring fellow K-pop stars Kevin Woo, Min-Young Lee, and Kim Bo-hyung (김보형).

Korean Americans have emerged prominently in the New York City journalism sphere. This media subsection has been created to acknowledge this professional prominence.