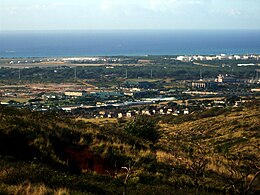 Kapolei is a planned community in Honolulu County, Hawaiʻi, United States, on the island of Oʻahu. It is colloquially known as the "second city" of Oʻahu, [3] in relation to Honolulu. For statistical purposes, the United States Census Bureau has defined Kapolei as a census-designated place (CDP) within the consolidated city-county of Honolulu.

The community takes its name from a volcanic cone, Puʻu o Kapolei. In the Hawaiian language, puʻu means "hill" and Kapo lei means "beloved Kapo". According to legend, Kapo, Goddess of Fertility was sister to Pele, Goddess of Fire and Nāmaka, Goddess of the Sea.

Much of the land is part of the estate of industrialist James Campbell. Kapolei's major developer is Kapolei Property Development, a subsidiary of James Campbell Company. [4] Kapolei sits primarily upon former sugarcane and pineapple fields.

[5] In 1955 the Kapolei master plan was drafted and revised 3 different times beginning in 1974. In 1977 the new General Provision Plan adopted the Oʻahu General Plan which dubbed Kapolei "second urban center" (SUC) on the island of Oʻahu. In 1986 the ʻEwa Master Plan was revised to include the SUC and the initial residential construction in the Kapolei area began in the late 1980s with commercial developments springing up shortly thereafter. Nearly two decades later, in 2006 the Kapolei area had more than 800 companies, agencies, and organizations making up approximately 25,000 jobs. As of the 2010 census, the Kapolei CDP had a population of 15,186 people. [6]

The original development objectives for the City of Kapolei were to include: an employment center, a new center for offices and businesses, a center for government offices, a city of people walking, biking, or bussing, the latest energy-efficient technologies such as water conservation and recycling, and the most efficient connectivity for commuting on Oʻahu. In essence a "smart city". The design plan for development ensures that the 7 themes of Kapolei remain the same throughout its construction. These include 1. Hawaiian Garden City 2. Healthy Living 3. Complete Community Services 4. Pedestrian-friendly 5. Past/Present/Future design architecture 6. Sustainability 7. Technology.

Kapolei is quickly becoming the second urban center of Oʻahu, Hawaiʻi's most densely populated island. Much of Oʻahu's future population growth is projected for the Kapolei area, ʻEwa Plain, and southern slopes of the island's central valley, between Waipahu near Pearl Harbor and Wahiawā near the island's center.

Other communities in the Kapolei area are the census-designated places of Makakilo and Naval Air Station Barbers Point (now known as Kalaeloa), the industrial area known as Campbell Industrial Park with the state's second largest deepwater port, Barbers Point Harbor, [7] and the resort and marina community of Ko Olina, which includes the Disney Aulani Resort and Ko Olina Golf Club.

Ongoing road construction has not resolved continuing traffic problems. A Manawai Street-Kama‘aha Avenue extension was completed in August 2006 and helped to reduce congestion along Kamokila Boulevard and Farrington Highway. Kapolei Property Development began construction in January 2007 on a $2 million road to extend Kamokila Boulevard from Kapolei Parkway to Roosevelt Avenue. Kapolei Property Development recently contributed $6 million for a joint project with the State Department of Transportation for an additional freeway on-ramp.

Although state and county governments and some of Hawaiʻi's largest companies have significant workplaces in Kapolei, population growth has far out-paced local job creation. A majority of Kapolei adults work in Honolulu, congesting the main traffic artery, Interstate H-1. In December 2006, the Honolulu City Council approved a fixed-guideway elevated rail system connecting Kapolei to Downtown Honolulu. In January 2007, Oʻahu residents saw an increase of 0.5 percent to the general excise tax to help cover the costs of construction of the system. The project broke ground in East Kapolei on February 22, 2011. Work on the foundations for the concrete pillars began shortly after in Waipahu; work to install the pillars started in East Kapolei in April 2012, and the first phase of the project is expected to start service to Aloha Stadium in late 2021.

Kapolei is located at the southern end of the slopes of the Waiʻanae mountain near the neighborhood of Makakilo with Fort Barrette Road, located along and named for historically important Fort Barrette, connecting Makakilo to Kapolei. It is located on the ʻEwa Plain approximately 25 miles (40 km) from Honolulu. The Interstate H-1 freeway divides more recently developed Kapolei from Makakilo, and traveling eastward on H-1 connects to Waipahu. In the other direction, the freeway ends about 1 mile (1.6 km) west of Kapolei, merging into Farrington Highway (State Route 93) to Kahe and then to Nānākuli on the Wai‘anae Coast. Traveling eastward on Farrington Highway connects to Honouliuli. Exit 1 on H-1 is Kalaeloa Boulevard, the entrance to Barbers Point and Campbell Industrial Park. Less than 1 mile beyond (west of) the merge of H-1 and Farrington Highway is an off-ramp and overcrossing to the West Oʻahu resort area of Ko Olina.

To the south, Renton Road connects Kapolei to Kalaeloa and, further east, to ʻEwa Villages.

Kapolei Hale, built in 2001, serves as the civic center and main municipal building of the City of Kapolei. [13] The building contains an office for the Mayor, as well as offices of various city and county government agencies and is the headquarters for the City and County of Honolulu Department of Parks and Recreation. [14] However, the Permits Office for the Department of Parks and Recreation is located downtown Honolulu at the Frank F. Fasi Civic Center in the Frank F. Fasi Municipal Building at 650 South King Street. [15] [16] [17] [18] [19] [20] [21]

Additionally, federal, several state, and county department offices have been relocated to the Kapolei area. [7] In 2010 the Hawaiʻi State Judiciary Court relocated family court matters from cramped offices in downtown Honolulu to a newly constructed, technologically advanced building in Kapolei. [22]

The Federal Bureau of Investigation (FBI) Honolulu field office is in Kapolei at 91-1300 Enterprise Street. [25] Opened in 2013, it is the first federal agency to be headquartered in Kapolei. This Honolulu field office has jurisdiction over Hawaiʻi, Guam, Saipan, and American Samoa with resident agencies in Maui, Kona, Guam, and Saipan. [7] [26] [27] The previous site in downtown Honolulu was too small. [28] [29]

Honolulu Rail Transit is expected to commence service to East Kapolei station in 2020.