From Wikipedia, the free encyclopedia
Region of Japan
This article is about the Kanto region of Japan. For other uses, see Kanto.
Region in Japan 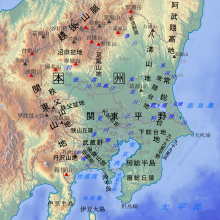 The Kanto region (関東地方, Kantō-chihō) is a geographical area of Honshu, the largest island of Japan. [3] In a common definition, the region includes the Greater Tokyo Area and encompasses seven prefectures: Gunma, Tochigi, Ibaraki, Saitama, Tokyo, Chiba and Kanagawa. Slightly more than 45 percent of the land area within its boundaries is the Kanto Plain. The rest consists of the hills and mountains that form land borders with other regions of Japan.

As the Kanto region contains Tokyo, the capital and largest city of Japan, the region is considered the center of Japan's politics and economy. According to the official census on October 1, 2010, by the Japan Statistics Bureau, the population was 42,607,376, [4] amounting to approximately one third of the total population of Japan.

In the police organization of Japan, the National Police Agency's supervisory office for Kantō (関東管区警察局, Kantō kanku keisatsu-kyoku) is responsible for the Prefectural police departments of Ibaraki, Tochigi, Gunma, Saitama, Chiba, Kanagawa, Niigata, Yamanashi, Nagano and Shizuoka. [11] Tokyo is not part of Kantō or any NPA region, its police has a dedicated liaison office with the national agency of its own.[ citation needed] 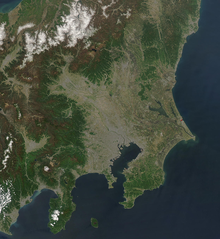 The surface geology of the Kanto Plain is the Quaternary alluvium and diluvium. The low mountain vegetation at an altitude of about 500 to 900 m in and around the plain is an evergreen broad-leaved forest zone. The distribution height range of laurel forests is 900m in Hakone, about 800m in Tanzawa and Takao, about 700m in Okutama, Oku Musashi and Oku Chichibu, about 600m in Nishijoshu, Akagiyama, Ashio Mountains and Tsukuba Mountains and about 500m in Kitage and Nasu Mountains.

Mountains are spread out such as the Taishaku Mountains, Mt. Takahara, Mt. Nasu, Mt. Yamizo, and Mt. The Kanto Plain, which is the largest plain in Japan. Just north of the Enna Hills is Japan's largest alluvial fan Nasuno at the foot of Mt. The Kujukuri Plain. The southern part of Chiba prefecture is the Boso hills. The area around Kasumigaura in Ibaraki prefecture is the Joso plateau and Hitachi plateau. Gunma prefecture and the Chichibu region of Saitama prefecture are basins. Rivers such as the Arakawa and Edo rivers pour into Tokyo Bay, and the Kinugawa and Tone rivers flow into the Pacific Ocean in Inubōsaki.

Tokyo Bay is surrounded by the Boso Peninsula and the Miura Peninsula, facing the west side of Chiba Prefecture, a part of Tokyo and the east side of Kanagawa Prefecture, and borders the Pacific Ocean from Uraga Suido. The coastal area is an industrial area. The south side of Kanagawa Prefecture faces Sagami Bay and Sagami Nada. The southern coast of Ibaraki Prefecture faces Kashima Nada. The Sagami Trough, which was the epicenter of the two Kanto earthquakes, passes through Sagami Bay. Efforts are being made to take safety measures against earthquakes in various places.

The heartland of feudal power during the Kamakura period and again in the Edo period, Kanto became the center of modern development. Within the Greater Tokyo Area and especially the Tokyo- Yokohama metropolitan area, Kanto houses not only Japan's seat of government but also the nation's largest group of universities and cultural institutions, the greatest population and a large industrial zone. Although most of the Kanto plain is used for residential, commercial or industrial construction, it is still farmed. Rice is the principal crop, although the zone around Tokyo and Yokohama has been landscaped to grow garden produce for the metropolitan market.[ citation needed]

A watershed moment of Japan's modern history took place in the late Taishō period: the Great Kanto earthquake of 1923. The quake, which claimed more than 100,000 lives and ravaged the Tokyo and Yokohama areas, occurred at a time when Japan was still reeling from the economic recession in reaction to the high-flying years during World War I.[ citation needed]

Operation Coronet, part of Operation Downfall, the proposed Allied invasion of Japan during World War II, was scheduled to land at the Kantō plain. Most of the United States military bases on the island of Honshu are situated on the Kantō plain. These include Naval Air Facility Atsugi, Yokota Air Base, Yokosuka Naval Base, and Camp Zama.[ citation needed]

After the Great Kanto earthquake many people in Kanto started creating art with different varieties of colors. They made art of earthquake and small towns to symbolize the small towns destroyed in the quake.[ citation needed]

Mount Nikkō-Shirane, in the Kantō region

The most often used subdivision of the region is dividing it to "North Kantō" (北関東, Kita-Kantō), consisting of Ibaraki, Tochigi, and Gunma Prefectures, and "South Kantō" (南関東, Minami-Kantō), consisting of Saitama (sometimes classified North),[ citation needed][ by whom?] Chiba, the Tokyo Metropolis (sometimes singulated),[ citation needed] and Kanagawa Prefectures.[ citation needed] South Kantō is often regarded as synonymous with the Greater Tokyo Area. As part of Japan's attempts to predict earthquakes, an area roughly corresponding to South Kantō has been designated an 'Area of Intensified Observation' by the Coordinating Committee for Earthquake Prediction. [14]

This division is not often but sometimes used.

This division is sometimes used in economics and geography. The border can be modified if the topography is taken for prefectural boundaries.

The Kantō region is the most highly developed, urbanized, and industrialized part of Japan. Tokyo and Yokohama form a single industrial complex with a concentration of light and heavy industry along Tokyo Bay. Other major cities in the area include Kawasaki (in Kanagawa Prefecture); Saitama (in Saitama Prefecture); and Chiba (in Chiba Prefecture). Smaller cities, farther away from the coast, house substantial light and automotive industries. The average population density reached 1,192 persons per square kilometer in 1991.

The Kantō region largely corresponds to the Tokyo metropolitan area with the exception that it does not contain Yamanashi prefecture.

The Tokyo metropolitan area has the largest city economy in the world and is one of the major global center of trade and commerce along with New York City, Los Angeles, Shanghai, Paris, Seoul and London. 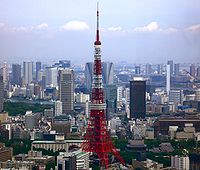 The agglomeration of Tokyo is the world's largest economy, with the largest gross metropolitan product at purchasing power parity (PPP) in the world according to a study by PricewaterhouseCoopers. [17]

The population of Kanto region is very similar to that of Greater Tokyo Area [19][ better source needed] except that it does not contain Yamanashi Prefecture and contains the rural populations throughout the region.

Per Japanese census data, [20] and [21] Kanto region's population has continuously grown but the population growth rate has slowed since early 1992.