The prefecture has some archaeological sites going back to the Jōmon period (around 400 BCE). About 3,000 years ago, Mount Hakone produced a volcanic explosion which resulted in Lake Ashi on the western area of the prefecture.[ citation needed]

It is believed[ by whom?] that the Yamato dynasty ruled this area from the 5th century onwards. In the ancient era, its plains were very sparsely inhabited.[ citation needed]

In medieval Japan, Kanagawa was part of the provinces of Sagami and Musashi. [3] Kamakura in central Sagami was the capital of Japan during the Kamakura period (1185–1333).

During the Edo period, the western part of Sagami Province was governed by the daimyō of Odawara Castle, while the eastern part was directly governed by the Tokugawa shogunate in Edo (modern-day Tokyo).[ citation needed]

Commodore Matthew Perry landed in Kanagawa in 1853 and 1854 and signed the Convention of Kanagawa to force open Japanese ports to the United States. Yokohama, the largest deep-water port in Tokyo Bay, was opened to foreign traders in 1859 after several more years of foreign pressure, and eventually developed into the largest trading port in Japan. Nearby Yokosuka, closer to the mouth of Tokyo Bay, developed as a naval port and now serves as headquarters for the U.S. 7th Fleet and the fleet operations of the Japan Maritime Self-Defense Force. After the Meiji period, many foreigners lived in Yokohama City, and visited Hakone. The Meiji government developed the first railways in Japan, from Shinbashi (in Tokyo) to Yokohama in 1872.[ citation needed]

The epicenter of the 1923 Great Kantō earthquake was deep beneath Izu Ōshima Island in Sagami Bay. It devastated Tokyo, the port city of Yokohama, surrounding prefectures of Chiba, Kanagawa, and Shizuoka, and caused widespread damage throughout the Kantō region. [4] The sea receded as much as 400 metres from the shore at Manazuru Point, and then rushed back towards the shore in a great wall of water which swamped Mitsuishi-shima. [5] At Kamakura, the total death toll from earthquake, tsunami, and fire exceeded 2,000 victims. [6] At Odawara, ninety percent of the buildings collapsed immediately, and subsequent fires burned the rubble along with anything else left standing. [7]

Yokohama, Kawasaki, and other major cities were heavily damaged by the U.S. bombing in 1945. Total Casualties amounted to more than several thousand. After the war, General Douglas MacArthur, the Supreme Commander of the Allied Powers for the Occupation of Japan, landed in Kanagawa, before moving to other areas. U.S. military bases still remain in Kanagawa, including Camp Zama ( Army), Yokosuka Naval Base, Naval Air Facility Atsugi ( Navy). [8] 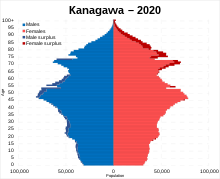 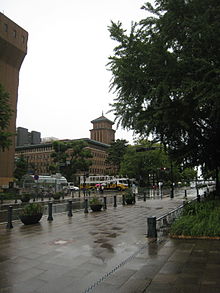 Prefectural office of Kanagawa in Yokohama 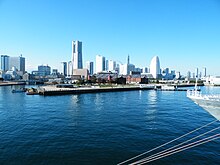 Kanagawa is a relatively small prefecture located at the southeastern corner of the Kantō Plain [11] wedged between Tokyo on the north, the foothills of Mount Fuji on the northwest, and the Sagami Bay [11] and Tokyo Bay on the south and east. The eastern side of the prefecture is relatively flat and heavily urbanized, including the large port cities of Yokohama and Kawasaki.

The southeastern area nearby the Miura Peninsula is less urbanized, with the ancient city of Kamakura drawing tourists to temples and shrines. The western part, bordered by Yamanashi Prefecture and Shizuoka Prefecture on the west, [12] is more mountainous and includes resort areas like Odawara and Hakone. The area, stretching 80 kilometres (50 mi) from west to east and 60 kilometres (37 mi) from north to south, contains 2,400 square kilometres (930 sq mi) of land, accounting for 0.64% of the total land area of Japan. [12]

Topographically, the prefecture consists of three distinct areas. The mountainous western region features the Tanzawa Mountain Range and the volcano Mount Hakone. The hilly eastern region is characterized by the Tama Hills and Miura Peninsula. The central region, which surrounds the Tama Hills and Miura Peninsula, consists of flat stream terraces and low lands around major rivers including the Sagami River, Sakai River, Tsurumi River, and Tama River. [12]

The Tama River forms much of the boundary between Kanagawa and Tokyo. The Sagami River flows through the middle of the prefecture. In the western region, the Sakawa runs through a small lowland, the Sakawa Lowland, between Mount Hakone to the west and the Ōiso Hills to the east, and flows into Sagami Bay. [11]

See also: List of cities in Kanagawa Prefecture by population 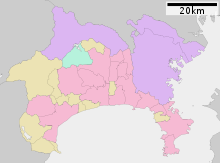 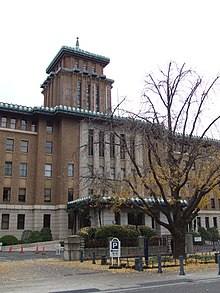 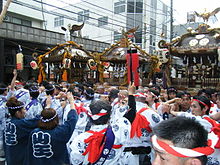 Kanagawa's transport network is heavily intertwined with that of Tokyo (see: Transportation in Greater Tokyo). Shin-Yokohama and Odawara stations on the Tōkaidō Shinkansen are located in the prefecture, providing high-speed rail service to Tokyo, Nagoya, Osaka, and other major cities.

The Kanagawa Prefectural Board of Education manages and oversees individual municipal school districts. The board of education also directly operates most of the public high schools in the prefecture.

Visitors attractions and places of interest

Kanagawa Prefecture has sister relationships with these places: [14]