Kailua /kaɪˈluːə/ is a census-designated place (CDP) in Honolulu County, Hawaii, United States. It lies in the Koʻolaupoko District of the island of Oʻahu on the windward coast at Kailua Bay. It is in the judicial district and the ahupua'a named Ko'olaupoko. It is 12 miles (19 km) northeast of Honolulu – over Nu‘uanu Pali. The population was 38,635 at the 2010 census. [1]

In the Hawaiian language Kailua means "two seas" or "two currents", a contraction of the words kai (meaning "sea" or "sea water") and ʻelua (meaning "two"); it is so named because of the two former fishponds in the district ( Kawainui and Kaʻelepulu) or the two currents which run through Kailua Bay. [2]

During the reign of King Kākuhihewa and his successors, Kanekapu, Kahoowaha, Kauakahiakahoowaha, and Kualiʻi, Kailua replaced Waikiki as the residential seat of the Oʻahu Rulers ( aliʻi nui of Oʻahu). Many ancient temple ruins, such as those at Ulupo Heiau State Historic Site, are in the area. [6]

Kailua Beach is crescent-shaped, about 2.5 miles (4.0 km) long, and ranging between 50 and 150 feet (15 and 46 m) wide. The ocean bottom fronting the beach slopes gently and beautifully to overhead depths without any coral heads. Light to medium waves support surfing and bodysurfing. The steady trade winds make Kailua Beach a top windsurfing and kitesurfing destination. Robby Naish, first World Champion of windsurfing and Professional Windsurfers Association Hall of Fame inductee, grew up in Kailua. [7] [8] [9]

Sea kayaking and stand-up paddleboarding to the protected seabird sanctuaries Flat Island and the Nā Mokulua, popularly known as "the Mokes", have become increasingly popular water activities at the beach. 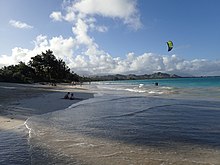 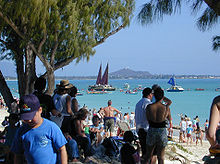 Kaʻōhao (pronounced  [kəʔˈoːhao]) is the earliest known Hawaiian name for the place known as "Lanikai." Kaʻōhao means "the tying" and is derived from an old story in which "two women were tied together here with a loincloth after being beaten in a kōnane game". [12] Kaʻōhao was commercially developed in the 1920s and renamed "Lanikai." [13] It is now an unincorporated community in Kailua on the windward coast at Kailua Bay. Lanikai Beach was rated as one of the top ten beaches in the world by Sherman's Travel Magazine. [14] The area is known for its white powder-like sandy beach and its hiking trail along the Kaʻiwa Ridge to the World War II military bunkers commonly known as the "Lanikai Pillboxes". [15] Because of its small community and easy access to its famous beach, Lanikai has one of the most expensive real estate markets in Hawaii. [16] It is served by Kailua's zip code, 96734.

Kailua has a tropical rainforest climate.

Historically, Kailua was an ahupuaʻa, or area of land ruled by chief or king and managed by the members of the ʻaliʻi.

The Hawaii Department of Public Safety operates the Women's Community Correctional Center; [21] it was defined in the Maunawili CDP as of the 2000 U.S. Census, [22] but was redefined as being in the Kailua CDP as of the 2010 U.S. Census. [23] NBC News stated that the prison was in Kailua. [24]

The Hawaii Department of Human Services operates the Hawaii Youth Correctional Facility (HYCF), [25] which was defined as Maunawili by the Census Bureau in 2000, [22] and as Kailua by the same organization in 2010. [23] The United States Department of Justice also stated the facility was in Kailua. [26]

Barack Obama has taken winter vacations in 2008 & 2009 in Kailua and in the rented, ocean-front house Plantation Estate in the Paradise Point Estates in 2010, 2011 & 2012. The house was built by developer Harold Kainalu Long Castle, who also lived there. [27] Obama also took a vacation break in August 2008 at a different Kailua house, Oahu Lani, during the 2008 United States presidential election.

The arrival of Obama as well as various social media and travel sites have contributed to Kailua becoming overrun by tourists looking to get out of Waikiki. [28]

The Hawai'i Department of Education operates the public schools. [23]

Mokapu Elementary School is on the nearby Marine Corps Base Hawaii (MCBH), outside of the CDP but with a Kailua address. [41]

Catholic schools of the Roman Catholic Diocese of Honolulu:

Movies and TV shows that have been filmed in Kailua include:

Kailua hosts various events throughout the year, from block parties to fireworks. [46] 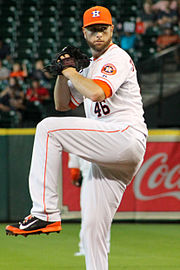