From Wikipedia, the free encyclopedia
Subspecies of rodent

The Kaibab squirrel (Sciurus aberti kaibabensis) is a tassel-eared squirrel that lives in the Kaibab Plateau in the Southwest United States, in an area of 20 by 40 miles (32 by 64 km). The squirrel's habitat is confined entirely to the ponderosa pine forests of the North Rim of Grand Canyon National Park and the northern section of Kaibab National Forest [1] around the town of Jacob Lake, Arizona.

This squirrel is not found anywhere else in the world. [2] In 1965, 200,000 acres (810 km2) of Kaibab squirrel habitat within Grand Canyon National Park and Kaibab National Forest were declared the Kaibab Squirrel National Natural Landmark. [3] 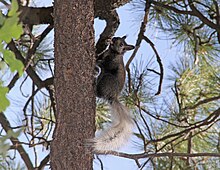 Kaibab squirrels usually have a black belly (which is sometimes gray), white tail, tufted ears and chestnut brown head. [3] The tufts on the ears grow longer with age and may extend 1 to 2 inches (2.5 to 5.1 cm) above the ears in the winter, and may not be visible in the summer. 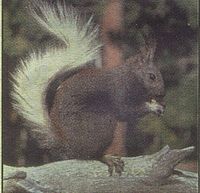 In the past the Kaibab squirrel was given species status (Sciurus kaibabensis) but today is considered a subspecies of the Abert's squirrel, (Sciurus aberti). [6]

The Kaibab squirrel is an example of evolution occurring through geographic isolation, but not because of the canyon. [2] Compared to the Kaibab squirrel, the Abert's squirrel, with its several subspecies, has a much broader distribution and is found on the South Rim of the Grand Canyon. The difference between North Rim and South Rim Abert's squirrels has given rise to the commonly held but incorrect assumption that the canyon itself acted as a barrier preventing gene flow between the two populations. However, modern Kaibab squirrels are descended from populations of Abert's squirrels that dispersed into the Grand Canyon area following the last Ice Age. [7]

As the climate warmed, ponderosa pine stands and the Abert's squirrels living there were limited to areas of high elevation like the Kaibab Plateau. These isolated populations eventually became modern Kaibab squirrels and, as the climate cooled again and ponderosa pines once again grew at lower elevations, other Abert's squirrel subspecies returned to the Grand Canyon area, filling in their former niches on the South Rim.