Kahuku (Hawaiian pronunciation:  [kəˈhuku]) is a census-designated place (CDP) in Honolulu, Hawaii, United States. In the Hawaiian language, ka huku means "the projection", presumably a reference to Kahuku Point nearby, the northernmost point of land on the island of Oahu. [1] As of the 2010 Census, Kahuku had a population of 2,614. [2]

There were 509 households, out of which 43.2% had children under the age of 18 living with them, 59.3% were married couples living together, 14.3% had a female householder with no husband present, and 21.2% were non-families. 19.8% of all households were made up of individuals, and 11.0% had someone living alone who was 65 years of age or older. The average household size was 3.96 and the average family size was 4.63.

The ZIP Code for Kahuku is 96731. In the mid-1970s a popular television game show, The Diamond Head Game, was contested on the grounds of Del Webb's Kuilima Hotel (today the Turtle Bay Resort), located just to the west. At the end of each show the announcer would say, "If you plan to be in Hawaii, send a self-addressed, stamped envelope to the Diamond Head Game, Kahuku, Oahu 96731." The Fox TV series North Shore was filmed there in 2004. [7]

Kahuku is also home to one of the few remaining family-owned farms in the area: Kahuku Farms. Educational tours are given several times a week, though private tours can be scheduled in advance. The farm also runs a small farm-to-table cafe. [8] [9]

Places of interest in the area include beaches, hiking, fishing, art galleries, and several shrimp trucks in the vicinity. [10] 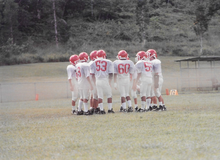 Many of the people in the Kahuku community and in the football community have Samoan or Tongan roots [11] and high school football has become quite important to them. Kahuku High School in this small, rural, coastal town on the North Shore of Oahu has produced some of the best football players in the United States. The players are regularly scouted by American colleges and universities. [12] [13] Many end up playing professionally for the National Football League. [14]

The Honolulu Police Department operates the Kahuku Substation in Kahuku. [15]