Kahramanmaraş is traversed by the northeasterly line of equal latitude and longitude. 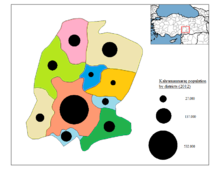 The population of the province in 2012.

Air pollution in Turkey is a chronic problem here, in part due to the coal-fired Afşin-Elbistan power stations. [2]

Kahramanmaraş has historically been famous for its gold. The textile industry is relatively new and mostly machinated.

The province's most famous culinary speciality is Dondurma, also called " Maraş ice cream", available in specialist Ice Cream shops throughout Turkey. The ice cream has an elastic consistency and is served with knife and fork, often accompanied by a slice of baklava. It melts in the mouth while chewed, with a consistency similar to bubble gum.

Maraş red peppers (called 'kırmızı biber') are also well known for its aroma, Vitamin C content, and moderate hotness. Maraş pepper is different from far-east chilies as dried with support of Scientific Investigations and Universities which contains no aflatoxin and no diseases.